Plans for a Managed Camp at Juniper Ridge

After years of controversy at Juniper Ridge, the City of Bend plans to build an RV park and campground for people without homes on the property within a few months.

The 1,500-acre City-owned property in northeast Bend was primarily designated for industrial development. But only a few new businesses have moved into the area over the last decade and the site has instead become a camping spot for more than 100 people without permanent shelter. 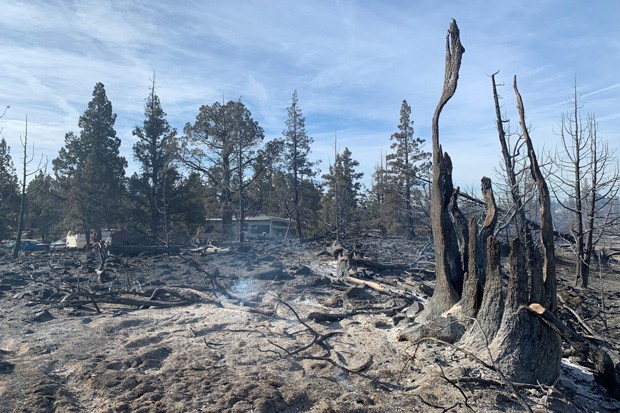 Last year, the City cleared the homeless camping site at Juniper Ridge in order to build a sewer pipe. During the Oct. 21 Bend City Council meeting, city staff presented plans to put a new 6-acre managed camp off an extension of Cooley Road, near the site of a future public works building, and not far from where the campers lived before the sewer pipe project. The City is currently assembling an Emergency Homelessness Task Force to help coordinate the management of the camp between the City, Deschutes County, neighborhood leaders and nonprofits, according to a City press release.

Last year, after the campers were forced off the property near Cooley Road, some of them moved north and closer to a series of railroad crossings, where two vehicles got stuck on the tracks during separate incidents. One of the cars caused a fire and hundreds of evacuations in nearby neighborhoods this summer, according to Jon Skidmore, assistant city manager.

BNSF Railway informed the City that it wasn't doing a good job managing the crossings on City property and so the railroad might revoke the City's main access point to Juniper Ridge on the north end of the property. Eventually, the City may install lockable swinging gates near the tracks to help address the issue, Skidmore said.

But before the City moves forward with the gates, it must help move some of the campers away from the north end of the property near the tracks.

The City wants to build the new site as soon as possible and maintain it for the next couple of years in order to avoid conflict with BNSF. Housing advocacy groups such as the Central Oregon Homeless Leadership Coalition have been lobbying the City for years to help fund and support the establishment of a legal camp on City-owned land. Eventually, the City wants to build a more permanent campground and RV park at Juniper Ridge.

City Councilor Barb Campbell has been pushing for an established camp for years.

"I couldn't be happier about this," she said at the Oct. 21 meeting. "It's about time we try to treat people more humanely."

Some of the land on Juniper Ridge may be rezoned for residential development in the coming years.

According to the Homeless Leadership Coalition's point-in-time count, 968 people are without shelter in Central Oregon in 2020, including 203 children under the age of 18. This increased 10% since last year.