A new study of British Millennials found that 50% of them would rather use CBD to manage their mental health over prescription drugs, according to Eos Scientific.

But are the headlines about CBD's uplifting effects just a bunch of hype? We dove into the scientific literature to find out. 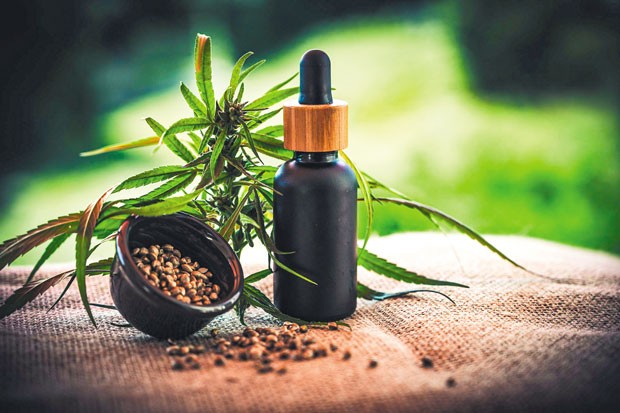 Cannabidiol, also known as CBD, is a natural compound in the cannabis plant. CBD is usually derived from the hemp plant, which is in the same family as marijuana, but doesn't get you high. Researchers around the world demonstrate that it does have antidepressant effects and can ease anxiety.

Most CBD researchers over the last two decades have used animals to test its effects, so the jury is still out as to whether CBD could eventually act as a replacement for pharmaceutical antidepressants. But cannabinoid experts have found that CBD's potential benefits for depression are connected to the way it interacts with serotonin receptors in the brain. Serotonin was identified in the 1930s as one neurochemical responsible for feelings of wellbeing, but it wasn't until 1987 that prescription drugs regulating serotonin were introduced.

Most mainstream pharmaceutical antidepressants are selective serotonin reuptake inhibitors, or SSRIs, which create blockages on receptor sites. This helps serotonin stay circulating throughout the body for longer periods. While CBD is not yet proven to boost serotonin levels, it may affect how the body's receptors respond to the serotonin already in the system.

A 2018 study in Frontiers in Immunology found that CBD has antipsychotic, neuroprotective and anti-anxiety properties. The researchers conducted a literature review of more than a dozen crippling psychological conditions such as bipolar disorder, post-traumatic stress disorder and schizophrenia. Most of this research concluded that CBD ameliorated some of the debilitating symptoms of these disorders.

One of the most promising findings from CBD research is that the compound's effects kick in almost immediately, unlike pharmaceutical antidepressants which may take weeks to start working, according to a 2019 study in Mol Neurobiol.

CBD may also have fewer side effects than mainstream antidepressant medications. Common side effects from SSRIs include sexual dysfunction, mood swings, insomnia and agitation. CBD generally does not cause similar issues. But, scientists have found that some people may experience some negative side effects from CBD, including fatigue, changes in appetite and diarrhea. High doses caused liver toxicity in mice, according to a 2019 study in Molecules. Right now, scientists have not thoroughly researched the long-term effects of CBD on humans, so it's unclear if prolonged use might produce negative outcomes.

The hemp industry is exploding in Oregon as people throughout the U.S. are turning to CBD for its uplifting effects. tweet this

Another promising finding in CBD research is that it reduces anxiety. Depression and anxiety are often co-occurring: some people yo-yo between the extremes of worrying about the future to lamenting the past. These thought patterns manifest in physical "fight or flight" symptoms like a racing heartbeat, tunnel vision and insomnia. Conversely, physical symptoms of depression could involve lethargy, oversleeping and an inability to concentrate.

A 2011 study from Neuropsychopharmacology found that CBD reduces the experience of anxiety for people who participated in a simulated public speaking experiment.

The World Health Organization concluded that CBD is generally safe: The WHO's published literature review in 2017 documented a few instances where adverse effects were connected with interactions between CBD and other medications. But establishing standards and protocols at the federal level has been a much greater challenge for those entering the hemp and CBD industry.

The Federal Farm Bill, passed in 2018, took hemp (from which CBD is derived) off the list of Schedule 1 drugs. But as is the case with marijuana products, the rules and regulations for hemp and CBD vary from state to state. In an effort to create both security in future hemp crops and uniformity in production across the U.S., politicians on both sides of the aisle in Washington, D.C., have pressured the Food and Drug Administration to adopt rules regulating CBD. Sen. Ron Wyden (D-OR) urged the FDA and the Department of Health and Human Services to bring clarity to the CBD issue last year, and asked these departments to issue interim rules in the meantime. Even conservative Senate Majority Leader Mitch McConnel (R-Kentucky) has been advocating for enforcement guidelines from the FDA. Kentucky has become a huge producer of industrial hemp, adding $100 million to that state's economy in 2019, according to the website, Marijuana Moment.

While the FDA continues to drag its feet, it does have time to issue warnings to companies that have made health claims about CBD, as well as forbidding companies from selling or marketing CBD as a dietary supplement. In a statement published last November, the FDA wrote that it cannot conclude that CBD is safe, because there is not enough scientific evidence to support this. Meanwhile, in an ironic twist that is fit for a parody on crony capitalism, the FDA states that as of now, it has "approved only one CBD product. A prescription drug product to treat two rare, severe forms of epilepsy."

At the time of print, those in the hemp and CBD industry must operate in a market where the rules could change at any moment. The U.S. Department of Agriculture became responsible for some aspects of hemp production after the Farm Bill passed, and issued some of its own proposed regulations in October. And there is also hope that congressional action may override the FDA's inaction. (Scott Gottlieb, former commissioner of the FDA, said this is the only way to get CBD rules through in a timely manner, according to Marijuana Moment.) A bipartisan coalition of lawmakers introduced H.R. 5587 on Jan. 13, which would allow CBD to be marketed as a dietary supplement. It is now in the Agriculture and Energy and Commerce Committees.

Most cannabis stores in Bend sell some form of pure CBD, though it is also commonly marketed as a product in combination with THC.

Peter Winsor, general manager of Jenny's Dispensary on NE Third Street, sometimes suggests that new marijuana users try a product with more CBD than THC because then they can experience some gentle euphoria, but without the psychological intensity that sometimes comes with straight THC.

Jenny's also sells pure CBD oil and "crystalline" CBD powder which are both consumed orally. CBD is sold for oral consumption as tinctures, capsules and sprays, and can be added to coffee and smoothies.

Due to the growing popularity of CBD, hemp production has grown exponentially, even in the last two years. According to the Oregon Department of Agriculture, Oregon farmers grew around 7,000 acres of hemp in 2018 and 50,000 acres in 2019. As a result, a proliferation of Oregon companies now sell a variety of CBD products. You could also request a shot of CBD at Strictly Organic and Mother's Juice Café to top off that morning coffee. If you're not up for the dispensary experience, Oregrown on NW Wall Street near downtown Bend will deliver any number of CBD products right to your door every day of the week from 11am – 6:30pm. Dutchie also offers delivery of various products.

CBD is federally legal, and both small farmers and corporate agribusiness are hopping on the hemp-production train. As more people experience CBD's uplifting properties, scientists from around the globe are producing a growing body of research that provides hard data to back up the claims that CBD offers a promising alternative to antidepressant pharmaceuticals.

CBD is not just a trend among the generation that brought us avocado toast: Baby Boomers are the fast-growing segment of consumers of CBD products, according to the 2018 State of Cannabis Report.

Correction: The original version of this story stated that Peter Winsor was the owner of Jenny's Dispensary. He is the general manager. The Source regrets the error.