Play Through the Pain 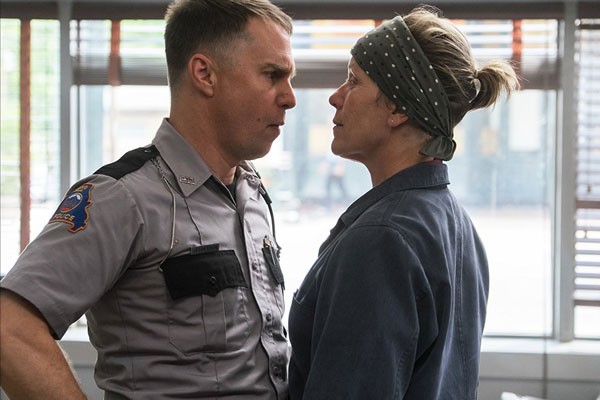 I am not what you would call an unbiased observer when it comes to the work of Martin McDonagh. He's responsible for my favorite play ever written, "The Pillowman," which I've driven several hours to see performed live and also directed locally. I've seen his show "A Behanding in Spokane," on Broadway during its original run, which featured Anthony Mackie, Zoe Kazan, Sam Rockwell and Christopher Walken. The two movies he's written and directed, "In Bruges" and "Seven Psychopaths," are all-time favorites of mine.

All of this is to say, I'm like the Fox News of critics when it comes to "Three Billboards Outside Ebbing, Missouri." I might proclaim to be fair and balanced, but we all know fake news when we hear it. McDonagh's balance of comedy, gallows humor, heartbreak, and empathy transmits right to my wavelength, causing me laughter and tears sometimes in the context of the same scene.

"Three Billboards" follows Mildred Hayes (Frances McDormand), a middle-aged single mother (divorced from the man who abused her) still dealing with rage and guilt over the rape and murder of her teenage daughter seven months earlier. She's disgusted with the local police department, which hasn't made a single arrest or found any clues, so she rents three billboards on a dead road no one uses to call out the beloved local sheriff, Bill Willoughby (Woody Harrelson). Hijinks ensue.

The film is impossible to categorize, as it's not interested in tonally matching anything we've ever seen before. "Three Billboards" is a primal scream against being forgotten, a tender and humanist look at how we exist in society and a revenge thriller that never stops building in intensity. The film dares audiences to judge it as either deeply cynical or refreshingly optimistic, but it's both, neither and some other unquantifiable emotion that only McDonagh has discovered.

McDormand's performance is breathtaking as she dances between an acidic toughness and a numbing vulnerability that makes Mildred Hayes one of the most fully realized characters of the decade. This, combined with Woody Harrelson and Sam Rockwell turning in career-best work, makes "Three Billboards" a transcendent film experience and one of the best films of the year.

The film isn't perfect since several characters exist only as easy Small Town America jokes that don't further the story, and there are a few narrative dead ends that could have been explored further. Still, "Three Billboards" is another sign that motion pictures backed by strong, independent voices aren't dead yet. This has been the strongest year for those idiosyncratic voices since 2007, when we received all-time masterpieces including "There Will Be Blood," "No Country for Old Men," "Zodiac" and "The Assassination of Jesse James by the Coward Robert Ford" all within a few short months of each other.

"Three Billboards" won't please everyone (as the grumbling audience after the screening I attended proved), but movies shouldn't. Pop culture that exists to appeal to every demographic is boring and too broad to bring anything really interesting to the table. Some pieces of culture, whether they're movies, television or music, feel like they were invented just for us, individually, and the rest of the world be damned. McDonagh's voice sounds like my conscious, begging me to be a better person even as it laughs at me when I'm not. Maybe someday I'll listen.