Plowing Streets: Who Ya Gonna Blame?

During winter events, Mother Nature is in charge—so go ahead and shake your fists at the skies if it helps.

Snow fell on Bend this past week, and for a brief window of time—based on the frenzy of commentary on social media—you would have thought we were entering a fuzzy white version of the apocalypse. A video captured from a porch on Bend's west side caught a Prius careening down a hill, with the driver inside eventually exiting her vehicle and falling onto the icy street, nearly getting hit by another careening Volvo. A video from Bend's east side captured at least four cars in a pileup, sliding collectively down the street. Yet another person captured the scene of a group of cars sliding en masse down Awbrey Butte.

From that one icy morning emerged a chorus of Karens, all looking for someone to blame. It's like clockwork: The first snow falls, and before the local snow-plow drivers have even had time to pour their morning coffee, locals are complaining that their residential street, far from being an arterial or collector street, hasn't been plowed or sanded yet. While it's true that the lesser-traveled residential streets aren't a high priority for local governments in charge of plowing hundreds of miles of roads, it's highly likely that those streets would have been clear by the time it was their turn to be cleared of the 2 inches or so that accumulated, melted and re-froze before melting once again. 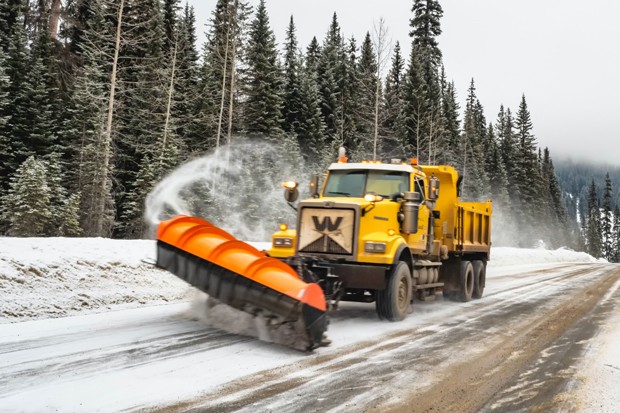 Along with complaints about the timing of plowing come the ones complaining about everything else that local cities and counties spend their money on.

Here's a small sampling of those, from our current favorite social-media site for neighborhood squabbles, NextDoor:

- "They are busy clearing and sanding Mt Bachelor! Get used to it as it's not going to change!" (Fact: The Oregon Department of Transportation, not the City of Bend nor Deschutes County, maintains that road.)

- "They were busy sanding the house less camp on Hunnel Rd. (Fact: Hunnel Road is categorized as a tier-three street for clearing, according to the City's Priority Plowing & Sanding Zones map.)

- City of Bend wants everyone to move here yet they don't take care of the conditions. (Fact: "City of Bend" has little to no control over who moves here.)

- "Time for a wholesale change..." (Fact: Mexico is pretty nice this time of year.)

That small sampling of commentary gives one a sense of the thinking that emerges the second the flakes fly. The chorus died down a bit once the ice that accumulated for roughly 24 hours was again melted, but it will be back again: The cries for someone to do something to fix their very real problem of needing to get somewhere faster than the current conditions allow.

And even while we chuckle at the often-unnecessary commentary that emerges on social media around every weather event, it is there, too, where we find the occasional practical person, like this one, whose comments about the pileup on Awbrey Butte stated it better than we could:

"...there are times—like the other day—when the weather conditions make it impossible to maintain traction. This location is classic for this condition as the roadway is shaded, it is steep and it is severely cambered. I've seen plenty of cars end up in both sides of the park. I've seen plows on the sidewalk and sideways. Even 97 was closed at the same time and it had plenty of treatment. Hell, even I-5 got shut down. That you think the city should be out clearing every street in the middle of [a] storm is peak entitlement."

During winter events, Mother Nature is in charge—so go ahead and shake your fists at the skies if it helps. For those who desire a bit more information, might we suggest a look at the City of Bend's and Deschutes County's winter streets plans webpages, so as to get a grip on which streets will be serviced first? And for those with concerns, the service request page on the City of Bend's site will likely bear more fruit than a social media rant.