Plug it in, plug it in | Local News | Bend | The Source Weekly - Bend, Oregon

Plug it in, plug it in 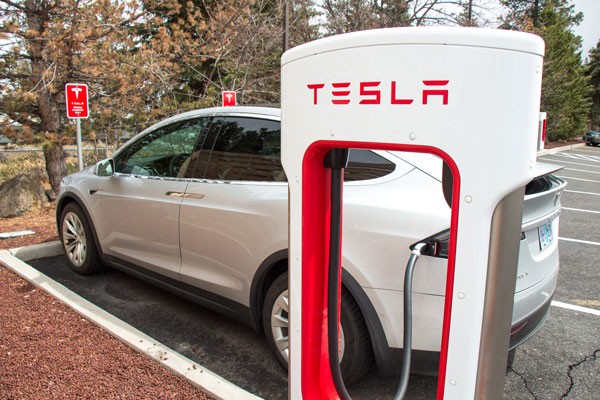 If you've noticed a few more Teslas or Nissan Leafs on the road recently, don't be too quick to assume that they're all visiting from California.

New electric vehicles are capable of traveling longer distances on a single charge than the first generation—and simultaneously becoming more affordable. Tesla released its Model 3 in 2017 starting at $35,000, competing with the similar price point of the Chevy Bolt EV and a growing number of other manufacturers. It's not a bargain basement price, but it certainly creates an opportunity for middle class individuals to own an electric car. To top it off, maintenance is often cheaper than a typical combustion engine because electric cars have fewer moving parts.

Oregonians are fortunate enough to have access to the West Coast Electric Highway, making it a breeze to travel up and down the coast, often without having to wait longer than 30 minutes for a full charge at a fast charging station. That's if you have the right plug.

For some time, the CHAdeMO style plug was the standard for vehicles capable of quick charging—and still is for most Asian car manufacturers. However, as anyone with an Apple device can attest, the introduction of a new standard or proprietary ports can cause some growing pains.

"Unfortunately, all of the European and U.S. manufacturers have recently adopted different standards called CCS and so we are actively looking for funding to upgrade those stations so that they'll be able to support the full range of EVs that are on the road," said Andrew Dick, automated and electric vehicles advisor at ODOT.

There are also private companies installing fast charging stations as well, including Tesla who uses its own proprietary plug.


"But in every other direction you can drive all over Oregon. For 20 bucks a month you can get this little key fob and you can use all of those quick charge stations for free." —Henry Abel tweet this

Remember when Volkswagen got into some trouble for installing "defeat devices" in their cars, programmed to pass emissions tests—and then lied about it? Well, a partial civil settlement with the EPA in 2016 required Volkswagen to invest $2 billion in ZEV (Zero Emission Vehicle) charging infrastructure across the U.S. The Volkswagen-funded Electrify America was created to meet this goal—and Oregon has already benefited from the first cycle of the program.

"[Volkswagen] identified both Portland and Seattle as early opportunities for deployment—to sort of target metro areas—and they also identified I-5, I-90 and I-84 as some of their early corridor charging targets," said Dick.

Gov. Kate Brown's 2017 executive order 17-21 set goals to encourage the widespread adoption of electric vehicles in Oregon to reduce greenhouse gasses and address climate change—including increasing registered EVs in Oregon to 50,000 by 2020. That's more than three times the current number of registered vehicles in the state, which is just over 16,000.

Brown, ODOT and other agencies in Oregon have proposed more key areas in Oregon for Electrify America to invest in during its Cycle 2 of funding projects. In an investment proposal jointly prepared by Washington and Oregon dated March 1, Bend is noted as a tourism destination that, if developed, would be a "high utilization charging" opportunity. In other words—lucrative for Volkswagen.

The state of Oregon is preparing for an increase in EV infrastructure needs. In 2017, Oregon adopted new building codes requiring 5 percent of parking spots in new construction to be ZEV-ready for cities with more than 100,000 people.

Bend isn't quite there yet, but it's looking like it quickly will be.

Bloomberg New Energy Finance estimates that more than half of all new cars sold worldwide will be electric by 2040. ODOT has installed a network of 44 DC fast chargers across the state, each paired with a Level 2 charger that takes longer to charge—taking 8 hours to charge a Nissan Leaf from empty versus 30 minutes for a Level 1 fast charger. According to plugshare.com, there are 16 charging locations in Bend, two of which are fast chargers.

It can be tricky planning a trip out of town depending on the model of electric car you own and where you are headed. Henry Abel works in community outreach for Pine Mountain Sports in Bend. He and his wife have owned a Nissan Leaf for the past three years and say the only downside is if you need travel a long distance in a hurry.

"You can't go east of here and you can't drive to Kalamath Falls," said Abel. "But in every other direction you can drive all over Oregon. For 20 bucks a month you can get this little key fob and you can use all of those quick charge stations for free."

Abel is a renter himself, but said he lives in a single-family home in Bend with his wife. They were worried about having to install a special charger in the garage for their electric vehicle, but learned the battery could be charged from an ordinary 110 volt power outlet in the garage. However, it takes about a full night of sleep.

"Even if you have a charging station right by your house, you'd have no reason to use it," said Abel. "You would just wake up in the morning and your car would be fully charged. The other thing is you don't even have to have a Level 2 or fast charge station in your garage."

Still, as electric vehicles become more popular—and cheaper—the need for fast charging stations readily accessible in town will increase, as plugging into an outlet isn't necessarily an option to those living in apartments or condos.

Gillian Ockner, a senior policy analyst for the City of Bend, was asked by ODOT to put together a list of opportunities for Volkswagen to consider. Ockner, along with Visit Bend—an economic development organization—reached out to hotels downtown and in the Old Mill district to see who'd be willing to throw their name in the hat as being possibly interested in installing EV charging stations on their property.

Ockner said the city doesn't have an EV infrastructure plan yet, but EV charging stations at multi-family buildings has been a part of the conversation.

If Volkswagen decides to invest in charging stations in Bend, installation would begin in July 2019.