Pod Lands at the Moon

Bendites now have another food cart pod option in downtown Bend, with the opening of The Office on the Silver Moon Brewing property off Greenwood Avenue. The five carts on the property include Rush's Squares, a Sicilian-style pizza cart; Chicken Strut, offering—you guessed it—chicken; The Bob, offering European-style kebabs, felafel and mezza; Luckey's Woodsman, an outdoors-inspired cart that first opened this past winter in the parking lot of Mt. Bachelor; and Whappo's, featuring Caribbean-style cuisine. On my first visit to The Office, I opted for a Coconut Curry Chicken Bowl from Whappo's—a flavor explosion that will have me coming back for more.

"With everything that has happened in the restaurant business, we were looking for a model that is sustainable," said Silver Moon Director of Brand Experience Steve Augustyn. "Food carts are something that Central Oregon is known for, and it's pandemic-proof." Now, instead of serving food inside Silver Moon's current pub space, the food offerings required of bars in Oregon move to the five carts. 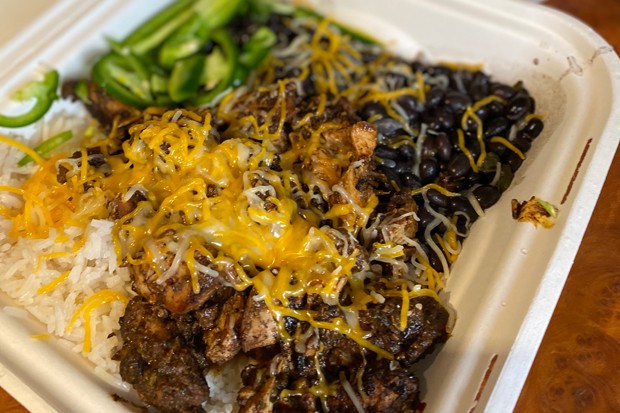 "We view our property like a compound—something for everyone," Augustyn told the Source. Located downtown but slightly off the beaten path, with its food carts tucked behind the building and adjacent to the Bend Parkway, Silver Moon aims to make the property a destination spot. The brewery's purchase of the boxing gym just east of its existing taproom also mean more expanded offerings. A cocktail lounge will soon move into the current taproom space, with the boxing gym space to be called the "Green Room," offering games and other fun stuff. Silver Moon hopes to have the Green Room open by the middle of June, Augustyn said.

Some of the other carts—and their owners—will already be familiar to locals: The Bob floated around downtown Bend before moving to Silver Moon, Rush's Squares is owned by the people who operate Pine Marten Pizza at The Bite in Tumalo and Chicken Strut is the latest offering from John Morris, owner of Southern Accent in 9th Street Village on the east side of Bend, along with his wife. Meanwhile, the owner of Luckey's Woodsman, Jackson Higdon, has been dually operating his cart, serving hungry skiers and snowboarders piles of chicken strips at Mt. Bachelor, and operating Silver Moon's kitchen for the past six months. Higdon named his cart after a chain of restaurants launched by his grandfather Curtis Luckey in Springfield, Oregon, in the 1950s.

"I tear up just thinking about it," Higdon told the Source. "I never got a chance to talk to him or my grandma Jean about what it was like running a restaurant. And oddly enough, my first job was in a restaurant." 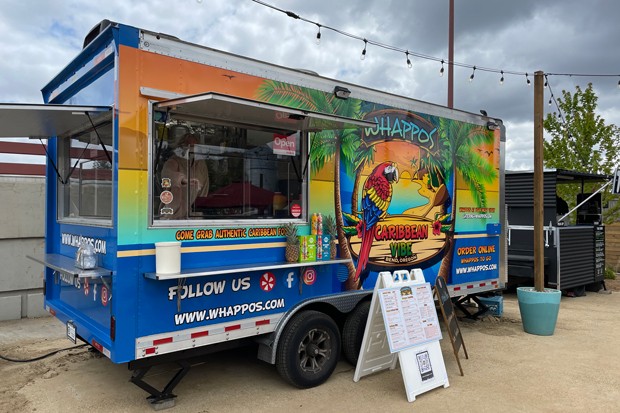 In addition to serving salads, charred meats and sandwiches, Higdon also has plans in the next month to offer "camper kits," he describes as "packable + tactical + soggy-free guaranteed." The idea, Higdon said, is to offer gourmet meals that outdoor enthusiasts can pick up and take on their adventures. A Kickstarter campaign to get the idea off the ground is already underway.

"My theme is an elevated backcountry cuisine," he said. "To me that means these meals are inspired by or inspired for the outdoors.

To kick off the opening of the space, Silver Moon will hold a grand opening Friday, May 28. Patrons who visit throughout Memorial Day weekend can show their vaccination card and get a 16-ounce Silver Moon four-pack for just $1. Manager Augustyn said locals can also look forward to a four-day festival, called The Moonies, from June 23 to 26, ending with an "awards show" of local bands.