Two Central Oregonians just competed in the World Pole Art Competition. These athletes tell us what that was like.

If you thought pole dancing was just about pretending you'd chosen a career as an exotic dancer, think again. Two Central Oregonians brought their athleticism and expertise to Bologna, Italy, in December for the Pole Sport & Arts World Federation's World Pole Art Competition.

Shannon Daily, who placed third in two categories in Worlds, is a former IT nerd and flying trapeze enthusiast who discovered pole dancing late in life and has since been busy performing both locally and internationally. Andrew Krueger, who placed 7th in a men's pole art category, is a pole dancer and instructor who also has an eclectic set of hobbies and jobs including music composition, lotion crafting and knitting.

I chatted with them about the competition and the misconceptions around their sport.

Source Weekly: Tell me a little bit about the world competition.

Andrew Krueger: This was my first worlds and the very first thing I noticed—this scope with it—way bigger than I really thought. It's built very much like any other large-scale competition. There's codes of conduct. There's compulsory moves. There's all of these different tiny little weird rules to follow. It's very much like an Olympic sport, which is what they're kind of aiming for. 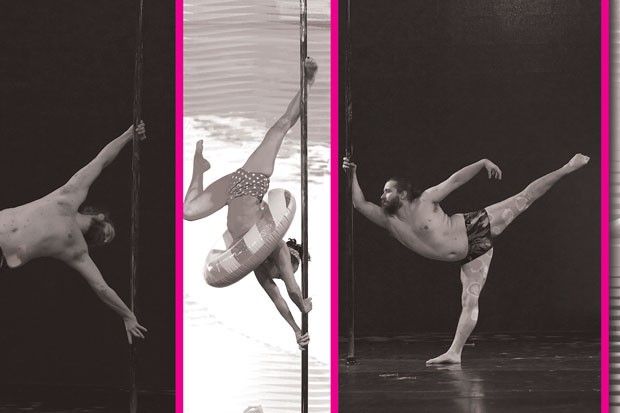 Shannon Daily: I competed in both 50+— they're both 50+ women—sport and art... I did both. So I stayed for two weekends, in Bologna, Italy. It was kind of a stressful trip, actually, to try to get going overseas, and then it wasn't as social as I usually like because, you know, because of COVID we didn't really mingle with other teams as much. Usually I like to see my friends in my age group and run around and stuff—because it's kind of strange to be 50-plus and, you know, be out there in your scoobys jumping around.

I've been to two others, and I told Andrew about these competitions, and he's sort of got interested. I was surprised he signed up!

AK: This is my first year of doing anything of this scope. I haven't competed at all since 2018. I was talking to Shannon—I was like, I'll do an amateur category and she was just like, no, you should do it professionally. So I ended up signing up for this really high level category, very last minute. Basically, killing myself to get a routine together.

SW: Tell me how you both got into this sport.

AK: I started about six years ago. I had done gymnastics. I injured my ACL. I didn't even really want to be coaching at that point because I wanted to be doing it still, so I just kind of decided that was the end of my athletic career. And then one morning. I just randomly signed up for a class because I had some extra energy to kill and I wanted to try it, and literally, it was like instant obsession with it.

SD: I was really into flying trapeze, actually for about 10 years—like obsessive compulsive about it, and I love it. I went to a pole class, but it was more that jiggly kind of class. So it didn't really interest me or my friends that much. So I eventually found a girl in San Francisco who taught more pole sport. I kind of accidentally stumbled upon her because I was trying to go to a Zumba class! It was more the type of moves that I was interested in and I've been doing it for about 10 years now. Now I teach workshops sometimes and sub classes.

I do this and I did also do aerial—like lyra circus performance type stuff.

SW: When you say there's the "sport" type versus the "jiggly" type, can you explain that a little more?

SD: The first typically has more like the strip club kind of look. It's kind of nice to know but you know, I felt really kind of silly and inauthentic—all those muscles and no boobs. It wasn't until some years later that I found somebody who really did more tricks; a lot of stretchy flexibility tricks and flippy tricks and things like that.

SW: How do you explain the sport to newbies?

AK: I have people that are really athletic and really interested in trying to do the circusy, pole- type stuff immediately or not at all interested in dance or movement. And then I have people that come in and like maybe they don't feel strong enough or maybe they haven't been working out a ton and they just want something to like, get themselves moving and have some fun. Then I tell them, try exotic or a flow class or dance class. But I'm a pretty vocal supporter of all of it. I have multiple pairs of heels. They go from 6 inches to 10 inches. So anytime, I can throw on a pair of heels and have some fun or teach a class like that, I love it. It's a great space to be for all beginners.

SW: Andrew, what's it like being a male figure in this realm?

AK: Most people expect me to just be really tricky and to not be a great dancer, hilariously enough. When I was at Nationals, I actually had somebody come up and tell me they were so disappointed when I walked on stage because I had a full beard and they assumed that if I have this full beard—and I was wearing like a really basic costume because I put together a Nationals routine fast—that I was like up there to show off and do tricks and they were really shocked that I could dance.

Those interested in seeing Krueger in motion can attend the Sekse studio's "Bad & Boujee" event Feb. 25.