Central Oregon is an outdoor enthusiast's dream. Runners and athletes need only throw a stone and hit various athletic events, from races for runners and skiers, in the same weekend. But there's a race that embodies the best that Bend has to offer, all wrapped neatly into one event. From skiing and running to kayaking and biking, the Pole Pedal Paddle takes athletes from the top of Mt. Bachelor to the Deschutes River in the same day. 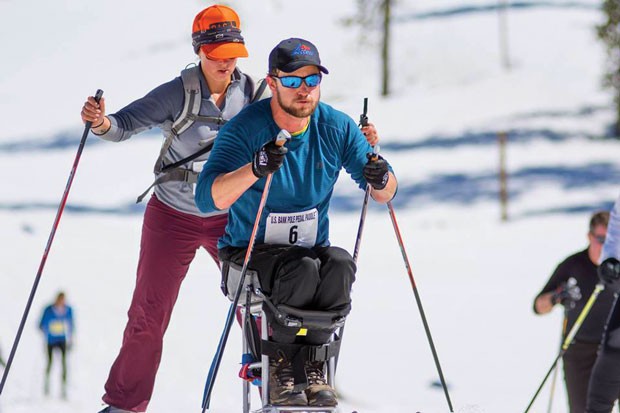 The inaugural Pole Pedal Paddle was in 1976. Amateur and pro athletes have looked forward to this Bend tradition ever since. This year, race organizers expect between 2,400 to 2,700 participants. Athletes compete solo, or as a team, to finish six legs of the race: Alpine skiing, Nordic skiing, biking, running, a canoe/kayak/SUP leg and finally, a sprint to the finish.

"It physically takes you through the whole community," says Josh Hancock, an athlete who's competed in the Pole Pedal Paddle for the past three years. "From the top of Mt. Bachelor all the way to the stadium in the middle of town—it's cool because it's a race, but it's also a celebration of the diversity of activities you can do here."

Hancock, 35, is competing with his girlfriend, Angela Bohlke, this year. The first two years he participated on teams supported by Oregon Adaptive Sports—an organization that provides one-on-one adaptive sports training for individuals with disabilities—feeling out different legs of the race before taking on all the legs himself in 2018 for his first solo race. Hancock is the first paraplegic athlete to finish the Pole Pedal Paddle solo — a feat that took careful planning and some logistical help from friends.

Adapting a six-leg race for his ability was no small task. The equipment alone cost nearly $35,000, which included customized equipment including a hand cycle, downhill road bike and sit skis. 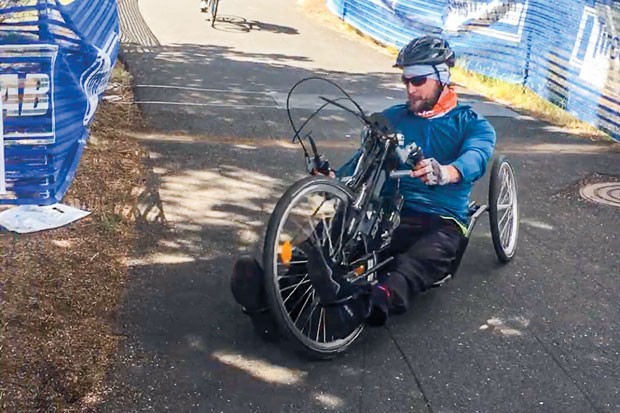 For the skiing portions, Hancock acquired an adaptive Nordic sit ski and an Alpine mono ski — both of which, he says, have a steep learning curve. Hancock took his first mono ski lessons in 2016 with Oregon Adaptive Sports, just over a year after he injured his spinal cord in a climbing accident. He was medically cleared for the sport, but tackling the mountain was a daunting task—and he was afraid of reinjuring himself.

"I had all these screws and rods in my back and I was scared of them breaking," says Hancock. "Sit skiing has a really steep learning curve, you know, you have to balance very carefully—skiing slowly on a mono ski is really hard."

While OAS has provided one-on-one training to adaptive athletes since 1996, the organization just recently piloted a handful of community programs from adaptive climbing meet ups to cycling and mountain biking, and plans to launch a full-fledged catalogue of outings and meetups this summer.

"The idea is just to create a space where people can come together and you know, try out a sport in a really fun inclusive space," says Standish, who adds that OAS is the only adaptive sports organization in the region.

Standish says OAS is supporting 10 adaptive sports teams in this year's Pole Peddle Paddle: seven teams, two pairs and one individual. Hancock and his girlfriend make up one of the pairs, and are excited to take on the race utilizing both of their strengths. Bohlke is a strong Nordic skier and runner, he says, while he can ski and road bike just about as fast as anyone else on the course. 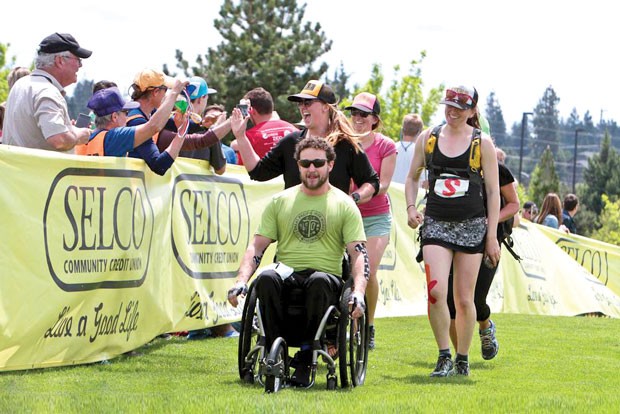 Even with two years of preparation and a team behind him, his solo race included a few, as he put it, "minorly catastrophic" events. Right at the start, while transitioning from the Alpine to the Nordic ski leg, Hancock misjudged a sharp curve in the course and flew down nearly 5 feet into orange netting.

"If it was in a movie it would be hilarious and it would have millions of views," says Hancock. "I would put some of that on YouTube, but it's also profoundly embarrassing—so it's only close friends."

Farther down the Nordic course, another skier fell and slid into him, taking him out. On the mountain bike leg, one of his derailleur cables started fraying and losing gears, leaving him stuck in a high gear for the remainder of the leg.

"I was stuck in the really high gear and just grinding it out, trying to go up that hill, and I made it," says Hancock. "It worked out, but it was a struggle and you know, even on the downhill sections I couldn't go as fast as I wanted."

When he made it to the kayak section, the rudder on his custom surf ski jammed.

"I got maybe like a hundred yards from the start and the boat just turned into the bank," he says. "The nose hit and then the current caught my little outrigger and flipped the boat over and threw me into the water." 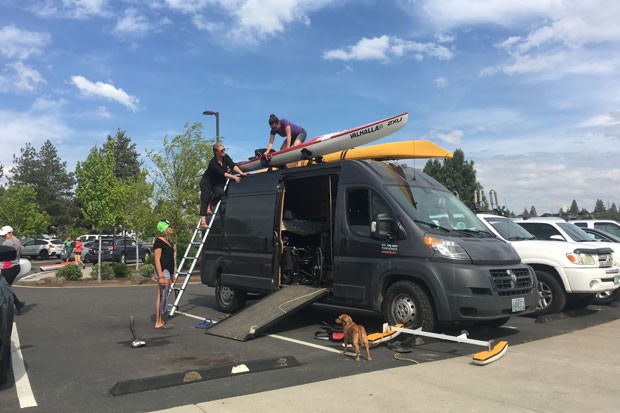 He had to abandon ship and swim back to shore, yelling for his team to grab his backup sea kayak to finish the race. He sprinted the final portion in his wheelchair, crossing the finish line with his team at his side.

"I loved it and I was thrilled to finish the race. It was a combination of, you know, really three years of preparation," he says.

After the 2019 Pole Pedal Paddle on May 18, Hancock isn't taking any breaks. He has a full summer of whitewater rafting and river floating on the Salmon and Rogue rivers planned.