Ten years is a long time to be doing anything. Even only after a year in, that thing can become an integral part of your life. For Polecat, a folky-bluegrass band from Bellingham, Washington that thing was performing music for people that made them happy.

Now, after a decade-long run as a beloved group up and down the west coast, Polecat is officially retiring from the music circuit and closing out with four final shows in March. The five-piece will kick things off in Bend on March 4 at the Volcanic Theatre Pub, along with stops in Portland and Seattle before going out with a bang in their hometown of Bellingham. 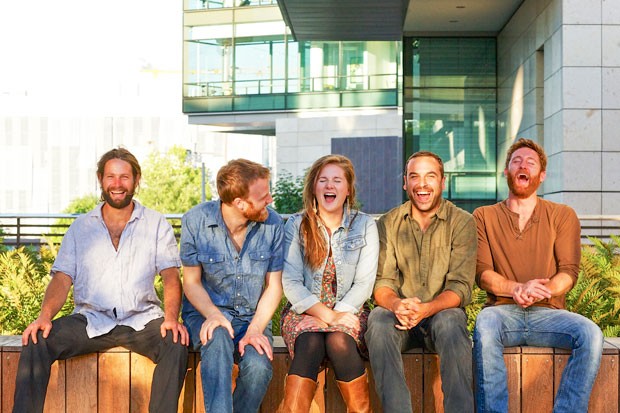 "Bend has just always been—I feel like since the first time we played, Bend just kind of gets us. It's just always been killer and the crowds have been so great over the years," says frontman Aaron Guest. "A few of us, if we ever moved, anyway, Bend would have been a contender for sure."

Polecat's first booking agent was actually Parallel 44 Presents' Gabe Johnson, a Bend-based musician and concert booker. The band played many times in Bend, including stints at McMenamins, 4 Peaks Music Festival, Volcanic, Pickin' and Paddlin' and more, so the ties to Central Oregon are strong.

Thinking of where the band is at now, Guest fondly remembered the group's beginnings starting off playing Monday nights in a taproom in Bellingham.

"We started with a weekly up here, at Boundary Bay Brewery. I had a weekly piano gig that I had just started for a few months—and actually I still have that gig," recalls Guest. "I wanted to approach this band as a potential professional endeavor. I took it seriously from day one and everyone I brought on board I kind of handpicked from the scene in Bellingham. I ended up with some of my absolute favorite performers. I knew it was going to be special just because of that."

For six years, Polecat was playing around 100 shows a year. Now, the band members are turning to other personal projects. Guest will focus on studio work and his solo music, playing as "A.guest." Fiddle player Cayley Schmid is becoming more involved with producing music festivals and concerts in Bellingham. Drummer Karl Olson plays percussion for Polyrhythmics. Guitarist Jeremy Elliott now lives in Portland and is diving into the music scene there. And bassist Richard Reeves is living on the San Juan Islands in an art commune, restoring wooden boats and playing music.

"We've all kind of grown more into our own personal lives and endeavors pretty naturally. After 10 years of us five, we never did any subs or cancellations or anything, it was always us five," says Guest. "That's why when we decided when we wanted to end it, we wanted to really do it. Not fizzle out. It feels right. Like it's our choice."

Over the past decade, Polecat released three studio albums, one live album, an EP and two singles. And you can't forget about the countless memories or shows the band experienced with fans.

"The purpose of our music, we've always felt, is to bring joy and to make people move. To make people smile. It's really, for the most part, happy kind of triumphant music," Guest says. "To have people react to our original music like that over the years has always been really special. It was never lost on us as far as getting to connect with our audience through original music like this. We hope that people have great memories of Polecat shows."

10 Polecat Songs for 10 Years
(chosen by me, in no particular order)