Sometimes all you can do is laugh

"The Death of Stalin" may well be the hardest you will ever laugh at mass murder. I know that sounds wrong, but go with me for a minute. By taking the death of the brutal autocrat and then crafting a timely political satire around it, filmmaker Armando Iannucci once again manages to create belly laughs between some fairly nuanced systemic commentary.

Iannucci is the profane brain behind Alan Partridge, "In the Loop" and "Veep," which all examine the states of power controlled by men with tiny souls, massive egos and bottomless ambitions. That sounds familiar. Where have I heard of someone like that before?

After Stalin suffers a massive cerebral hemorrhage, the members of his Central Committee rush to take power—double crossing, plotting murder and generally attempting to destroy one another. In any other movie, all of that would play perfectly as a white-knuckled Kremlin political thriller, but when the central cast member is Steve Buscemi playing Nikita Khrushchev, the film becomes something different altogether. 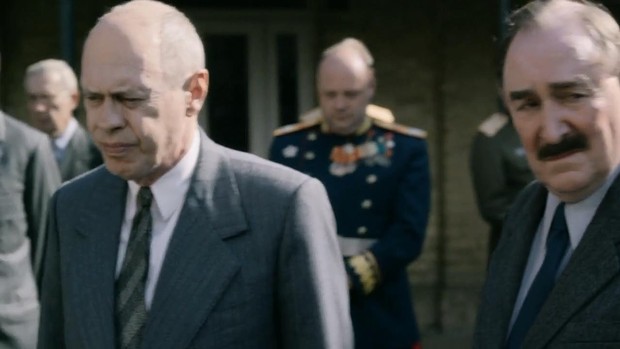 As wonderful as it is to see Buscemi sinking his weird teeth into some of the most spitefully hysterical dialogue of all time, it's Simon Russell Beale, as Lavrentiy Beria, the head of the Soviet secret police, who demonstrates that he's easily the finest stage actor of his generation. He was so astounding as Falstaff in "Henry IV, Parts I & II" as to make the role unquestionably synonymous with his performance.

He does the same with Beria, a human monster who not only expanded the Gulag labor camps, but oversaw the secret detention facilities and purging of tens of thousands of people. At the time of his death, he was held personally responsible for the abduction, rape (and sometimes murder) of hundreds of women. Beale makes Beria horrifying, but also pathetically human, and watching him verbally spar with the likes of Buscemi, Jeffrey Tambor, Jason Isaacs and Michael Palin is electrifying.

In times of political divisiveness, satire can be a warm blanket for those seeking some sense of sanity in the world. "The Death of Stalin" doesn't attempt to say that it could be worse, but instead gets a lot of mileage from that old chestnut, "Power tends to corrupt and absolute power corrupts absolutely."

Men like Khrushchev, Beria and (successor to Stalin) Georgy Malenkov could talk all they wanted to about making the Soviet Union a less bloody place to live, but their minds were always too paranoid to allow for true peace. By showing these dangerous and cunning men as clowns one and all, it gives audiences a sense of connection to events that seem too unknowably large to empathize with.

"The Death of Stalin" is a modern classic, especially for those used to Iannucci's voice from "Veep." No hand holding or winks to the audience; instead, the story asks us to find the absurdity in tragedy, the hilarity in a past that will never go away. The brutality of what Stalin and his cronies did to the world is never mocked or made fun of. Instead, we're given the opportunity to laugh at the pathetic men trying so hard to grab everything they can with their tiny hearts and hands.