Blockbusters, drive-ins and alleys, oh my

Some of the most defining moments of my life took place at the local drive-in near where I went to high school in Grants Pass, Oregon. Sitting in the bed of a filthy pick-up truck watching Jodie Foster's "Contact" is where I had my first beer and kiss, within about five minutes of each other. When drive-ins started going the route of video stores and dodo birds, I was pretty dismayed and confused: Why wouldn't people wanna avoid all the strangers and see movies from the comfort of their own cars? 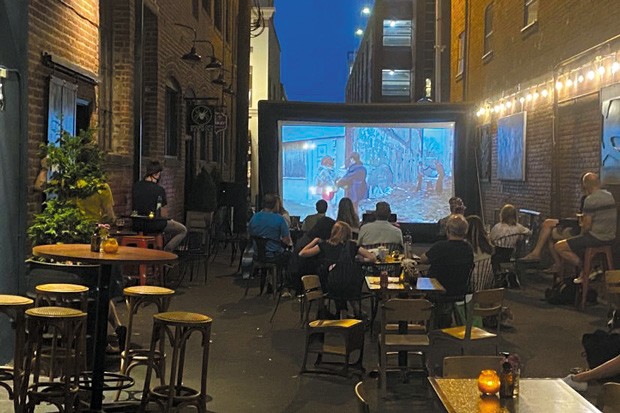 For years I've been thinking it's time for drive-ins to make their comeback and, in the era of social distancing, there really couldn't be a better time than right now. BendFilm is not only launching a pop-up drive-in, but Tin Pan Theater is projecting movies in the alley outside the theater.

Todd Looby, filmmaker and executive director of BendFilm, has the same connection to drive-ins as I do.

"When I made my first attempts at films I set up sheet screens in my parents' and friends' yards to premiere these films and it was magic," Looby explained. "A few years ago, I drove by the Milton-Freewater Drive-In on a Christmas trip to see my in-laws. It hit me then that you could do a "pop up" drive-in, and I have been slowly pushing in that direction since."

"If you had told me at any point in my life that I would be able to make a movie about renting movies and show it at a DRIVE-IN theater... I never would have believed you," says Morden. "There's something magical about a movie about movies in a nearly obsolete format (VHS/DVD) being shown at a drive-in theater which is also a mostly obsolete format. It felt like a once in a lifetime confluence of events."

For the last few weeks, Tin Pan Theater and the bar San Simón have teamed up to do Monday Movies, projecting classic films outside in Tin Pan Alley. "When the opportunity came from the city to close the alley, we immediately thought films in the alley would be perfect for both of our customer bases and, again, an opportunity to have really safe, fun, uplifting and community-focused events," Looby said. "The two Mondays we've hosted so far have been awesome. I love seeing people alive, smiling, safely dancing in their seat to the Talking Heads or Blues Brothers. Watching that, I couldn't help thinking, why would anyone want to be somewhere else?"

There is something uniquely magical about watching movies outdoors. In a time when getting packed like sardines into a Regal Cinema is seeming more and more outlandish, it's a way to keep the theatrical experience alive without sacrificing safety. Drive-Ins are making a comeback nationally, but would the business model still be sustainable post-COVID?

According to Looby: "There will have to be some changes from landowners, insurance companies, and film distributors to drive costs down as the financial gain isn't there right now. We've been lucky with such great partners as Deschutes Brewery, HydroFlask and some of the distributors and sponsors that have signed on, but you won't get the same in other towns to make the overall trend viable in the long-term without some changes."

In a time when the divides between Americans seem to be getting deeper and further apart, it really could be something as simple as "The Last Blockbuster" or "The Blues Brothers" that helps remind us of our similarities instead of our differences. More than his abiding love of movies, it's easy to tell that Looby's real passion is bridging divides and reminding people about the things we carry in common.

Looby summarizes beautifully: "All we ask is that people come out to our events and allow themselves just a couple of hours to relax, smile, laugh, and feel in the midst of strangers and even friends they haven't seen in a while. We all owe that to ourselves during such an incredibly difficult time and we will come out of this much, much better if we do engage directly." Can't argue with that.