Portrait of a Patriot

Americans are less proud to be Americans than they've been since 2001, but a lack of pride doesn't necessarily translate into a shortage of patriotism

In 2017, Americans are less proud to be Americans than they've been since 2001. But ahead of the U.S.A.'s 241st birthday, a lack of pride doesn't necessarily translate into a shortage of patriotism.

Proud to be an American?

Many are. Still, a recent Gallup poll shows a significant decline in that pride over the last year. 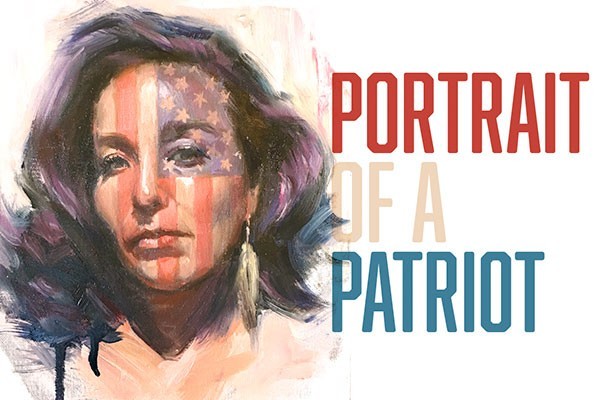 A March 2017 poll revealed that the percentage of Americans who are "extremely or very proud to be an American" dropped to a new low of 75 percent in 2017, down from the previous low of 81 percent in 2016. Back in 2001, just after the 9/11 attacks, the pride in being an American was at its highest since that poll began, at about 92 percent.

According to Gallup, the current decline largely comes from Democrats, less than 10 percent of whom approved of the president this March. On June 18, the president's overall approval rating was 38 percent—up 1 percent from a low of 37 percent in early June.

At the same time, pride in being an American isn't necessarily analogous to a decline in civic engagement. Actually, the two may have inverse correlations.

Take the case of the Bend Women's March, which drew about 3,000 people to the streets following the presidential inauguration in January—one of the most well-attended marches the city has yet seen, organizers said.

And if you've been in downtown Bend on a Tuesday since the November election, you may have noticed the crowd of demonstrators clustered on the corner of Bond Street and Greenwood Avenue, just outside the Bend office of Rep. Greg Walden (R-OR).

In past months, some of the demonstrators were there to request that Rep. Walden hold a town hall in Bend—a request he heeded in May, when about 2,000 people packed into Bend's Mountain View High School for the event.

Demonstrators have also congregated in front of Walden's office on Tuesdays to protest against the American Health Care Act, over which Walden has had at least some influence as chairman of the Committee on Energy and Commerce—the committee that released the initial draft of the AHCA in March. Other demonstrators on that corner have been there in support of Walden, and in turn, in support of the current administration's policies.

Yet, you might not know who's who and what they represent just by looking.

One of the people found on that corner in past months has been progressive activist Melissa Adams, who I previously interviewed for her involvement in the Women's March. One Tuesday this spring, Adams was passing out small flags and placards with the U.S. flag upon them—signs and iconography often espoused by a more conservative crowd. Seeing someone wield the bold colors of red, white and blue somehow automatically conjures up the notion that this person is a "patriot," a la Tea Party style. But that wasn't the case here.

Adopting some of those icons that have been associated with the one side of the political spectrum turns some of those traditional notions on their heads, and opens up a wider conversation:

When it comes to patriotism, people's definitions tend to have some common threads.

Speaking on the definition of "patriot," Adams had this to say: "A Patriot believes that we as individuals and as collective members of varied ethnic, religious, gender and gender identity groups, sexual orientations, etc. have these same rights and will stand up in solidarity to ensure that we all have these rights.

"My favorite definition of a Patriot comes from Edward Abbey, who once said: "A patriot must always be ready to defend his country against his government."

I met David—who declined to offer his last name—on a street corner in Bend, where he parks his scooter chair many afternoons, hoping to score some change from the drivers stopped at the intersection. A sign sits in his lap, announcing that he served in the Vietnam War. David says he lost a leg two years ago when he tried to break up a fight and was bitten on the leg. When that leg became infected due to diabetes, doctors had to remove it, David tells me. His definition of patriotism: "Standing up for your country," he says. "I was willing to die for them. Now I want to die. I really do."

I asked David whether patriotism should involve questioning the government. He said yes, it definitely should.

As for the ties between patriotism and the July 4 holiday, David tells me, "Just remember what July 4th's about, you know. It's about—kids don't know what it's about. A lot of people, all they're thinking about is drinking, drugging and shit."

BJ Soper, meanwhile, defines patriotism slightly differently, as: "The men and women who stand for our foundational values... the right to life, liberty, and property or as we know it now, the pursuit of happiness," he says.

Soper, who lives in Redmond, is the founder of the Central Oregon Constitutional Guard, part of the wider Pacific Patriots Network. In 2016, Soper acted as a go-between between the occupiers of the Malheur National Wildlife Refuge and law enforcement, encouraging the alleged occupiers to take a less-militant stance.

"The people who hold our constitution on a pedestal as the supreme law of the land, as intended, and those who would give their life to defend our country from all threats, foreign and domestic. Some do so in the military, others here as civilians. But it all comes down to still believing in why the United States came to be—men and women, standing up and fighting to be free."

Local activist Joanne Mina had this to say about patriotism: "My experience is that for immigrants patriotism is born from the pride we take in our work and the contribution we make to strengthen the community we live in.  Patriotism also comes from planting roots in our community, the love we have for our children and how when we see them overcome and spread their wings in this country, their home, we can't help to wish peace and prosperity for this land.

Mina, whose letter, titled, "The White People Problems Usually Discussed in Letters to the Editor" won the Source's letter of the week June 15, went on to say, "However, the word 'Patriot' also triggers fear, because of people like alleged sexual predator Bill O'Reilly that took the word Patriot to represent those that see this country built for people of Anglo European descent with Judeo-Christian faith."

Rep. Knute Buehler (R-Bend) represents Oregon House District 54—a divided district in which 46.36 percent of people voted for Donald Trump and 43.07 percent voted for Hillary Clinton during the November election. (More specifically, those were the voter turnout percentages for Deschutes County.)

"The most basic form of patriotism is exercising your right to vote. Seeking to be well-informed about issues and candidates," Buehler says. "A patriot is someone who serves and actively supports their country. This can range from upholding and participating in our basic democratic and civic institutions, serving in elected capacity, to risking one's life in the armed forces."

Dissatisfied? That doesn't mean you're not a patriot

"Without question, patriots should question their government," Buehler says. "America was proudly founded on the idea of challenging authority. Our Bill of Rights and Constitution protect the rights and voices of the minority along with a free and vigilant press."

On the act of moving for change, Mina looks back at past movements as examples of what can be possible.

"The Suffrage Movement, the American Indian Movement, the Civil Rights Movement, Occupy Wall Street, Black Lives Matter, those that work to ensure migrant workers' rights, those that opposed the Vietnam War, the Iraq War, those that oppose the wall or the Muslim ban and those that protest social injustice every Tuesday in downtown Bend are examples of Patriots," Mina said. "People that have an invested interest in shaping the progress of this nation towards justice and equality."

Of those who can't—or don't—vote, Buehler says, "Choosing not to vote is also a form of political expression. Non-citizens in America, while they may not enjoy the right to vote, do enjoy the freedoms and responsibilities guaranteed under our laws. Specifically, the right to free speech and assembly."

The differences are in how people show it

So far, the definition of patriotism is fairly universal. What can widely differ, however, is how people demonstrate that patriotism. The angry eagle meme, for one, is often seen sported by conservatives. A 1970s-style take on flag style, meanwhile, is more of a hipster fashion statement.

Geography and age were factors, too; just 57 percent of people in the U.S. West reported flying the flag, compared to a high of 69 percent in the Northeast. Of those ages 30 to 49, 63 percent flew the flag. That number increased to 65 percent of people ages 50 to 64, and 71 percent among people over age 65.

As the current president's approval rating continues to hover at record lows, many self-professed patriots seem likely to relate to Roosevelt's words to "support him insofar as he efficiently serves the country."

Indeed, many progressive activists have been galvanized by the actions of the current president. Progressive activist Frida Berrigan wrote in an article published in Salon this year: "...I'm seeing so much that's right about it in this new Trump era of engagement or, if you prefer, call it radical patriotism. I'm mad; I'm scared; I'm hopeful; I'm still in love — more so than ever — with this country Trump is trying to hijack."

Trump's approval rating was 45 percent in the days following his inauguration on Jan. 20—a day he declared a national holiday, titled, "National Day of Patriotic Devotion," in order to, according to the text of the declaration, to "strengthen our bonds to each other and to our country—and to renew the duties of Government to the people."

If "praying for it" means also taking action to improve their own lives and those of others, then many Central Oregonians are already on track.

"Reagan said that it only takes one generation to lose liberty forever," said Soper of the Central Oregon Constitutional Guard. "So who are Patriots, again? Well, they are those who stand and say I'm fighting to keep my freedom, my liberty, my right to choose my path and answer to no man. They come from all realms of life and from every corner of this country, and they would give every penny and drop of blood to make sure that we are not the generation that loses liberty for our posterity."