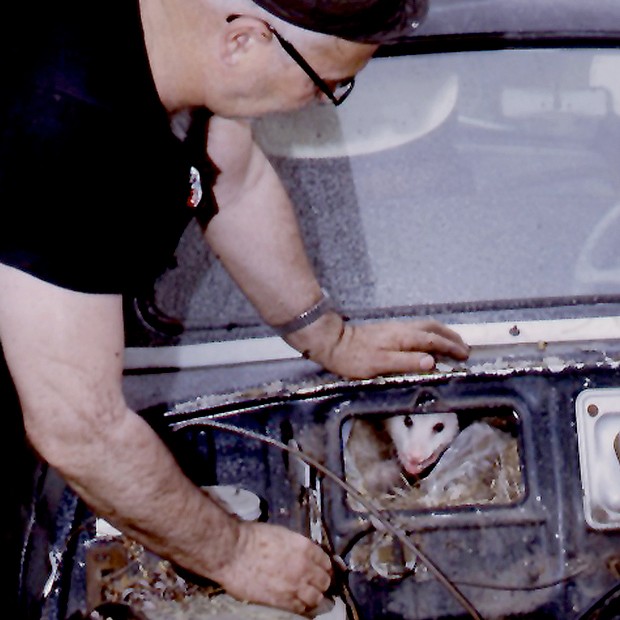 Back during the Great Depression, many people who wanted to work for a salary had a very tough time. I can remember my dad, who lost his trucking outfit in West Haven, Conn., during that time, saying to my mom, "I'm sorry mother, but I just can't make enough money working for the WPA. I've heard of some good opportunities in the Midwest and I have to see what's going on." And he was gone.

My mom took us back to her home on the farm, where I learned to milk cows, trap skunks, keep bees, swing from our great old Tarzan Tree (giving the Johnny Weissmuller Tarzan call — which I can still do today), and learn about (and love) the birds of Oregon.

Many of the men who left the South looking for jobs brought along one of their favorite foods with them, "'possum innards," in live possums. Frozen foods hadn't been thought of in those days, so the 'possums were kept alive and made the exodus as well.

Not one thought was given to the consequences of all those guys arriving with live possums in cages, boxes and the trunks of their cars. When those job-seekers arrived in the Pacific Northwest—especially Portland and the surrounding towns—they found baked salmon more to their liking and just let their live possums loose. Aside from the cold, it was sort of like home for the Virginia opossums.

If the job-seekers came through Central Oregon and released the possums because venison was tastier, the poor things probably perished because of the cold and hungry coyotes.

In the '60s, while I was employed as a naturalist with the Oregon Museum of Science and Industry, I became curious about the possum when someone put them in the same category as the local raccoon. I decided to see what was really going on.

I heard lot of complaints about how opossums were destroying local quail by eating quail chicks, causing problems for outdoor dogs and cats and living in places they weren't welcome. I then chose to take on local police as partners, who were delighted to turn over their wild animal problems to me.

Within a week I was getting lots of complaints about dogs and house cats being harassed by opossums, and possums getting into chicken houses. However, the animals causing all the excitement were raccoons, not possums.

One night in Lake Oswego I witnessed a family of raccoons teaching a very large and healthy German Shepard how to (literally) climb an apple tree in a person's backyard, while the raccoon's kids helped themselves to the dog's supper. The best call I received, however, was from the Beaverton Police Department. The officer who gave me the heads up said, "Jim, you gotta come out and see this burglary call we got."

When I got to the house there were several police cars strewn about and officers writing in notebooks. I went through the open door into the house and heard a gruff voice shout, "I tell ya' there were burglars in my house! I heard em, by god!"

Another voice said, "All right, sir, show us the place."

The first voice responded, "You bet your *** I will! Right there!"

And as I came into a hallway, a very upset and rough-looking guy was pointing to a spot on the hallway wall. He went into the garage at the end of the hallway and came back carrying a jigsaw. He plugged it into a wall socket and started to cut a hole in the wall, down near the floor. When the piece, about a foot-square, dropped out, it was followed by an adult possum and a whole bunch of plastic bags. Everyone jumped back as the possum scrambled to its feet and went charging down the hallway toward the garage.

"Hey guys!" shouted someone from outside, "here comes a possum...and...I don't believe it, it went into the old junker car right here!" The photo included here shows the possums, scattered in places all around the old cars in the guy's backyard. I heard the officer searching for burglars say, "I wonder..." and he spoke to a couple of fellow officers, "Follow me and do what I do." Then he followed the possums out into the back yard.

The first car he came to was an old Volvo. He started tapping the front bumper loudly, and the other officers did the same. In a few moments another officer out in the middle of the huge yard full of cars shouted, "Hey! There's possums running all over the place out here!" It turned out they had come upon a possum apartment complex. Just about every old junker had at least one possum living in it.

Last week Elisabeth Schneider, a pal from France, sent me an email regarding possums ridding the world of ticks. It appears that possums are fastidious and do a lot of grooming, and while doing so clean and eat ticks they "hoover" out of their fur. Researchers have discovered that the possum can destroy over 90 percent of the ticks on the possums. I just hope someone doesn't suggest importing possums to The Oregon High Desert to help control ticks...

Speaking of Oregon Museum Of Science And Industry, Virginia Opossum