It's been a little over one week since the start of the official Pacific Crest Trail hiking season on March 1, and according to Scott Wilkinson of the PCT Alliance, only approximately 75% of the normal number of long-distance permits have gone out.

Fire on the Pacific Crest Trail in Oregon

Perhaps one of the causes of lower permit numbers: the wildfires that ripped through Oregon last year.


In August 2020, lightning sparked a fire in Lionshead Canyon on the Confederated Tribes of Warm Springs Reservation, about 14 miles west of the Warm Springs community. Soon after, while the blaze still raged, a historic windstorm rapidly spread fires west onto the Willamette, Deschutes and Mt. Hood national forests.

According to Inciweb, the inter-agency fire reporting system, the Lionshead Fire swept across 204,469 acres, heavily impacting the PCT.

Although much about the extent of damage is unknown (with many affected acres still tucked under a blanket of March snow) currently a 9-mile swath of the PCT is closed. The closure stretches from roughly mile 2,027, north of Pamelia Lake, to roughly mile 2,036, north of Jefferson Park—and the PCTA isn't recommending reroutes.

"Generally, the PCTA does not describe or suggest detours for fire closures, often because the detours involve long road walks that can be impractical (and sometimes dangerous) to hikers. What we recommend is that hikers make arrangements for transportation around closures—and we leave it up to them," Wilkinson said.

In addition, Wilkinson shared that the PCT had very little of its normal maintenance done in 2020 due to the pandemic. This could mean far more downed trees across the trail than in a normal year.

"Some sections could be in rough shape. We're *recommending* that long-distance hikers postpone their hikes until 2022, but that is not a regulation or order; the PCTA does not have the authority to close the PCT." Wilkinson encourages hikers to closely inspect the list of trail closures found on the PCTA site, because closures and transects needing triage go far beyond the aforementioned Lionshead section.

“Between historic damage to the trail due to wildfires and the COVID-19 pandemic, it will be a very challenging year for anyone traveling long distances on the trail. Those who plan to hike the trail need to be adaptable, flexible, and understand that they may not make their goal this year.” —Scott Wilkinson tweet this

Another reason for a drop in thru hiker traffic is—you guessed it—the pandemic.

A few COVID measures the PCTA is recommending include doing single-day or single-overnights only, choosing to hike sections close to home. Other recommendations include avoiding resupply stops, only hiking with family or fewer than six people and following all Centers for Disease Control and Prevention guidelines.

During a regular season, only 15 to 20% of the people getting those permits end up hiking the whole trail to completion, Wilkinson said—sometimes due to cancellations, or because hikers are only hiking certain segments.

"Some people don't intend to hike the entire trail, which is 2,650 miles," observes Wilkinson. "But for those who do plan to, the attrition rate is extremely high. The vast majority don't make it for a variety of reasons... most common are injuries, running out of money—and some just decide that walking every day for six months with 30-40lbs on their back is not what they thought it would be!" To get a true picture of what this weird season on the PCT looked like, official data on permits and hikers will be available in the fall, Wilkinson said.

Hikers who do decide to embark on a longer PCT journey this year have the January 2021 refresh and release of what is essentially the PCT thru-hikers' bible. Completely revamped, the author and veteran thru-hiker, Jordan Summers, said his book, "Pacific Crest Trail: Oregon & Washington," has many improvements over the former edition. The most important of which, he shares, is, "The addition of full-page, full color maps with mileage annotations. These make navigation and planning much easier and more accurate for hikers of varied skills."


Since the guide's last iteration 16 years ago, many trail segments have been realigned, bridges installed (or demolished by flood), campsites removed, trail mileage and directional signs procured and more backcountry toilets installed. "These are all pretty vital for hikers to be familiar with," notes Summers.

About wildfire prevention on the trail, Summers, also a certified Leave-No-Trace instructor, shares, "I am sure that a bit of education on stove and fire safety would go a long way to preventing accidental fires. Alcohol [as a stove fuel] is dangerous because the flame is invisible and cannot be regulated. It's on or off. Forest duff—needles, leaves, dried grass or moss—is not a safe place for a fire. I've seen many instances of both of these, and they are scary. In the San Bernardino Mountains, I did have to extinguish a large untended fire with handfuls of snow as glowing embers were sent over the area by high winds. Twenty minutes of scraping snow for someone else's lack of knowledge."

Although the Lionshead Fire was started by lightning, 2020's human-caused fires based in Oregon included Brattain Lake, Leslie Gulch and Almeda Drive and the Beachie Creek fires. Officials suspect arson in the last two. 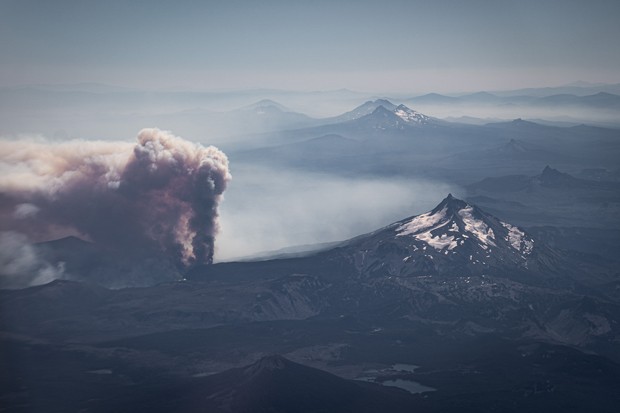 As Summers can attest, hiking amid wildfires can be scary—but he offers some advice based on experience.

"It's unfortunate that fires don't give any warning before they begin pumping smoke over your campsite. It's a gross thing to wake up to, especially if you're already rising in the dark and there's no visual indication of where the fire is located," he said. "No flames are visible. No onrush of fleeing wildlife to follow. Just gear up and keep hiking north. Cough. Cough. Check the fire reports if you have a signal; look for weather and fire alerts on your tracking device; watch for signs posted on trailside trees; follow the instructions on the signs. The smoke may be coming from a fire distant from your location, but you may still have to move forward—possibly walking into it. The amount of smoke will vary through the day, and so without other clues or instructions, hikers are somewhat on their own. If evac orders are posted, follow them to the letter."

It used to be the only statistically significant barriers to hiking the PCT were mental. With the onset of global climate change, polar vortex shifts and emerging super viruses with innumerable variants, perhaps a future iteration of the thru-hikers' Pacific Northwest bible will include some new post-apocalyptic sections.

Wilkinson's and the PTCA's final advice for this season: Prepare for differences from years past.

"We're telling everyone that 2021 will definitely not be a normal year on the Pacific Crest Trail. Between historic damage to the trail due to wildfires and the COVID-19 pandemic, it will be a very challenging year for anyone traveling long distances on the trail. Those who plan to hike the trail need to be adaptable, flexible, and understand that they may not make their goal this year."

If anything, this season's experience on the PCT will likely be a throwback to backpacking the trail a few decades ago, Wilkinson said. "This isn't necessarily a bad thing for those who seek solitude and are prepared with a wilderness travel mindset."