Poverty With a View?

Bend ranks in the top 12% for income inequality compared to other U.S. cities

Since the Great Recession and Occupy Wall Street, economists and left-leaning politicians have been calling out "the 1%," the small number of people in the U.S. that hold most of the wealth. French economist Thomas Piketty wrote that not since the Gilded Age of the 1920s—immediately preceding the Great Depression—have the American people experienced such a divide between the rich and poor.

In his book "Capital in the Twenty-First Century," Piketty argues that labor income inequality "is probably higher than in any other society at any time in the past, anywhere in the world, including societies in which skill disparities were extremely large."

But how does this track out in Bend? At first glance it's hard to miss the juxtaposition between the multimillion-dollar mansions on Awbrey Butte compared with the cars and tents on nearby Bureau of Land Management land. But are these just extreme examples? Are most people in the third-fastest-growing city in the U.S. living the prosperous, middle-class dream? I dug into some local data to find out.

Comparing the incomes of Bend's top 1% to the bottom 99%, Bend ranked 108th out of 916 cities for inequality, according to the Economic Policy Institute, which used IRS Statistics of Income data through 2015. The top 1% percent of people in Bend then made 21.7 times more than average income of the bottom 99%. Using data from the U.S. Census Bureau from 2014-2018 revealed that in Deschutes County, 25% of households made over $100,000 a year, while the bottom 25% made less than $35,000. The income poverty rate is currently 7.1%, according to Census data.

The wages of middle and lower-class Oregonians have risen slightly since 1990, while the 1%'s income has grown by 52%. The top 10th of the 1%'s wages have more than doubled to a median of $1 million in 2018. tweet this

Do people in Bend make a lot of passive income through investments and rental property? Digging into the numbers from the U.S. Bureau of Economic Analysis reveals that income in Deschutes County is 8.5% higher than in the rest of the state. This contrasts with the U.S. Census estimates of median earnings in Bend, which are only 1.3% higher than the state's. Why is there a difference?

Damon Runberg, a regional Central Oregon economist with the Oregon Employment Department told the Source that this is because the BEA data is able to track some money earned beyond wages. This passive income is often earned as a result of having more accumulated wealth—owning property and stocks, for example.

"We have a higher share of income in Deschutes County from dividends, interest and rent," Runberg said. "Much of that is the impact of a higher share of retirees, but also people who have income from rental properties or stock sales. We also had a notably higher share of personal income coming from the self-employed."

Zooming out to incomes in all of Oregon, Runberg's colleague Barbara Peniston at the OED demonstrated that the wages of middle and lower-class Oregonians have risen slightly since 1990, while the 1%'s income has grown by 52%. The top 10th of the 1%'s wages have more than doubled to a median of $1 million in 2018. Meanwhile all wage earners in the bottom 80% have seen their share of wages decrease since 1990, with the largest losses experienced by the middle class.

Runberg's data shows an upward trend in wages in Oregon between 2014 and 2017, driven by low unemployment. These gains benefited workers across the income spectrum, and increases in the minimum wage have been especially beneficial for those in the bottom 20%, according to a wage-growth study Runberg published in 2018.

Outside of income, wealth inequality paints a much starker picture. On a national level, the top 1/10th of 1% of Americans own more wealth than the bottom 80% combined, according to Bloomberg Businessweek. Wealth is defined as the sum total of everything a person owns, minus what they owe. This includes everything from a home (or many homes), to money in savings accounts, investments in stocks and bonds and retirement accounts. Debts are a combination of student loans, mortgages, credit card balances and any other bills that need to be paid. The bottom half of Americans combined have negative net worth, meaning their debts are greater than their assets.

According to Wallethub.com, people in Bend are highly leveraged. Bend ranked in the 94th percentile for unsustainable credit card debt, meaning it will take Bendites longer to pay off the debt and cost them more to do so. This could be an indication that high costs of living are requiring some to go into debt to continue to live here.

"The median income in Bend is $63,680, so middle-income housing would cost $318,400 for two full-time wage earners, using the House Price to Income Ratio of 2.5," she said. "Today, an MLS search produces 28 listings for sale in that price range, and most of them are manufactured homes."

It is impossible to know whether much of Bend's real estate has been purchased by wealthy people from outside of town over the last few decades. But Capece believes that as many people lost their homes during the Great Recession, at least some of that real estate was bought as investment property or second homes by people who had higher incomes than the average Bend worker—a pattern that continues to drive prices beyond the reach of the local middle class. Those who can't afford homes are paying the price through rising rents, Capece said. 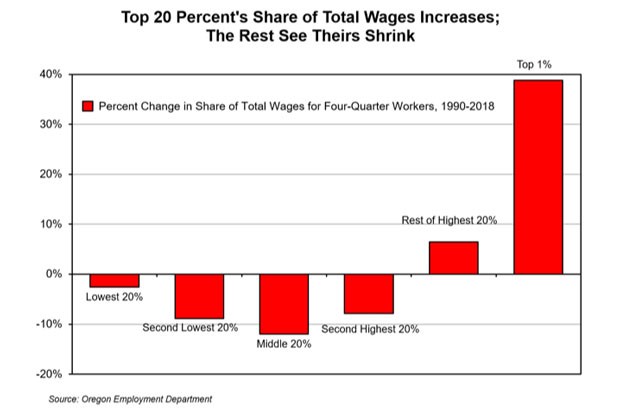 There are dozens of interconnected reasons that inequality is on the rise, but here are Piketty's top hypotheses:

-Blue-collar, middle-class jobs have moved overseas or have been automated

-The buying power of the minimum wage has decreased

-Skyrocketing costs of healthcare and education

-Union membership has dropped by more than a half, combined with weaker labor protections

-Tech giants like Google, Amazon and Apple concentrate prosperity in places where they're located

-Antimonopoly policy degraded beginning in the 1970s, contributing to the rise of Walmart and Amazon

According to Piketty, wealth inequality in the U.S. follows a chronological U shape, peaking in 1930, dropping to historic lows in the '50s and '60s, and then reaching the heights of the Roaring '20s again today. He writes that inequality declined in the mid 20th Century because of the redistribution policies of President Franklin Roosevelt, the high tax rates on the wealthy (up to 70%) and the strength of the labor movement.

The tides began to shift when President Ronald Reagan brought in a new era of anti-tax legislation that benefited the wealthy in the 1980s, nicknamed "trickledown economics." In 1999, President Bill Clinton deregulated the stock market and allowed some investment banks and savings banks to join together, something outlawed since the Great Depression. This essentially meant banks were again allowed to make risky investments with people's savings. Some economists would argue that this is what lead to the Great Recession and the government bailout of banks that had "gambled" with their customer's savings.

Because most middle-class Americans accumulate wealth through home ownership, the recession robbed millions of their only source of equity, further exacerbating the wealth gap.

Another popular hypothesis for inequality is shifting labor markets: In the 1970s, services began to replace manufacturing as factory jobs went overseas, which reduced opportunities for the blue-collar middle class, and pushed profits towards finance, insurance and real estate. Today's tech sector offers greater opportunity for those with education and skills, while jobs in fast food, retail and online shipping are low-skill, low-wage jobs.

The stock market provides another place to start in the search to find the root causes of inequality. Only 10% of the population owns 84% of the stock market, according to The New York Times. As housing, health care and other costs of living increase, middle- and working-class Americans have less left to invest in their futures, and therefore have little to gain from stock market growth. Gross Domestic Product growth, often touted as "good news" which leads to job growth and wage gains, may no longer translate into positive outcomes for working Americans. According to Fortune, this is because companies are getting better returns by using their profits to buy back their own stocks or invest in labor-saving technology, instead of hiring more workers or raising their wages.

President Donald Trump's 2017 Tax Cuts and Jobs Act continued the pattern of inequality by cutting the corporate tax rate from 35% to 21%. It made it easier for American and multinational corporations to avoid paying their share of taxes and it gives the top 20% a 2.9% tax cut, according to Bloomberg.

Piketty's protégé, Gabriel Zucman, is another French economist who now works at the University of California at Berkley. He estimates that the richest people in the world are storing $7.6 trillion in offshore accounts, hiding 80% of it from governments, resulting in $200 billion in lost tax revenue per year, according to his book "The Hidden Wealth of Nations."

Mansion Tax – The City of Bend could tax an additional 1% or more on homes worth over $1 million. This has been proposed in cities around the country, many of which are up against similar state-wide restraints like Oregon. Measure 5 (passed in 1990) capped property taxes at 1.5%. It would take state-level legislation to allow cities to levy a mansion tax, but it could help raise funds for road repairs and workforce housing, for example. There are currently no states that do this, but many have a transfer tax paid when a home is sold. In Washington State, as of January, this tax is progressively higher for homes worth more than $500,000, according to the Center on Budget and Policy Priorities.

Raise the Minimum Wage – Deschutes County's minimum wage increased to $11.25 in July and will reach $13.50 by 2022, due to the passage of Oregon Senate Bill 1532. Federal minimum wage has been $7.25 since 2009. Seattle, Petaluma, California and New York state have raised the minimum wage to $15 (with exceptions for small business). Inequality.org estimates that if minimum wage kept pace with GDP and overall wage gains, it would be $21/hour.

With the 2020 presidential elections approaching, candidates such as Massachusetts Senator Elizabeth Warren and Vermont Senator Bernie Sanders are running on platforms that include a wealth tax and higher income taxes for the super rich. Meanwhile, the Cato Institute, a libertarian think tank funded by the Koch brothers, among others, argues that wealth distribution is not the answer because just because some people are making more, doesn't mean other people are making less. Instead there is just more money in the economy. Wealth distribution will reduce incentives to innovate, according to a number of studies on Cato.org.

Anand Giridharadas, journalist for The New York Times, and author of "Winners Take All: The Elite Charade of Changing the World," wrote that the election of Trump was largely a response to the civil unrest of the working class that he believes have been left behind, even as GDP and the stock market continues to grow, and unemployment is at an all-time low.

"A successful society is a progress machine," Giridharadas wrote. "It takes in the raw material of innovations and produces broad human advancement. America's machine is broken. When the fruits of change have fallen on the United States in recent decades, the very fortunate have basketed almost all of them."