Commentary: On Powder and Polka | Outside Features | Bend | The Source Weekly - Bend, Oregon

Commentary: On Powder and Polka

With thousands on Century every day, what Central Oregon really needs is a ski train

The email could not have been more exciting if Ullr had typed it himself. "It's Official..." screamed the subject line. "We're Opening!" It was Nov. 27, and just like that the ski season was on.

So, too, began one of the more frustrating aspects of having upward of 4,300 acres of powder-choked glades, bowls and groomers right outside our craftsman doors: dealing with the crush of Mt. Bachelor-bound traffic. The stop-and-go madness can start within whiffing distance of the Flaming Chicken roundabout on 14th and Galveston and creep along for 20 miles. Invariably, some joker in a 30-cylinder truck will try to pass everyone to save a few seconds. Sometimes folks just give up and turn around before they even get out of town. I've done that. Twice. 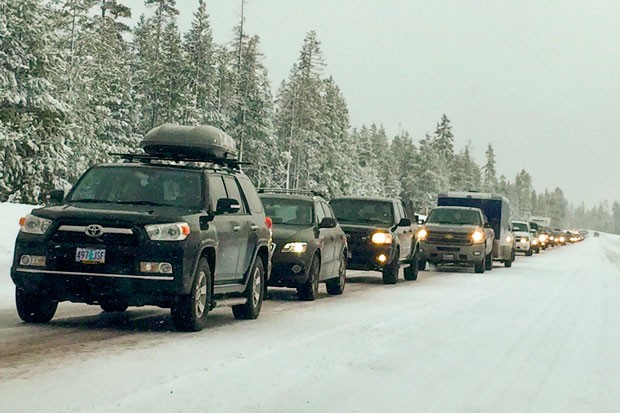 Mt. Bachelor has room for around 4,000 cars. The Oregon Department of Transportation estimates on a busy day, about 6,200 cars use the westbound lane of the Cascade Lakes Highway alone. Fully aware of the issue, Mt. Bachelor has pleaded with would-be visitors to carpool. Drivers with four or more people in their rigs get premium parking spots. This year the resort announced Red Chair would open early for season pass holders, wagering an ingenious bet that the lure of exclusive fresh tracks would help spread out the traffic.

The Cascades East Transit Mt. Bachelor shuttle removes about 45,000 vehicles from the road each year—many of which would be driven by employees—but these are all just patches that dance around the problem. You know what we really need? We need to turn the lowly commute into an irresistibly epic, unique experience that perfectly complements the awesome skiing we're so lucky to have. The answer to all of our problems is a ski train.

Picture it: It's a frosty Saturday in January and Central Oregon wheezes under a foot of crystalline pow. There at the platforms near The Pavilion you gather with merry townsfolk giddily awaiting the arrival of the 7:28 a.m. Powder Express. The train glides silently into the station, warm and sleek and emission-free. We load up. There's Mary! And Bob! And that quiet guy from chemistry!

We store our boards, take our seats and let the forest fly by. The conductor checks tickets. He's wearing jingle bells. A cart comes by with hot chocolate and Ocean Rolls. We stop at Virginia Meissner, Wanoga and Swampy sno-parks. We pause at Dutchman for the backcountry crews. Twenty minutes after leaving Bend, the train hisses to a stop at Bachelor, where we're booted up and ready to ride. On the way home, a polka band rocks the dance car. The beer car is packed. People would look forward to going up to Bachelor for the ride alone.

We need to find ways to connect Mt. Bachelor’s lifts to Bend’s roads in a manner that isn’t just safe and convenient but crazy fun, too. tweet this

It's a nice thought, eh? The reality is harsh. A Bend-area transit-expert friend estimated a train between Bend, Bachelor and Sunriver would cost about $10 billion just to build, which is enough to fund our regional tri-county public transportation system as it stands today for about six centuries—literally. Then there are the costs of maintaining a ski train, running a ski train, staffing a ski train and fixing it. There'd be permits and impact studies and a summertime train, too. But where would the tracks even run with federal land squeezing the highway? We could shut the road down entirely to most private cars, but good luck telling Americans that. The right to drive is practically our Second-and-a-Half Amendment.

At the end of the day, trains aren't very dynamic, either. A bus can change its route to fit demand. A train can't. Even so, as far-fetched as it all sounds, a ski train is not an entirely wacky idea. These marvels already exist—and not just in Europe. Anchorage, Alaska, has one, and it really does have a polka band. Denver, Colorado, has a version, too, but it's more Amtrak than oompa.

And yet as Bend grows, we need to dream big. We need to find ways to connect Mt. Bachelor's lifts to Bend's roads in a manner that isn't just safe and convenient but crazy fun, too. The answer isn't to pave more and drive less, but to change the way we think about moving from A to B. If our great, great, great grandchildren are going to get a ski train, we need to start working now. In the meantime, queue up the polka and get in line.

—Tim Neville is a correspondent for Outside magazine and freelance writer whose work has been anthologized in Best American Sports Writing, Best American Travel Writing and Best Food Writing. He lives in the Orchard District.