A 90-foot crane pulled a 20,000-pound generating unit at the Newport Avenue Dam on Mirror Pond last week. Data from the Energy Infrastructure Council show power output at the dam reached its lowest point in decades in 2020, producing just 315 megawatt hours compared to an average of 2,390 MWh over the past 20 years.

"The Newport Dam has been operating for over 100 years and is currently going through a rehabilitation phase. Over the past few years we've been refurbishing and making repairs to ensure its long-term viability as a generation resource for our customers," said Drew Hanson, a spokesperson for Pacific Power, in an email. "As a result, the plant has produced over 600 MWh over summer 2021." 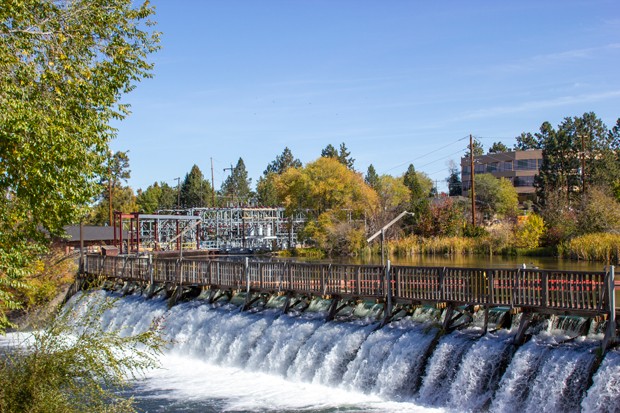 Two of the dam's three turbines have been maintained in the past several years, and the newest round of maintenance will refurbish the third as well as replace bulkheads and gates, exchanging the existing transformer and a ground grid replacement at the switchyard.

"This allows engineers and crews to refurbish parts on the turbine and perform overall maintenance. The other two turbines were refurbished over the past few years so this is the last one to be completed," Hanson said. "Along with refurbishments, upgrades have been made, that allow for improved reliability and match the 100-year-old plant with new technology to continue to bring value to customers."

Power output at the plant will still vary with the flow of the river, but at 600 MWh at the end of summer, 2021 will be closer to a typical output than during 2020. The upgrades increase the longevity of the dam and could potentially bring the dam closer to its maximum output of 405 MWh a year. 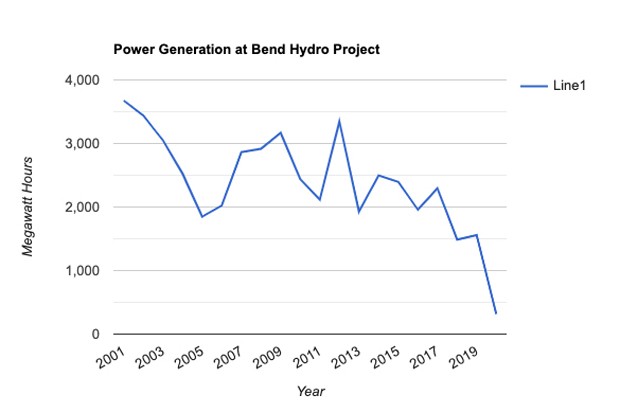 "The Newport Dam's rated max capacity is producing 1.11 megawatt of electricity," Hanson said. "These refurbishing and upgrade projects ensures the hydro facility will continue to efficiently produce clean electricity for our customers."

The fate of the dam has been in flux over the years; in 2015, after much community input and initial excitement about a change for the dam and Mirror Pond, PacifiCorp reversed its earlier plan to sell the dam and announced its plans to keep it in place so as to continue to generate power for the surrounding homes. Meanwhile, the private citizens who own the land under the adjacent Mirror Pond still hope to garner public funds to dredge the pond and remove the silt accumulated in the Deschutes River upstream of the dam. Officials from Bend Park and Recreation District and the City of Bend, along with others, have put any possible plans for dredging on hold while they explore options for adding a fish passage to Newport Dam.

Related More Bread Crumbs for a Solution on Mirror Pond: The general public continues to be asked to hold out hope that there is a resolution at the end of this red-tape tunnel