December 12, 2018
4 comments
Leaders in Bend are looking at a new way to fund the dredging of Mirror Pond: Increasing franchise fees for the utility that owns Newport Dam. The proposal, which became more of a reality following last week’s meetings with PacifiCorp—which owns Pacific Power—would see the City of Bend contributing $300,000 to dredging, with Bend Park and Recreation District and PacificCorp Foundation contributing equal amounts. 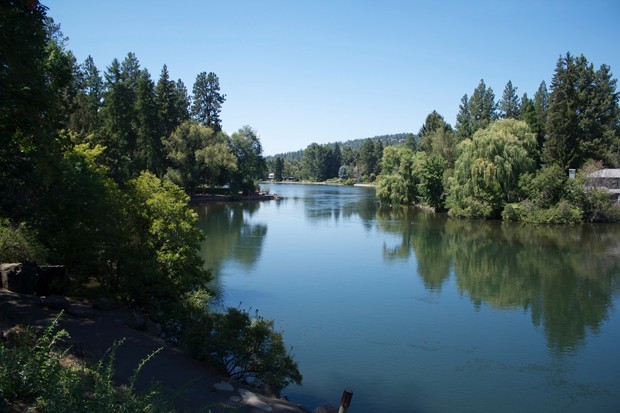 A representative for Mirror Pond Solutions—the entity that owns the land under Mirror Pond—said Tuesday the group had raised $320,000 in private pledges, leaving about $5.5 million of the projected $6.7 million project cost unfunded. Under the new proposal, the City of Bend would increase franchise fees issued to Pacific Power, which owns the dam that forms the impoundment creating Mirror Pond, to fund the rest. Those additional funds would be added to the City’s general fund—but reportedly cannot legally be earmarked for dredging.

Utility companies operating in Bend pay a franchise fee to the City, with Pacific Power currently paying a 5-percent franchise fee, gleaned from the rates it charges customers. It’s not yet clear how much more Pacific Power customers would pay under the franchise fee increase, though according to PacifiCorp spokesperson Tom Gauntt, “We are required to pass that fee onto customer(s) who live within the city limits of Bend and it is itemized on customer bills.”

The new funding strategy is a departure from the proposal brought forth by MPS earlier this year. During a May meeting with the Source Weekly, representatives of MPS proposed having the City pay around $1 million, with BPRD kicking in more than $2 million. MPS told the Source they’d secured permits from the Army Corps of Engineers and others to proceed with dredging, which they say has been building up sediment since it was last dredged in 1984.

At least one city leader wants the notion of franchise fee increases to take a more holistic approach, and for the City to look at all ways a prospective increase could be used.

“The City of Bend is on a really constrained budget, and that’s all the more reason for us to look at this once-every-20-year opportunity. For heaven’s sake, we should have all of these things all up there for us to judge and say, ‘this is the most important thing’ and this is the second-most important thing,’” said City Councilor Barb Campbell. “I just want Mirror Pond up there with everything else, comparing apples as closely as we can.”

On the issue of Mirror Pond, Bendites tend to fall into one of three camps: Those who see it as an “iconic” feature that must be dredged to preserve its history; those who favor leaving the river to its own devices and for silt to build up in the most “natural” fashion possible behind a dam, and those who favor removing the dam and allowing the river to flow in its natural state. That last option, following PacifiCorp’s 2016 decision to retain the dam instead of selling it, is off the table for now.

There’s also a fourth philosophical camp: Those who want the process to attain some type of public consensus, and for the process around deciding to dredge—or not—to be as transparent as possible. This summer, local activist Foster Fell emerged as a strong advocate for transparency. When meetings with city and parks officials around Mirror Pond were held privately and without public meeting notices, Fell aimed to file suit against the City. Fell dropped that suit in August after hearing that Bend Mayor Casey Roats had been suffering a health crisis.

An Advocate for Fish Passage

BPRD board member Nathan Hovekamp is one who believes the public has yet to come to a consensus on dredging. Hovekamp acknowledges that BPRD conducted a community survey polling people about their thoughts on an overall vision for Mirror Pond—but that was before Pacific Power’s 2016 announcement it would retain the dam.

“It’s one level of outrage piled on another level of outrage, argued and discussed ad infinitum about the future of Mirror Pond and all of that, but the funding question is relatively new—at least the current configuration of funding is still new—and I think it’s clear there has not been a robust public involvement process,” Hovekamp said.

Hovekamp is also an advocate of adding provisions for a fish passage on Newport Dam to the discussion around dredging.

“This is a tremendous opportunity to talk about doing something that promotes a healthier more functional river,” he said, suggesting monies be set aside as a mitigation fund. “I’m not trying to be an obstructionist,” he said, “but let’s have this other discussion.”

BPRD Board Chair Brady Fuller disagrees, saying the board’s position is that there’s already enough consensus to dredge, pointing to the “process by which the preferred alternative vision developed, and the resolutions passed by BPRD board and (the Bend City) Council inform our support for dredging,” he stated in an email.

Before any proposal for dredging can move forward, the Bend City Council will need to vote on whether to increase franchise fees to Pacific Power—and then to decide whether they’ll reserve at least part of that increase in funds for dredging. After January, the council will include new councilor Gena Goodman-Campbell, who, during the election, said she opposed using public funds to dredge Mirror Pond. Goodman-Campbell told the Source Tuesday she’d be in favor of increasing franchise fees to pay for other projects, but said: “I remain opposed to spending any public funds on dredging Mirror Pond, and we should be clear that this is what this proposal is.”

Incoming Bend Mayor Sally Russell indicated support of the new dredging funding proposal. “For the first time in 10 years, the community has found a way to dredge Mirror Pond, reducing the large silt buildup, and rebuilding the pond edges, and there is a significant amount of funding pledged as well,” Russell wrote in an email to the Source Monday. “Honestly, it’s about time this work was done.”

The next step in moving the project forward: developing a contract between the City, BPRD, Pacific Power and MPS. Fuller of BPRD said it would be appropriate to “continue discussions and support planning for fish passage at the dam” during contract negotiations. Those negotiations would also include opportunities for public notice and input.