After years of drought, Central Oregon is at a tipping point

The last two years represents the third-driest two-year period in the state's history, mostly driven by Central and Southern Oregon that've experienced the driest period in recorded history. Seven Oregon counties, including Deschutes and Crook, experienced worse drought than ever, and surrounding counties are much drier than usual.

With two years straining reservoirs and with many people reporting wells running dry, the outlook for next year is not good. Usually wet years give a chance for more moisture to fill in reservoirs and aquifers, but without that the probable drought this upcoming year is expected to be worse than the region has ever seen.

"We usually will require a couple years of normal or slightly above normal precipitation to recover all those water deficits that we accrued," said Larry O'Neill, the Oregon State climatologist associate professor in the College of Earth, Ocean, and Atmospheric Sciences at Oregon State University. "The drought from last year really likely was not going to recover with just one year. So even if we had a good year, good winter, this year, it probably wouldn't have fully recovered."

As of March 1 all areas of Deschutes County were experiencing some form of drought, with the southeastern portion of the county in the most severe classification, D4, meaning exceptional drought. To qualify as D4 it must be among the driest 2% of years on record, and D3 (extreme drought) is among the driest 5% of years.

"The data we use to base that off of is precipitation, estimates of evaporation and then the streamflow numbers, too. Other kinds of data that are based off of those primary data sources, like soil moisture content, so the amount of soil water that's been stored in the soil, you know, and that can depend on kind of what cell type you have, and kind of the character of the precipitation you did receive," O'Neill said. 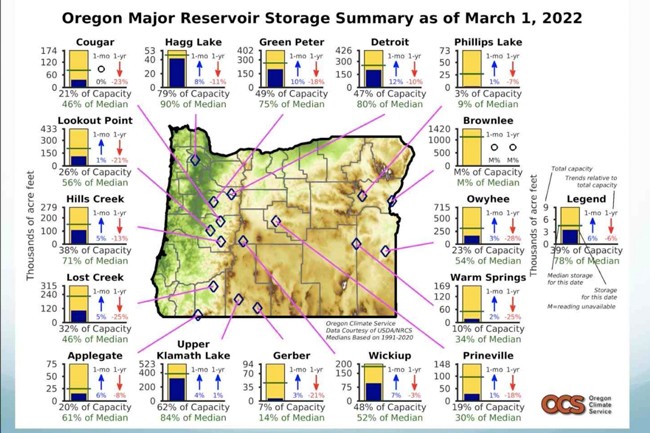 There's been plenty of drought years over the last two decades, and O'Neill believes at this point a lot of people tune out of drought news.

"I think people are starting to feel drought fatigue a little bit like you every year, but we just wanted to get the word out that without a miracle rainstorm, or multiple miracle rainstorms, this will be really kind of an extraordinary year, in terms of the impacts," O'Neill said.

Those impacts can be severe. Some wells are already running dry, or pumping up lower quality water. Low reservoirs may keep people from recreational opportunities. Agricultural products may be undersupplied, which can cause an increase in the price of commodities like hay, which translates to higher beef prices. Hydroelectric power generation dwindles with reservoir levels. Fish habitats become inhospitable. Grasshoppers, thriving in a dry climate, eat up more crops. And, of course, wildfires have a greater chance to spread with the dry fuels lying on the ground.

I think people get are starting to feel drought fatigue a little bit like you every year, but we just wanted to get the word out that without a miracle rainstorm, or multiple miracle rainstorms, this will be really kind of an extraordinary year, in terms of the impacts.”—Larry O’Neill tweet this

"The combination of low winter precipitation and early snow melts will give us an early start to the fire season. So we'll be vulnerable to things like big east wind events," O'Neill said. "Looking forward to things like Fourth of July, we might see a lot more concern with firework bans, an early finish to field burning season and things like campfire bans. Those are all seen as maybe a little bit of a nuisance, but you know, it is important for various people, so those are direct impacts that we can expect."

The Predictive Services of the National Interagency Fire Center reported on March 1 that Central Oregon will have a near-normal amount of fire risk in March and April, but by May there will be significantly more potential for fires due to escaped ignitions on dry and windy days.

Patrons of Central Oregon irrigation districts can expect shorter irrigation seasons and potentially altered schedules. Tumalo Irrigation District is scheduling patrons on a one-week-on, one-week-off, or one-week-on, two-weeks-off, schedule, depending on the time of year. Arnold Irrigation District projects its irrigation season will finish at the end of June or early July; last year it went until the end of July. North Unit Irrigation, the most junior water right in the Deschutes Basin, is bracing for another tough year considering it relies on Wickiup Reservoir, which is currently at 48% of its capacity in a reservoir which is typically near-full at this time of year.