PRC at the Pump | The Source Weekly - Bend, Oregon

PRC at the Pump

Filling up the tank could put dollars toward local "pregnancy resource centers," the organizations facing renewed scrutiny after the repeal of Roe v. Wade

Starting in August and ending in October, Shell USA is donating a portion of its gas sales at specially marked pumps toward children's charities selected by the franchise owners. In Bend, four stations are participating in the Giving Pump program, one being the Stop and Go station on the intersection of Highway 20 and 27th Street. From that location, money will go to the Pregnancy Resource Centers of Central Oregon.

"I think we get a bad rap often with people thinking that we're trying to coerce women to keep their babies, and in my opinion, and I've been here for seven years now, it's really not the truth," said Leanne Woods, executive director of Pregnancy Resource Centers of Central Oregon. "We care about the women that are in our centers, and we're going to tell you, whether you have an abortion or are having your baby, that we care about you."

Woods said PRCCO saw about 3,000 clients last year in its clinics in Bend, Redmond and Prineville, and about 70% continue interacting with the program in some capacity. The centers offer a free food pantry, free prenatal vitamins, free clothing for children up to two years old, parenting coaching classes, diapers, formula, car seats and ultrasounds.

"I always think, why not come somewhere free that is going to answer some of your questions, especially when it's your first pregnancy," Woods said. "A lot of our girls are on what we call just that tipping point of poverty where a baby could allow them to tip over into a whole different situation in life."

The free programs can connect women to vital resources during and after pregnancy, but criticisms of pregnancy resource centers are more pointed toward attempts to sway women away from abortion.

"My expectation for 'options counseling' was, I was going to meet with professionals trained in their field; I am under the impression it would probably be a therapist of some kind," said a woman who was unhappy with her consultation at the PRCCO in Bend and who asked to remain anonymous.

She sought options counseling soon after finding out she was pregnant, and PRCCO was the first result when doing an online search for where she could go. She said she turned down several offers to perform pregnancy tests and ultrasounds—she'd already confirmed her own pregnancy and had an ultrasound scheduling, insisting she just wanted options counseling. Her session, however, was far from what she was looking for.

“I don't have an issue with what the pregnancy resources centers are doing. You want to provide women with support and resources to make their entrance or continued entrance into motherhood easier, fantastic. No one's going to say don't provide resources, I have a huge issue with a lack of transparency on what it is that they're doing, like, where are their values?” tweet this

"Within about five minutes, she tells us that she's pro-life. How is this happening? This is not options counseling if she's coming straight out and telling me her bias," she said. "She asked to pray for us. We said yes, because we believe that anyone can do whatever they want for their own religion, but we did not realize she was going to pray for us right then and there—super uncomfortable."

Beyond the prayer and bias, the woman took issue with the use of the word "baby" rather than embryo or fetus. Overall, she felt the organization could've been more upfront about its stances. Its website states it doesn't refer for abortions or abortifacients, but only in small print at the bottom of the webpage and in a blurb on its page detailing free services available. Central Oregon for Life, the political wing of the PRCCO, states it doesn't refer for abortions more prominently and more often on its website.

"I don't have an issue with what the pregnancy resources centers are doing. You want to provide women with support and resources to make their entrance or continued entrance into motherhood easier, fantastic. No one's going to say don't provide resources, I have a huge issue with a lack of transparency on what it is that they're doing, like, where are their values?" she said. 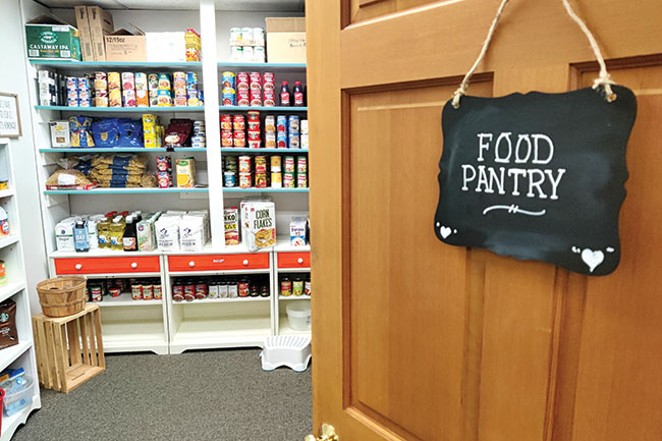 Woods said she's heartbroken learning about bad experiences at the clinic, but believes more clients leave the clinic satisfied than not. She also said the organization is upfront about its values and that they seek to match the energy of the mother, referring to embryos and fetuses as babies if their client does and praying with their clients with permission.

"We are a faith-based nonprofit organization," Woods said. "We believe 100% in the power of a prayer. Do we talk to girls about those things? Yes, if they want us to. But we're never forcing religion down a girl's throat. When we talk with them we'll say, 'Where are you spiritually?' Because we believe that pregnancy is physical, emotional and spiritual."

The partnership with Shell is just one of several ways the PRCCO raises funds. It relies almost entirely on donations from individual contributors and businesses. Its largest annual fundraiser will take place on Sept. 30 and it collects thousands of bottles during its bottle drive and proceeds from recycled materials at the BottleDrop Recycling facility. Shell declined to answer pre-written questions for this story, including the percentage of proceeds donated to charity. The pumps are marked with purple signs indicating they contribute to local children's charities but don't specify specific nonprofits.