Get to the choppah! 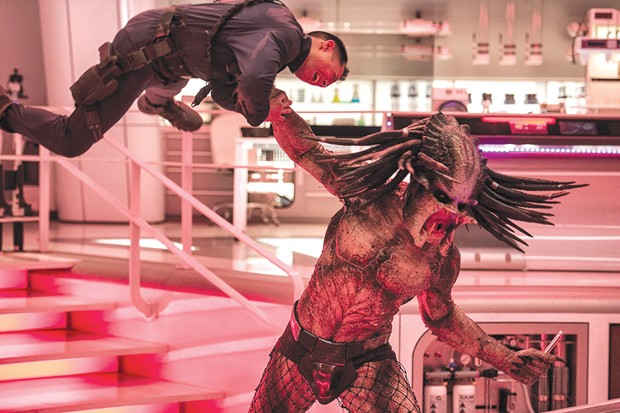 Shane Black is a genius—but you would never know it from watching his reboot of "The Predator." This is the guy who wrote "Lethal Weapon," "The Monster Squad" and "The Last Boy Scout" while still being fairly new to the movie business. Since 2005, he's been on a creative hot streak as a director with "Kiss Kiss Bang Bang," the genre-defying "Iron Man 3" and the criminally underseen "The Nice Guys," without showing any signs of creative fatigue.

One of the reasons I was so unreasonably excited for "The Predator" is because Black is the co-writer/director. He always creates iconic dialogue and memorable characters, but his real brilliance lies in taking well-worn genre tropes and deconstructing them to the point of re-invention.

He jumpstarted the buddy cop genre with "Lethal Weapon" and "The Last Boy Scout," and he took the "Iron Man" franchise and made a superhero film where the hero is suffering from PTSD and doesn't even want to set foot in his armor. So when his name came up as the creative force behind the "Predator" reboot, I expected him to take the soldiers versus an extra-terrestrial murder machine franchise into some unexpected territory.

But once again, Shane Black defies all expectations by making a straightforward genre movie that feels like what his version of "Predator 2" would have been if it came out in 1990. "The Predator" feels like a Cannon Films schlockbuster along the lines of Chuck Norris' "Delta Force" or Dolph Lundgren's "Masters of the Universe." There's no irony in Black's script, only macho dudes spouting one liners and putting cigarettes out on their tongues.

The film itself is a thrill ride featuring callbacks to the earlier "Predator" films, while building a larger mythology for the series focused on climate change, friendly predators and noble sacrifices of the American soldier. Olivia Munn is a badass as the scientist sent in to study the predator, but she mostly runs, jumps and dives from explosions while firing automatic weapons.

A few months ago, due to poor test screenings, the entire third act of the film was reshot. You can almost hear Black gritting his teeth through the final action sequences. Fox and Black battled over the tone of the movie, retroactively de-fanging all the things that made it a Shane Black movie. In the theatrical version of the film we have Asperger's being treated like a superpower, non-sensical character relationships popping up out of nowhere and the blatant setup of a sequel—so much so that the movie doesn't have an ending.

Right after a frenetic and impossible-to-follow action sequence, the movie just ends with a wink and a nod, barely able to suppress its desire to yell "COME BACK SUMMER OF 2020 TO SEE HOW IT ALL ENDS, IDIOTS!!"

All of this is to say that while "The Predator" is extremely entertaining and a blast to watch from beginning to end, it's also kind of a piece of crap. I don't think much of the blame falls on Shane Black, since it's still very easy to spot the good movie hidden inside the reshoots—but hopefully the film does well enough that next time we can finally see Black's real vision for the film, unhampered by studio suits pretending to be creative.