Prepping for the Big One | Local News | Bend | The Source Weekly - Bend, Oregon

Prepping for the Big One 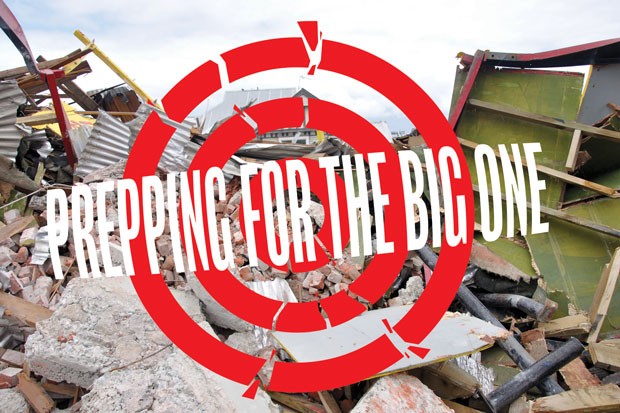 Friday the 13th is supposed to be spooky, so maybe it was fate that on that day, the Oregon Office of Emergency Management held two training sessions for homeowners, builders and other professionals to learn about seismic retrofitting for detached, single-family, wood-framed dwellings—better known as houses—in case the Big One hits.

But let's back up. This isn't Lincoln City, or even Portland. The presenters weren't telling people to prepare to live for months without water or power. There weren't any horror stories, no comparisons to the 1906 quake in San Francisco that nearly burned the city to ashes.

This was a class taught by BJ Cure, owner of Beaverton's Cascadia Risk Solutions, a company that identifies and minimizes earthquake risk by explaining to people how they can seismically retrofit their homes, and what the greatest vulnerabilities are.

Cure said a lack of anchors, weak cripple walls, split-entry homes, and post and pier foundations are the most common types of problems when talking about seismic retrofitting. In Bend, many houses in Old Bend and the Orchard District were built without anchors and weak cripple walls. What this means in non-builder speak: A concrete foundation is poured along the house's footprint. The framing is then placed atop, but not bolted to the concrete. The space under the house's floor is left open—commonly called a crawl space—where you can access plumbing or other utilities. Cripple walls are short wood stud walls that enclose the crawlspace under the first floor of the home. A weak cripple wall is one that doesn't have plywood attached to it, which reinforces the wall.

During the presentation, Cure showed photographs of houses that had cripple wall failure. They were often slumped over, as if that part of the house was made of warm butter.

"When the cripple wall fails, it's typically a total economic loss," Cure said. "So much utility damage is done, it's cheaper to tear it down."

But there's hope. Cure said you can hire a contractor or home inspector to go through the Federal Emergency Management Agency's P-50 assessment form. I own a 1974 ranch near Pilot Butte and have enough construction knowledge that with Cure's help, I did the assessment myself.

"When the cripple wall fails, it's typically a total economic loss," Cure said. "So much utility damage is done, it's cheaper to tear it down." —BJ Cure tweet this

The assessment works by deducting points based on faults in your home in the foundation, superstructure framing and configuration, general condition, nonstructural elements, age and size, local site conditions like the slope your home is on and the regional seismic hazard score. My home scored a B on the A to D scale, which means it's a good performer, but seismic retrofits are encouraged. The biggest problems were the lack of anchored framing and the weak cripple wall. Both cost the house about 20 points. The house's regional seismic hazard score was 39 percent. By contrast, homes in Pacific City, for example, are above 80 percent. FEMA recommends homes that score a D on the scale have significant seismic retrofitting done before people reoccupy the home.

Why all the fuss? Well, we live near the Cascadia Subduction Zone, a 600-mile "megathrust" fault that runs from Northern Vancouver Island to Cape Mendocino, Calif., about 70 to 100 miles off the coastline, according to the Pacific Northwest Seismic Network. There are also faults that run through and near Bend. Though many of them are about 750,000 years old, they're still there.

Great Subduction Zone earthquakes are the only ones in the world that can produce quakes greater than 8.5 magnitude, according to PNWSN.

The last known megathrust earthquake was in January 1700, according to OOEM. The pressure building up where the Juan de Fuca Plate is subsiding underneath the North American Plate has scientists predicting there is a 40 percent chance a 9.0-plus magnitude quake will occur in the next 50 years.