The Aug. 28 shooting at a Bend Safeway was the 528th mass shooting in the United States in 2022, according to data website MassShootingTracker, which defines any incident of four or more people shot to its list of attacks. The list, as of press time on Sept. 5, is at 544 — an average of 2.18 shootings a day with 605 people killed and over 2,200 wounded.

The tracker strips ideological, motivations and casualty requirements, ending up with a much less conservative account of mass shootings. The Rockefeller Institute of Government reports 402 mass shootings between 1966-2020 — defining mass shootings as targeted violence at one or two locations and excludes gang violence, targeted militancy and terroristic activity. The "typical" hallmarks of a mass shooter is well known in the U.S. — someone who is isolated and experienced childhood trauma and bullying. 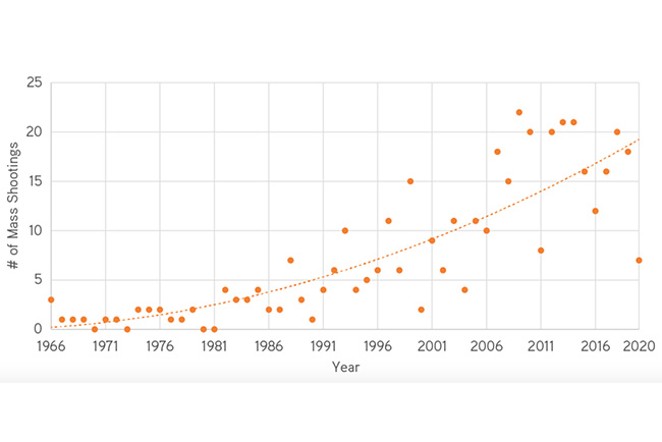 "Overwhelmingly the research says that that anger starts with early trauma. That trauma is typically violence in the home or—so often with school shooters, they are victims of sustained severe bullying. If that trauma goes unrecognized and untreated, it festers, causing depression, despair, hopelessness and a desire for control and revenge," wrote Lezlie Neusteter, a Sisters-based researcher and founder of Prevent Mass Shootings Now, in a statement.

Using just the similarities to identify mass shooters is largely discouraged among researchers. There are many people who own guns, suffer from mental illness and are bullied who don't commit mass shootings.

"The more time you spend trying to profile against these things, number one, you're going to completely miss the needle in the haystack you're trying to wade through, but number two, in doing so you're basically criminalizing a haystack," said Dr. Jaclyn Schildkraut, an associate professor of criminal justice at the State University of New York at Oswego and executive director of the Regional Gun Violence Research Consortium at the Rockefeller Institute of Government.

An alternative to profiling is threat assessment, which focuses more on pre-attack disturbing behaviors. Schildkraut says one of the most overt warning signs is leakage, when shooters either directly say their plans or hint at them. Though shooters are thought of as isolated, there are often warning signs expressed to people near them, or through an online presence.

"They tell pretty much anybody who will listen what they're about to do. And in that respect, the number-one way that we can help to prevent these charges is from educating the public about what leakage looks like, helping to break down the bystander effect that we often see, which is where people have information and don't come forward for one reason or another, and then providing them the mechanisms or outlets to do so like a community based anonymous tip line," Schildkraut said.

The gunman in Bend posted a manifesto just before committing the attack, but had uploaded videos shooting an AR-15 and shotgun in China Hat in the weeks approaching the shooting. A former classmate of the shooter told the Associated Press that the gunman threatened to shoot him. Researchers say it's rare that no indication is given of what's being attempted.

"People do that for a reason, they communicate. We're a species that communicates. And so this will all come out in the investigation. When people say, 'He was a loner,' or, 'Nobody knew him,' and then three days later, when the investigation starts to percolate, we find out, somebody did, and they didn't pick up the phone," said Joel Dvoskin, a forensic psychologist who's evaluated mass shooters.

Mass shootings can tend to cluster, and it's believed among researchers that there's some contagion. The frequency of mass shootings has risen since they were first studied. Between 1966-1975 there were 12 mass shootings, according to the Rockefeller Institute of Government, and between 2011-2020 there were 160. A turning point for how we understand mass shootings is Columbine, which made the shooters household news over several days of nonstop news coverage.

"I think Columbine changed the way that our country understands mass shootings, because of the fact that it was the first time we pretty much ever watched it play out live on national television, the way that we're very accustomed to now," Schildkraut said. "A result of that is it basically glamorized and glorified those two perpetrators because it got so much attention, the likes of which had never been seen before."

“Nobody knows for sure why it's so much worse in America. But some of it is, it's like a bad habit.”—Joel Dvoskin tweet this

Schildkraut recommends a no-notoriety protocol that elevates survivors, victims and heroes from a mass casualty event, rather than indulging the attention-seeking behavior of perpetrators by naming them. Mass shootings are becoming more of a distinctly U.S. issue, accounting for 73% of 139 incidents in developed countries between 1998-2019, according to a study in the International Journal of Comparative and Applied Criminal Justice. Researchers are wary to tie this to a single issue, but say ease of access to guns, reactionary politics and a precedent of similar attacks contribute to it.

"Nobody knows for sure why it's so much worse in America. But some of it is, it's like a bad habit. That we've had so many of them, that it's right in everybody's face if I get angry and decide that my life isn't worth living, I'm going to take a couple people with me. And here's how I do it now to make me famous. That's one reason it's American, our tradition of glorifying people who do this stuff," Dvoskin said.

In Deschutes County crisis counselors are available at the Stabilization Center at 63311 Jamison Street in Bend, or through its 24-hour crisis line at 541-322-7500 ext. 9.