In the aftermath of the U.S. Immigration and Customs Enforcement standoff with hundreds of Bend protesters on Aug. 12, the Source dug into the local, state and federal laws which led to the arrest and detainment of two Bend men. 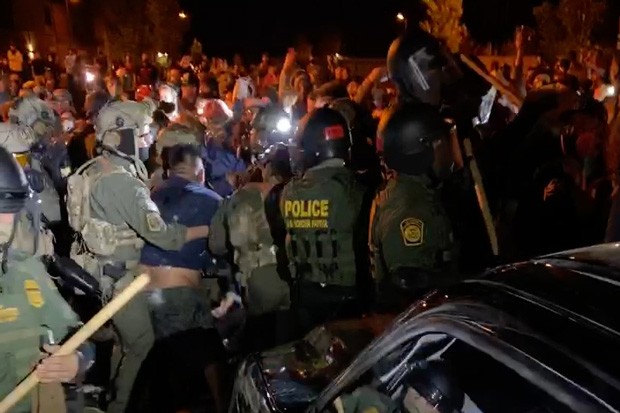 Deschutes County District Attorney John Hummel said the detainment was not an anomaly. "Not only is it not unusual, it's par for the course," Hummel said. "Since Bend became a city, I would guess immigration has been here 1,000 times to come and take people away."

Why did ICE choose to pick up these men?

According to county records obtained by the Source, Josue Arturo Cruz Sanchez pleaded guilty on Feb. 5, 2020, to criminal trespass in the first degree for an incident on Nov. 3, 2019, for entering another house in Bend, a Class A misdemeanor. He was placed on bench probation for one year and had to pay $100. He has two convictions of assault in the fourth degree (misdemeanor/domestic violence) and one conviction of coercion. He has an upcoming trial in January where he is pleading not guilty to another domestic violence charge.

In Oregon, when a foreign-born person is booked into jail, county officials note their national origin, which is then submitted to the statewide Law Enforcement Data Systems. This database is accessible to law enforcement at the local, state and federal level including to ICE.

How is immigration status determined?

Dan Larsson has been practicing immigration law in Bend for two decades and was the first immigration attorney on the scene Aug. 12. He explained that people who attempt to cross into the U.S. illegally often do so multiple times. Every time they are apprehended and processed by border patrol, their names, faces, fingerprints and other identifying information are collected. This can then be easily matched up with state conviction records.

Whether Oregon law enforcement agencies report immigration statuses in their statewide database is an important question. Legally, they are not allowed to assist ICE in any way, though Oregon Law Enforcement Data Systems provides at least some information ICE can use to determine immigration status.

Larsson speculated that in the era of Big Data, even without country-of-origin information directly connected to individuals, the federal government's sophisticated immigration status databases may make it fairly easy to comb Oregon's LEDS database, flag Latino names and see if they pop up as undocumented in DHS databases.

These kinds of events have been happening since the beginning of immigration law in the U.S. Not only is it not unusual, it’s par for the course. Since Bend became a city, I would guess immigration has been here 1,000 times to come and take people away—Deschutes County District Attorney John Hummel tweet this

What does sanctuary status mean?

According to America’s Voice, a national immigration reform nonprofit, a sanctuary city (or state in this case) means that government agencies and entities within the state limit their “cooperation with federal immigration enforcement agents in order to protect low-priority immigrants from deportation, while still turning over those who have committed serious crimes.”

It is illegal in Oregon for law enforcement agencies to arrest or detain a person with undocumented status just because they are here illegally. If they get caught driving without a license, for example (as Cruz Sanchez was once charged with, according to Central Oregon Daily), the person would be responsible for that offense only. They would also be entitled to due process. If ICE becomes aware of a person in Deschutes County Adult Jail who is undocumented and about to be released, the Sheriff's Office cannot hold the person for a few extra days to give ICE time to pick them up.

But federal law supersedes Oregon state law, which means federal agents can come pick up a person with undocumented status at any time.

"Anyone who is in the U.S. unlawfully is subject to removal regardless of whether they have committed a crime," Hummel said. "[United States] Congress has essentially abdicated responsibility from making a functional immigration system. Because there are massive numbers of people who are now in the U.S. with undocumented status, the federal government realizes it can't deport everyone, so they focus on people that have committed a criminal violation."

ICE was created in 2003 as part of the Department of Homeland Security after the 9/11 attacks. By the beginning of Barack Obama’s second term, immigration was one of the highest priorities for federal law enforcement and half of all federal prosecutions were immigration related, according to The Atlantic. The budget for immigration enforcement ballooned to $18 billion which allowed ICE to build a nationwide infrastructure of detention facilities, an international transportation system and monitoring technology. Many of these resources are outsourced to companies like GEO Group, the company runs the Tacoma Northwest Detention Center where Cruz Sanchez and Zeferino Rios were taken after they were transported out of Bend in unmarked ICE vehicles.

While President Trump has publicly declared a “zero-tolerance” policy for unlawful immigrants, in practice his administration has supported exceptions for immigrant farmworkers, according to The Washington Post. Trump also deported less people than Obama who sent home 1.18 million people in his first years of presidency to Trump’s 800,000 so far.


Back on the ground at the protest

Larsson, the Bend immigration lawyer, got to work Wednesday afternoon at the anti-ICE demonstration by getting in touch with all of his amicable ICE contacts, including one who was standing just a few yards from him when he called her.

"Everyone knew this was not going to end peacefully," Larsson said. "I knew the protesters weren't going to let the buses leave, and ICE was ordered not to let the men off the bus."

Innovation Law Lab filed a complaint against DHS claiming that by denying the men access to an attorney before they left Oregon, it violated their constitutional rights. The attorneys also argued that because they were unable to speak to the men on the buses, they could not file a request for their release in Oregon, which would have allowed these attorneys to better represent them. Judge Karin Immergut told DHS's attorney that the men must not be deported while their case is active, and set Sept. 3 as the date of their preliminary hearing.

As Larsson tried to broker a deal with the ICE agents on site, Hummel began working his way up the chain of command, circling back with Mayor Sally Russell and Police Chief Mike Krantz on email chains and phone calls with U.S. Department of Homeland Security officials.

Hummel tried to reason with ICE agents on site:

“I said, ‘I think you agree with me, you can’t take the bus and drive south to Tijuana [Mexico]. You know you have to bring them to an immigration judge and we all agree they have the right to due process. If you send in troops, you put these people at risk. How about instead you issue a citation for them [the detainees] to appear in immigration court, and then it is in the judge’s hands?'”

Hummel said his primary concern was the safety of everyone in the community.

"But [a peaceful resolution] wouldn't fit the narrative of sending in the troops to stand up to this blue jurisdiction, to use a show of force to stand up to the 'radical left,'" Hummel said.

"We got to the top of DHS," Hummel said. "They told us all decisions regarding the federal troops arriving on the scene came from Washington. It was either [U.S. Secretary of Homeland Security] Chad Wolf, [U.S. Attorney General] William Barr or [President Donald] Trump."

When the men do appear in court, both have the potential for immigration relief, according to Larsson— particularly Zeferino Rios, who has no criminal charges on his record. A number of factors could affect the court's decision on relief including:

• whether they have lived in the U.S. continuously for 10 years or more

• whether they have a spouse or children who are permanent residents

• whether these family members will suffer hardship without the men's incomes.

Larsson explained when ICE picked up the men on separate occasions on the morning of Aug. 12, the agents had an administrative warrant from ICE, not a federal judicial warrant. This means they could not legally take the men from their homes or work sites, which is likely why they approached them as they were driving to and from work.

"Most people don't know that if ICE agents show up at your door, it is OK to ask them to slide their warrant under the door," Larsson said. "If it's not a judicial warrant, then you don't have to go with them. But it's like when you get pulled over by a cop; it's scary and you get nervous and do what they say."