Last December Northwest Natural Water Company, a subsidiary of the state's oldest gas company, Northwest Natural, acquired an ownership stake in Avion Water, the state's largest private public utility. NW Natural delivers gas to over 600,000 residential customers in Oregon, which is about 80% of all natural gas deliveries in the state.

NW Natural got into the water utility business on December 21, 2017, when it acquired Salmon Valley based out of Welches, Oregon, and Falls Water in Idaho Falls, Idaho. The two privately owned public utilities had about 5,600 combined customers, and have since expanded across the Pacific Northwest, Arizona and Texas. 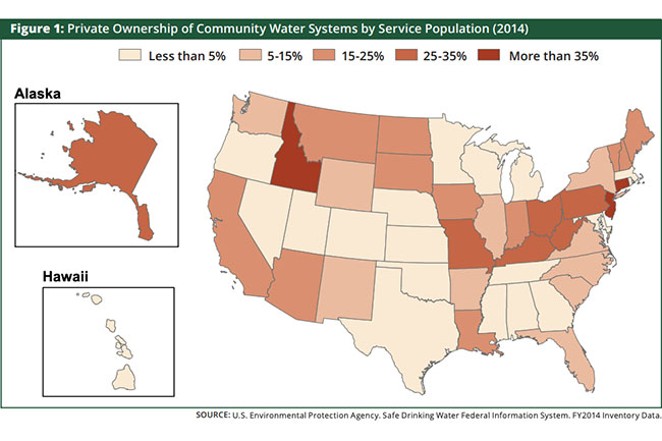 "The water utility sector is an excellent strategic fit for our company," stated David H. Anderson, president and chief executive officer of NW Natural in a press release after the acquisition.

NW Natural said the aspects of business it excels at, such as managing distribution infrastructure, customer service, working in a highly regulated market and environmental stewardship, are applicable to the water utility sector it entered. Anderson also noted that the 2017 purchase is part of a long-term plan to diversify its services. NW Natural believed Oregon's smaller water utilities could benefit from the resources it could bring as a large company. "The water sector is extremely fragmented, and many water systems suffer from lack of scale and a limited ability to invest in infrastructure. We knew we could bring that investment capacity, as well," said David Roy, spokesperson for NW Natural. "We can provide operational capacity. Some small utilities are operated by one person or a handful of people, and it's difficult for them to have the same level of operational expertise, training on water quality, water efficiency, and safety."

About 95% of Oregon's municipal water systems are government run, and Avion Water Systems in Bend is the state's largest privately owned public utility, with about 15,000 customer connections. Avion is regulated by the Oregon Public Utility Commission, a regulator that sets rates and establishes rules of operations for investor-owned utility companies.

Avion accounts for about half of Oregon's regulated private water customers, which in total includes about 32,000 customers. When NW Natural purchased Avion in December, it said the sale would support Avion's growth. Avion is set to provide water to a good portion of new developments in Bend.

"Given rapid population growth in Bend and Central Oregon, there is going to be a need for significant investments in water system infrastructure," Roy said. "We have a strategic investment in Avion and we are helping to fund growth-related infrastructure investment so that Avion can meet the needs of its customers in the region."

It's not NW Natural's first purchase in Central Oregon. In 2019 the Public Utility Commission approved its acquisition of Sunriver Water LLC, a company that provides water and wastewater utilities to 9,400 connections. Another private utility company, SouthWest Water Company out of California, also invested in Central Oregon when it purchased Cline Butte Water, the water utility serving Eagle Crest Resort.

Food and Water Watch, a nonprofit advocating for safe food, clean water and climate protection, found privately owned water systems charged 59% more than publicly-owned systems in a 2016 study. A year before it raised alarm over the lack of transparency in privately-owned water utilities.

"Almost all private water companies did not reply to requests for information about their number of shutoffs. Of the 11 privately owned water utilities surveyed, only 1 (Suez Idaho) responded — representing a 9 percent response rate. In comparison, the response rate among public sector providers was 93 percent," Food and Water Watch wrote in a study called America's Secret Water Crisis.

When the Source Weekly requested records of the top residential water users in Central Oregon, Avion sued to keep its largest water users confidential. That was after Deschutes District Attorney John Hummel ordered Avion to fulfill the request. Both Bend and Redmond's water departments complied with the records request in a timely manner. The Source Weekly is now represented by the Reporter's Committee for the Freedom of the Press in regard to Avion's suit.

The watchdog butted heads with NW Natural in March over a proposed 12% rate hike for natural gas services, less than a year after the Oregon Public Utility Commission approved a 13% rate increase. The 12% increase would contribute to $11 million in executive and employee bonuses, increase shareholder profits by $1.1 million and fund a 30% increase in NW Natural's advertising budget, according to Oregon CUB.

CUB also voiced concern over NW Natural, Avista and Cascade Natural Gas suing the state to avoid reducing greenhouse gas emissions as outlined in Oregon's Department of Environmental Quality's Climate Protection Program — which is designed to reduce emissions by 50% by 2035 and 90% by 2050.

"Gas utilities talk a good game about their commitment to reducing carbon emissions. But they continue to invest millions in expanding their pipelines and increasing their emissions every year," Jenks said in a press release on March 24. "This suit demonstrates the wide gulf between their rhetoric and their reality."

NW Natural denies that it acts any less transparently than a public utility, and points to the regulatory oversite it has to adhere to under state laws.

"Both our gas business and NW Natural Water are very transparent as regulated utilities. Regulatory oversight includes the rate-setting process overseen by the Oregon Public Utilities Commission," Roy said. "NW Natural as a publicly traded company is also subject to SEC filings and other mechanisms that require transparency."