Plastered to a sheer rock face, hundreds of feet above the ground, gripping tiny holds with her fingers and standing on dime-width edges, Jules Jimreivat surveys the current landscape, her only safety being a 9-millimeter-thick climbing rope connected to her waist harness, and her skill and mental toughness developed through years of climbing. Like a game of chess, her next move could prove pivotal to success or failure. As a professional rock climber, Jules Jimreivat has seen her fair share of unique problems to solve.

"Climbing has been a driving force in my life since I started climbing at the age of 7. I began competing in the youth series at both a national and international level," she said. Attending college in Salt Lake City, Utah, enabled her to acquire extensive experience climbing outdoors, and also cemented in her mind that climbing was a lifelong passion. "I believe pushing my personal limits outside is the greatest joy in climbing," said Jimreivat. 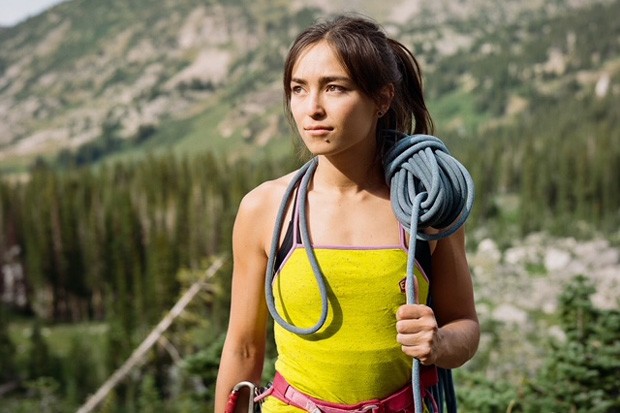 Cognitively, climbers are hard workers. Climbs are like puzzles, and puzzles can be impossibly difficult to solve. Many are scientifically minded, and Jimreivat, who has a degree in biology with a minor in chemistry, uses her background as a chemical analyst to both see the big picture and home in on specifics in order to solve equations. Her attention to detail and visual acuity are major contributors to her success. "I am a great on-sight climber. Great vision. Don't always flash it (complete on first attempt), but seeing the moves before I get there is a powerful tool. Right now, I work on more technically difficult routes, and may spend several hours a day working only a handful of moves. Eventually all the moves come together for a successful ascent."

Although her hardest route to date is 5.13b, when questioned on social media about whether completed a hard climb, Jules responded, "Send, not send, hard grade, easy grade...that's not the message I'm focused on spreading. I care about the moments that climbing brings me and the experiences. Trying hard and sending is part of that, but I leave it vague on purpose because that's not the ultimate goal or the reason that I climb."

That seems to be part of her overall philosophy.

"Traditionally, I have always avoided being overly neurotic or obsessive about things," she said. "Happiness is the key. Being in a good headspace is at least 50% of my success." Case in Point: Jimreivat took a year off recently, saying she wasn't happy, had difficulty completing projects and was suffering from multiple injuries.

"I took the time to recenter my mind and spirit, and when I came back to climbing, I was just as strong, but had a much better success rate. I didn't always have specific focus on routes, or how long it would take me to do a route. Now I take a more scientific approach, where I write out the moves, take better care of my body, and realize that if I'm not enjoying it—not having fun—I'm over it."

“Happiness is the key. Being in a good headspace is at least 50% of my success.”— Jules Jimreivat tweet this

As a relatively new resident to Bend, Jimreivat is excited to explore her first Central Oregon winter. "Historically, in winter I have been in Utah, where you can climb year around. Before that I was in Spain. I'm looking forward to climbing at Smith Rocks, because of the nice dry weather, fewer climbers at the crag, and the colder temps which are actually better for grip on your shoes."

To that, she adds, "I'm also going to ski more often. Even though I grew up a skier, I've lately become more (enamored) with it. I feel like I am on a better learning curve in skiing vs climbing. In climbing it's about small advances in strength and working out the gymnastic moves on a particular climb." With skiing, she said she's drawn to the flow of skiing movements, working with gravity instead of against it.

The next puzzle to solve is in the evolution of her sporting career. "Storytelling is where I would like to go. Take my experience and skill, and drive it toward other forms of climbing like ice, big wall and ski mountaineering, and to weave a storyline that has meaning and is attractive to business." She admits that the evolution from a competition climber to a sport/outside climber was challenging because she was a known entity. Finding and keeping sponsors in the outdoor marketplace is a daily conversation. "Covid made me rethink my value to sponsors, because I would travel to events, work the booth, teach clinics—and now most of those opportunities are shelved. But as a strong female climber, my exposure while I am climbing at the crag, using their equipment still has value. This is why I am looking at media to occupy my skills. I can build specific content and produce images and videos, rather than solely being defined as an athlete. I never want to feel like I am climbing for someone else, a sponsor or whoever. I want to always climb (and work) for myself."

Current book: "The Great Quake," A riveting narrative about the biggest earthquake in North American recorded history—the 1964 Alaska earthquake that demolished the city of Valdez and swept away the island village of Chenega, which cemented the science on plate tectonics.