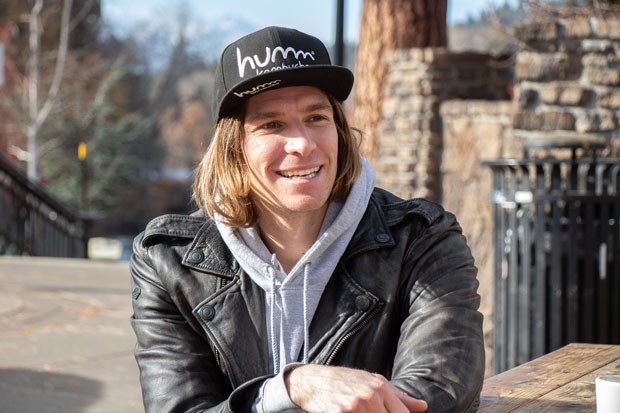 He spends his days skiing down tall mountains and hucking himself off cliffs. Matthias Giraud, aka Super Frenchie, is one of the crazy and dedicated few—and even fewer who are local—who make a living as professional Ski/BASE jumpers. B.A.S.E is an acronym for the four categories of jumping off fixed objects with a parachute or wing suit: Building, Antenna, Spans and Earth. Yes, it's really a thing.


Born in the shadows of the French Alps, Giraud learned to ski at an early age. He was drawn into something bigger when he saw the film, "Pushing the Limits," portraying extreme sports including ski mountaineering and sky surfing.

"There is a scene (in the movie) where Bruno Gouvy is dropped off by a helicopter and ends up falling to his death. I was in complete and utter amazement. It was then, when I was 9 years old, that I saw you could be a part of something bigger and more wild than life itself." Giraud himself is bigger than life, like the energy of a neutron star. His psych for adventure is legendary, his lust for life contagious.

He got the name "Super Frenchie" randomly, during one of the first events he entered in the U.S.

"Having a process and believing in it is my habit. The process keeps me safe. Keeps me alive." —Matthias Giraud tweet this

"I moved to Durango and entered a big air contest. At the top and just before I dropped in for my first run, some guy was waving a French flag. He wrapped it around my shoulders like a cape. I kind of felt like Superman, so on that first run I pulled off a huge front-flip, totally laid out with my arms reaching forward, Superman style," he says. "I stomped the landing to the roar of the crowd! As I rolled up for my second run, the commentator says, 'And here comes Super Frenchie!' The name just stuck."

Giraud is firmly aware of the risks involved in his profession. Many of his friends and colleagues have died. Laypersons don't really understand what draws him back.

"The life can be pretty glamorous. Everything looks perfect in the ski films. High fives, handshakes and people waiting for autographs and selfies," he says. "But when you are in the moment in the mountains...you are alone. Naked. Scared."

The mountains are the core of it all. "Mountains are of a scale that keep me grounded and define my place in the world. They put me in my place. A friend recently asked me why the big mountains feel like they want to kill you? I said, it's because they do," he says. "Sitting at home, behind a desk with all the creature comforts gives me a false sense of security. I have a fireplace to keep me warm, can get a chai latte at the cafe, take a nap or play on the computer. There are no real consequences. When I am in the world of the mountains, I must find the zone, check my emotions and trust my intuitions and abilities," he says. "When ambition and desire take over, that's when it gets dangerous."

Still, Giraud recalls the mistakes he's made. "Those near misses have taught me to be more diligent in my planning, more patient, more in the moment," he says. From choosing the mountain, the route of descent, the equipment, the take-off and landing zones, Giraud is impeccable in his planning. "I was thinking about this just recently and finally wrote it down: Success is in the vision. Survival is in the details."

To that end, Giraud is methodical in his planning. "I am a creature of habit and have learned to respect the checklist, the sequence of things. Always the right ski boot before the left. Always packing my chute standing on the left. It's a way to avoid complacency. Having a process and believing in it is my habit. The process keeps me safe. Keeps me alive."