At the beginning of the year, Jordan Wolfe stepped into the unknown and tried to make a new path for himself—and that path was Wolfe House. He and his wife, Katie, bought a home across the street from a drop-in-center for homeless people in Redmond, and started inviting their friends to come stay with them as they worked to try and "reinvent" community. 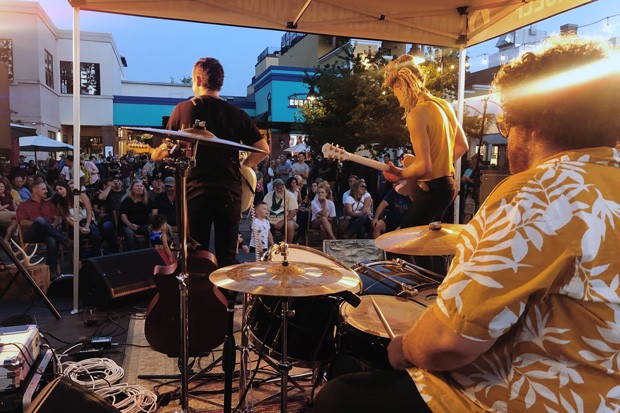 From there Wolfe and his wife would invite homeless people and other community members to their home, where they would host dinners for everyone. It wasn't until a little ways down the road when Wolfe would see he needed to fully commit to this path—deciding to pursue music full time and adding that to his overall mission. Katie handles administrative and marketing while Wolfe is networking and performing. The new organization, Wolfe House, hosts monthly house shows and helps produce gigs in Central Oregon.

"We found that we had a bit of a knack for it and so we started helping other artists whenever we could," Wolfe tells the Source Weekly. "And instead of pastoring in a traditional way, I'm more of a 'renegade community organizer,' just trying to get as many people doing the things they love as possible."

On Oct. 2., Wolfe House helped put on the Redmond Winter Shelter Benefit Concert with Shepherd's House and Music in the Canyon.

"It feels great to give a little back. For our first year and for doing it so quickly we were happy with it but I'm already so excited to level it up next year and do more in that vein," says Wolfe. "Since January we have played, hosted or booked over 100 gigs, but we haven't done anything quite like that benefit—so it's definitely new territory, but at the same time it's not too foreign."

Wolfe House is currently on the lookout for more partnerships and is in the "early stages" of the music scene in Redmond. Wolfe says that with summer ending, the best bet for finding indoor concerts in Redmond is to come hang out at their house shows. Otherwise he mentions Music in the Canyon and Music on the Green as great opportunities for music in Redmond during the summer.

Right now the house shows are on hiatus, with he and Katie having just welcomed baby number two to the world. Shows should resume in December. Other endeavors include prepping for other holiday parties—such as the goodbye bash at Crow's Feet Commons in Bend on Oct. 25.

"I've heard it said that organized hate beats out disorganized love almost every time," Wolfe adds. "My heart is to keep organizing and to help pull people into this life as a professional lover."

For more updates on Wolfe House you can find them on Facebook, and Wolfe says a full website is coming soon. You can also see him perform with his band, Dive Bar Theology, at a countless number of spots throughout Central Oregon.