Psilocybin Therapy Initiative May Appear on the State Ballot

April 29, 2020
comment
The people behind Initiative Petition 34—working to bring psilocybin therapy to Oregon—are close to collecting the 145,000 signatures they need to get the measure on the November state ballot, even in the midst of a pandemic.

The group announced Monday it had already gathered 130,000 signatures, and has pivoted to mail-in and online petitions to replace in-person signature gathering as a result of social distancing measures to prevent the spread of COVID-19.


Psilocybin is a plant medicine derivative found in more than 200 species of mushrooms. It acts differently on the brain than traditional pharmaceuticals which need to be taken on a regular basis, according to Yes on IP 34’s website. At high doses, psilocybin, along with other psychedelics, may induce euphoria, visual and mental hallucinations, changes in perception, a distorted sense of time as well as spiritual experiences, according to Michael Pollan’s breakthrough book on the subject, “How to Change Your Mind.” Psilocybin can also cause nausea and panic attacks.


Researchers began to study the therapeutic value of psilocybin in the 1960s. That research slowed or went underground due to the Controlled Substances Act in 1970 when it became a Schedule I drug. After 1970, in the eyes of the federal government, psilocybin was put in the same category as heroin and other drugs that were believed to be highly addictive and without any medical value. Fifty years later, the Food and Drug Administration has granted psilocybin-assisted therapy a “Breakthrough Therapy Designation” for both treatment-resistant depression and major depressive disorder. In addition, leading medical research institutions such as Johns Hopkins University, University of California, Los Angeles and New York University have demonstrated psilocybin may be effective in treating depression, anxiety, post-traumatic stress disorder and addiction.

Read the Source's deep dive into the subject of psychedelics and therapy in Nicole Vulcan's article, "Psych Trip," published in 2018.

Initiative Petition 34, if passed, would create a licensed, supervised psilocybin-assisted therapy program in Oregon. It would create a strict framework of regulation—overseen by the Oregon Health Authority—to deliver an alternative form of therapy to help Oregonians work through and resolve a variety of mental health conditions. The medicine would only be available legally to people with a therapist trained in guiding clients through the experience. It would not be available over the counter or to take home, nor would it be marketed to the general public. 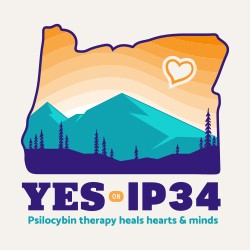 Some cities in the U.S. have decriminalized the medicine within their municipalities including Denver, Colorado, and Oakland and Santa Cruz, California. Initiative PDX-01 was filed this year to decriminalize “psychedelic plant medicines” (according to the measure) including psilocybin, mescaline and DMT-containing plants (like ayahuasca). On a state level, the Drug Policy Alliance—the national group that help lead cannabis legalization in some states—filed Initiative Petition 44 for the 2020 state ballot. That group wants to decriminalize the personal possession of all illegal drugs in Oregon under certain amounts.

But Initiative Petition 34 is not a psilocybin decriminalization measure. The initiative was designed by two Portland therapists—Tom and Sheri Eckert—who run a private practice and counsel couples along with men who’ve been ordered to attend domestic violence programs, according to Oregon Public Broadcasting.

The Eckerts' focus is on supervised therapy. The initiative contains some protections against pharmaceutical companies that might attempt to corner the market. It limits mushroom growers to one production facility, and limits the number of psilocybin therapy service centers that can be owned by a single person or organization, according to the initiative.


Challenges of the pandemic


Tom Eckert said the effects of the pandemic further highlight the importance of this campaign.

“Even before COVID-19 hit, Oregon was dealing with sky-high rates of mental illness—which is why we started campaigning to advance this uniquely effective therapeutic option,” Eckert said in statement. “The stressors associated with the pandemic will undoubtedly push those rates even higher.”

The social distancing measures designed to prevent the spread of COVID-19 bring a variety of mental health consequences: Some people are now experiencing prolonged isolation and confinement, a loss of employment, disconnection from loved ones and friends and anxiety about the future. They may also have reduced access to exercise regimens and social support groups.

The Eckerts estimate they’ll need to raise more than $2 million to both get the initiative on the ballot and then convince Oregon voters to pass the measure, according to OPB. The pandemic hasn’t made the process any easier.

“We’ve been working for years to build a formidable coalition of healthcare professionals, veterans, and advocates of all kinds who believe that this psilocybin therapy initiative offers an important therapeutic option for many Oregonians,” Sheri Eckert said. “And we will not let the current challenges discourage our efforts.”

People can visit the Yes on IP 34 site to contact the organizers and request to see a copy of the petition.