Public Defenders Clash With the District Attorney ▶ [with video]

June 10, 2020
6 comments
Deschutes County’s District Attorney John Hummel held a press conference Monday to respond to the ongoing local and national outcry against police brutality. He delivered a long list of reforms he intends to fight for in the future as well as the social justice accomplishments he’s achieved during his five years in office.

One group of people who looked like they just came from the office said they were public defenders. They began disrupting Hummel's speech not long after it began, asking a dozen or so planned questions. After every question the group shouted in unison, “Act now” or “Black lives matter!”

Public defenders—those appointed to serve as attorneys for people unable to cover the costs of a private attorney—staged protests in a number of cities Monday, including Portland, according to The Oregonian.

One public defender in attendance asked Hummel why he had not insisted on body cameras for the Bend Police Department and the Deschutes County Sheriff’s Office. Another accused him of minimizing a number of cases of police violence and aggression to local media outlets. (Bend Police have, this past week, requested funds to cover body cams.)

One man carrying a large printed sign that read “Black Lives Matter to Public Defenders” stated that the system of cash bail disproportionately harms people of color and asked Hummel what he planned to do about it. He also accused the local police department of targeting homeless people to "whitewash the community for tourists." Another brought up the recent allegations against Hummel’s office by a former prosecutor, Jasmyn Troncoso, who alleges she was racially harassed by co-workers on Hummel’s watch for a year before quitting in May. Hummel released a statement about the lawsuit earlier this month, saying he was "shocked" to hear of Troncoso's allegations.

After the protesters quieted, Hummel said he would be happy to take more comments and questions. 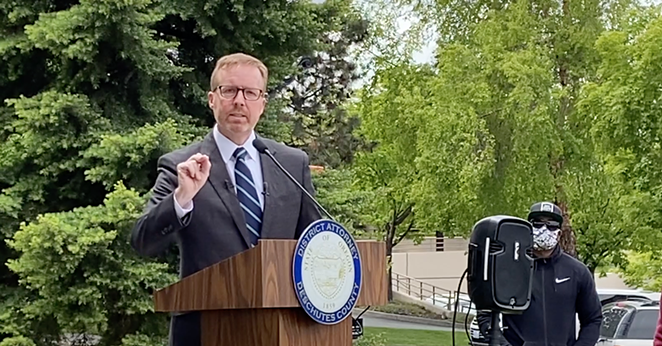 “Today is not the beginning of my advocacy for criminal justice reform, nor is it my final word on the issue,” Hummel said. “I don’t want people to think today I’m here with some pronouncement and it’s going to all be great. You need to know my feelings and thoughts and know that I’m with you for this entire journey, which will never end.”

Shortly after he resumed his speech, he was again interrupted and told “your words are not enough, you’re not acting…” About 20 public defenders and other demonstrators then left the news conference in protest.

Hummel then spoke for over an hour, describing things he plans to do to support social justice: He will no longer accept donations and endorsements from police unions, police officers, or criminal law defense attorneys. He is currently working on a program for young adults as well as veterans (who have been suspected of certain crimes) to help them access appropriate treatment and other services.

Hummel reiterated his intention to “do better” and said that he’ll be starting a Twitter account to keep in touch with the public in real time.

Hummel also had a long list of laws he would like to see passed by the Oregon Legislature. These included:

Note: If you are a public defender and you attended Monday's demonstration, we'd like to hear your story. Please contact laurel@bendsource.com