Public Transit of the Future?

February 07, 2020
1 comment
Door-to-door, on-demand, shared van rides may be the public transit choice of the next generation.

The OSU-Cascades Mobility Lab started Ride Bend in July. It announced Jan. 21 that it will continue to run the on-call ridesharing service through March 30, thanks to a $10,000 contribution from OSU-Cascades' Associated Students of Cascades Campus.

The program was part of a study by the OSU-Cascades Mobility Lab to see if more people would chose to use a ridesharing system as opposed to a fixed bus route.

Here’s how Ride Bend works: Say four people in different parts of Bend’s west side need a ride. Within five minutes of each other, they enter their location and desired destination into the Ride Bend app. Downtowner’s technology crunches the data and comes up with an efficient game plan for picking people up wherever they are, and then taking them where they want to go. This system saves fuel and cuts down on traffic congestion by combining riders with similar destinations or pick-up points.

Ride Bend may only be around until the end of March, so if you haven’t tried it, give the system a test run, and see for yourself. Find “Ride Bend” in the app store on iPhone and Android, or call 866-921-8924 and a driver will pick you up or drop you off within the area shown below:

One of the primary benefits of a ridesharing transit system is the convenience. It’s a lot like Uber and Lyft, except:

-It's free
-It reduces traffic
-It involves riding in passenger vans with strangers (or a few new friends?)

Susan Shaheen, a professor of civil and environmental engineering at the University of California, Berkeley, authored numerous studies documenting how ridesharing services are part of a larger generational trend and could be the future of public transit. Millennials are moving away from personal car ownership because of the cost as well as the convenience of Uber and Lyft.

Meanwhile, Streetsblog.org—a news site that reports on how people can reduce their dependence on cars—reports that ridesharing is nothing more than a glorified Dial-A-Ride, and is not as efficient as proponents argue.

The Ride Bend experiment began in partial thanks to the pioneering spirit of Casey Bergh, the Transportation & Sustainability Program Manager at OSU-Cascades who spearheaded the program. The lab collaborates with a variety of public agencies (including Cascades East Transit) to implement and study the latest transportation technology trends. These were the folks that brought Bend the Zagster Bike Share program in 2016, with 55 bikes spread over eight locations on the west side. (Now they are working to pilot a shared electric scooters program in the spring of 2020.)

Ride Bend began as both a tourist bus and a way to fill in a missing public transit route that once served the students of OSU-Cascades and COCC. During the summers of 2017 and 2018, Ride Bend was a fixed route bus service circling between downtown, the Old Mill District and other tourist destinations. Meanwhile, Cascades East Transit ran a fixed route between the colleges and a few other stops on the west side of Bend, but canceled the service in 2018 because there were not enough people riding the bus. Two separate, mostly empty, buses were circling in different routes around the westside of Bend.

Berge saw this as an opportunity.

Last July, Ride Bend was rebranded as on-demand transit service that would serve as a link between downtown, the Old Mill District and the colleges. Ideally it would help both tourists and college students at the same time. Visit Bend helped with funding and promotion to new visitors, and OSU-Cascades got the word out to local students. 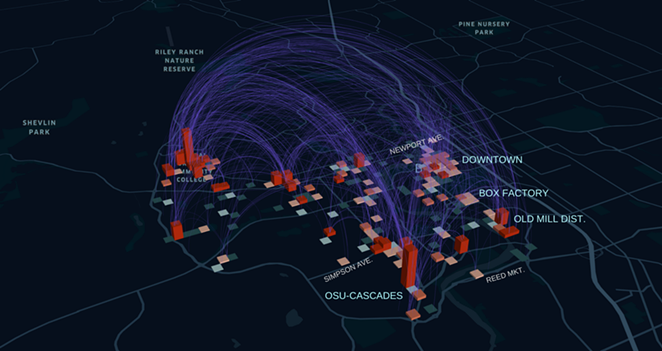 The Mobility Lab hired Downtowner to provide the ride-hailing technology and the vehicles. (The old version of Ride Bend used city buses and rented airport-style shuttles.) Downtower had success with a similar electric taxi program in Aspen, Colorado, where drivers used open air carts, with ski racks and heaters to shuttle tourists between popular destinations and cut down on local traffic. The company also brought expertise in data collection—the Mobility Lab needed exact numbers for their study. The lab wanted to demonstrate that an on-demand electric van service could onboard people who might otherwise balk at the inconvenience of bus schedules.


The data demonstrated that the on-demand version of Ride Bend had more than twice as many riders than the old buses which had run on fixed routes in a similar area. tweet this

The experiment worked. The data demonstrated that the on-demand version of Ride Bend had more than twice as many riders than the old buses which had run on fixed routes in a similar area. It also saved money: services cost $20,000 less than the total operational cost of running buses on fixed-route schedules, while also expanding the boundaries of the service area.

Overall, more than 3,500 unique riders took over 10,000 rides from July 1 through December 13 and left an average satisfaction rating of 4.9 out of 5 stars. The project’s backers (City of Bend, Visit Bend, St. Charles Health System, the Bend Metropolitan Planning Organization and CET) decided to extend the experiment through the fall, and just last week, OSU-Cascades announced it is continuing the service through the end of March.

The Future of Public Transit

The primary goal of the Mobility Lab is to inform government policy by testing different pilot projects. There is a strong possibility that the results of Ride Bend will translate into larger on-demand services in other areas of Bend that are underserved by public transit. Bergh is on the Regional Technical Advisory Committee for CET and said that north and southeast Bend are two areas the group is considering for a similar on-call service in the future.

“At the Mobility Lab, we recognize that there is an opportunity to support what the City, CET and ODOT (Oregon Department of Transportation) are working on with innovative solutions,” Bergh told the Source. “Technology is revolutionizing how we move people, and it will only increase. We want to bring that new technology to our transportation system here in Oregon and help local agencies understand those concepts.”

Other cities around the U.S. are either experimenting or have fully implemented on-demand services into their public transit system. Beyond saving time and fossil fuels, the City of Los Angeles reported that their system also promoted equity: riders who couldn't afford to hail an Uber, or who have wheelchairs or who live in less-densely populated areas can now get to where they need to go.

The Ride Bend experiment is also indicative of a larger shift towards shared mobility. New York City has one of the most successful bikeshare programs in the country with more than 10,000 riders a day. Carshares have been around for years and have seen modest growth: carshare membership was at 1.4 million in 2017 and is expected to grow to 3 million by 2021, according the Wall Street Journal.

But the biggest game changer is that millennials don’t necessarily want to drive. They have far fewer driver’s licenses than Gen Xers or Baby Boomers, and many of them both work and shop remotely, a trend that will only continue in the years to come, according to the AAA Foundation for Traffic Safety.

Meanwhile, Bergh wants to marry two upcoming trends for his next experiment: 5G internet (better, faster, more ubiquitous), and self-driving cars. The Mobility Lab might start an autonomous low-speed shuttle service, he said. There are 260 self-driving buses like this throughout the world, according to the U.S. Department of Transportation. For many Americans, these kinds of shuttles will be their first introduction to self-driving vehicles, according to the U.S. Department of Transportation.

For now, Ride Bend may only be around for a few more months. As more people give it a try and leave a review, public transit planners will have more information going forward for how to invest public funds in future transportation systems.