The El Royale is worth checking into, mostly 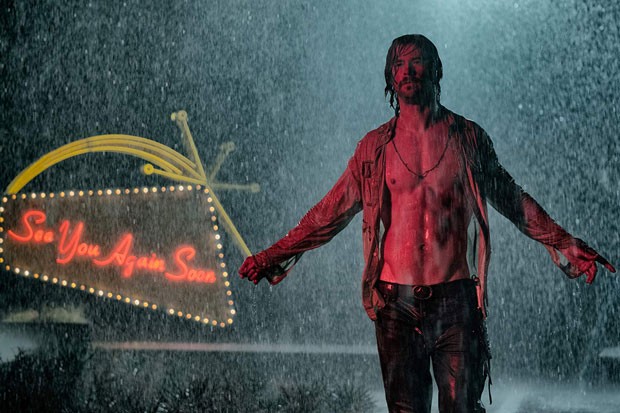 I don't blame "Bad Times at the El Royale" for my inflated and impossible expectations, but I'm tempted to try anyway. I'm what some may call a mega-fan of writer-director Drew Goddard, the man responsible for some of my favorite episodes of "Lost," "Buffy" and "Alias," as well as the deeply misunderstood "Cabin in the Woods."

When I think about the kind of creative writing I'd like to achieve in my life, Goddard and his mentor Joss Whedon are prime examples of what I'm shooting for. For months I've been hyped about "Bad Times at the El Royale," with the trailers looking like a sprawling and ramshackle neo-noir penny dreadful styled like "Pulp Fiction" or "Memento."

For two hours of its 141-minute run time, "El Royale" offers just that: a narratively experimental crime comedy filled with characters keeping secrets, non-chronological storytelling and brief but bloody explosions of violence. The smile on my face just kept getting wider as the story became an unpredictable symphony of murder and lies with bullets flying like one-liners and a wit so dry I was feeling downright parched.

The story is perfect for neo-noir: It's 1969 and four strangers (played by Jon Hamm, Jeff Bridges, Dakota Johnson and Cynthia Erivo) show up at the El Royale hotel on the border of California and Nevada. Each one of them is sketchy and hiding a dark secret, but none quite as twisted as the hidden motivations of the creepy bellboy and the mysterious hotel itself.

The film is jam-packed with commentary on the dying counter-culture movement and the racist and sexist treatment of African Americans, while also being a twist-filled thrill ride brimming with crackling dialogue and flawless performances.

The problem comes with the expectations. Goddard deconstructed and reinvented the horror genre with "Cabin in the Woods," and it seems like that's what he's doing with "El Royale" for most of its running time. Then comes the biggest surprise of all: an ending that feels downright conventional in comparison to what came before. The entire film feels like its building toward something truly mind-blowing, but instead it's a predictable and somewhat safe conclusion that feels like an un-adventurous de-escalation.

For a solid two hours I thought I was watching the next "Pulp Fiction," but by the conclusion I realized I was watching one of those mid-'90s "Pulp Fiction" knock-offs like "Eight Heads in a Duffel Bag" or "Things to Do in Denver When You're Dead." I'm not sure this was any fault of Goddard's, as opposed to my unattainable hype for what he had in store for me.

Either way, I left the theater deflated, realizing "El Royale" didn't reinvent the genre or deconstruct film noir in any lasting way. Instead, it was just content to be a lark: a disposable bit of entertainment from an auteur capable of so much more.