A noodle obsession goes from pop-up to print

A trip around the world, a noodle obsession, a series of pop-up dinners—and now a cookbook! "Punk Noodle – Stories and Recipes From a Pop-Up Noodle Shop" is the latest creative collaboration of husband/wife duo Britta and Benjamin Schroeter Phillips, but Punk Noodle is more than a book; it's a way of being.

"Food is what brings everyone together, no matter what country you live in, no matter what your social standing. The joy of gathering to eat, coupled with a sense of wonder, is something we try to imbue in everything that we do." That's a direct quote from the forward of "Punk Noodle" and the underlying impetus of all things punk and noodle for the Schroeter Phillips'. 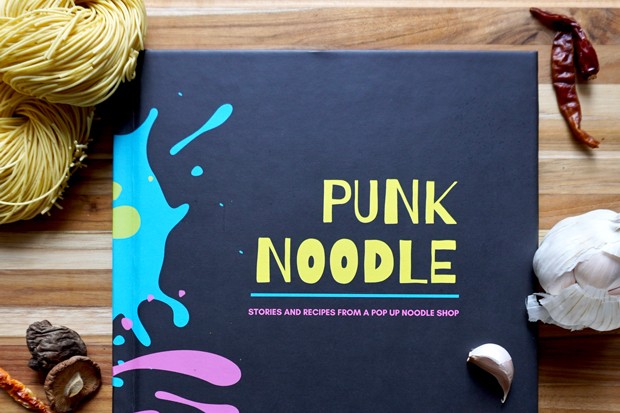 In the fall of 2016 the couple set off on a trip they called "99 Days Around the World," traveling through 10 countries on four continents. They returned home to Bend inspired, wanting to act quickly to create an experience that centered around food and transported guests to a different place.

They planned their very first pop-up within six weeks. That eight-course ticketed dinner called "Tuk Tuk Tuk" was an ode to some of their favorite meals from Thailand and the beginning of a successful series of pop-ups which ultimately became Punk Noodle. It should be noted here that Chef Ben was doing all the cooking for the pop-ups on a tiny, 20-inch electric stove in the couple's small apartment as well as on a mini-Weber on the even smaller patio—but as they point out in the book, "One never needs fancy equipment to make delicious food."

Now, about that moniker, Punk Noodle. After the "Tuk Tuk Tuk" dinner, Ben became obsessed with handmade noodles, working hard to replicate the texture and taste of the fresh ramen noodles they had in Tokyo during the 99 Days trip. He spent months and months meticulously working on the recipe. Once he had it down (ramen recipe #17c), he dreamt of hosting a spontaneous, chaotic, one-night-only pop-up to showcase the noodles. It was while watching noodle videos at 3am that he came up with the name Punk Noodle, deciding that even though they weren't punks, per se, they aligned with much of the spirit of punk: challenging the mainstream along with its inequities and hypocrisies.

That first Punk Noodle pop-up was a blazing success; they sold out all 130 orders of noodles and they knew they had to do it again. But why not open a noodle restaurant instead? Isn't that how things typically progress? As the Schroeter Phillips' put it, "No!"

It was the random nature of Punk Noodle, following wherever the creative excitement leads, not getting sucked into forced growth and feeling pressure to keep growing and getting bigger, that was the attraction.

The series of exhausting, yet totally fulfilling Punk Noodle pop-ups over the past several years have, however, led to this colorful new book, which sprung from the desire to get something tactile out there that people at home could do right now, according to Britta. While they had thought about the book before the pandemic hit, it was forced time at home with no traveling that actually allowed them the time to put it together. 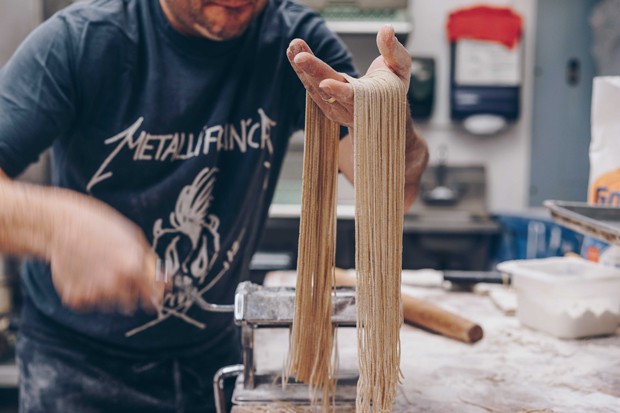 While Ben is the chef and the creator of the recipes—all original, in the new self-published, Kickstarter-funded book, Britta is the artist, responsible for everything that isn't recipes. It's a bright, beautiful, fun book, with recipes ranging from Caramel Pork Wontons to Hong Kong XO sauce to the homemade noodles, including step-by-step instructions and photos on how to roll and cut your own noods.

The Schroeter Philips' say they don't know where Punk Noodle is going next, but "whenever the spirit strikes, we'll do something again with it."

"Punk Noodle was just one idea that we didn't know was going to turn into something that we'd still be doing and talking about three years later," Ben said. He does admit that it might be nice to sell a bunch of books and go around the world again. There are some giant fish in Mongolia that he'd like to try and catch, for one thing.

"Punk Noodle – Stories and Recipes From a Pop-Up Noodle Shop" available at: Newport Avenue Market, The Bend Store, The Workhouse, and at punknoodlehq.com.