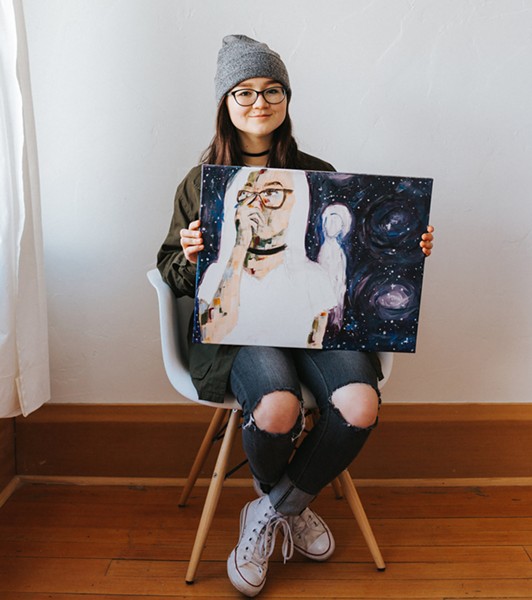 Miina McCown has always loved to draw. This Bend High freshman's talent was recently recognized with one Silver and three Gold Keys from the 2018 Central Oregon Scholastic Art Awards.

Not bad for a 14-year-old whose schedule is too busy for art classes. I met up with Miina at COCC's Pinckney Gallery, where the almost 400 pieces of student art honored by Scholastic were on display. Miina admits that she was surprised to be judged so well, and that seeing the talent among her fellow students was "kind of overwhelming".

Stopping in front of her Gold Key winning painting, she took on the tone of a seasoned artist. Her acrylic painting began as a realistic self-portrait, but she started to realize that it would look "like something others had already tried," so she added dashes of color and an undefined entity behind the central figure to add a question: "the entity could be me, or the person in the front could be me. Where does personality begin or end? I really don't know."

The Scholastic art awards were not Miina's only recent artistic accomplishment. She was also honored by having her digital drawing selected by the Nichiren Buddhist Temple in Portland to be printed on the small wooden plaques on which practitioners write a wish to celebrate the Asian New Year. Miins's artistic success has come with very little formal instruction. She once took an art class at High Desert Middle School, but this year her elective schedule was too full with studying Spanish and playing violin in the chamber orchestra.

While she looks forward to more art classes in the future, for now Miina uses YouTube for instruction. Although she enjoys painting, her favorite medium is her tablet.

"With digital art, all your supplies are right there and don't run out". Family visits to the Portland Art Museum—and the internet—continue to provide much of her inspiration. And while she appreciates the classic drawings of DaVinci, her favorite thing to draw is manga, a form of Japanese comic. Her digital manga style drawings won her two more Gold Keys in the Central Oregon Scholastic competition this year.

The Scholastic Art Competition isn't over. Out of the 827 pieces of art submitted by artists from 21 schools in Central Oregon, 92 works of art received Gold Keys for excellence. Gold Key winning pieces from Oregon now will go on to national judging. Miina hopes to be among the national winners invited to attend the national ceremony in June at Carnegie Hall in New York City.

The National Scholastic Art & Writing Awards program, which began in 1923, is the nation's longest-running and most prestigious award program for artistic teenagers. Past winners include Andy Warhol, Ken Burns and Lena Dunham. Miina and her family moved to Bend four years ago. As a family, they practice the marital art of aikido and study Japanese. She likes Bend, but thinks it's best for "outdoorsy types," a category in which she does not see herself. She prefers to spend her time drawing and sees her future studying illustration or graphic design in Portland before settling somewhere in California.

Participating in the Central Oregon Scholastic Art Awards Competition may help her towards that goal. Five local seniors were awarded $20,000 scholarships to the Pacific Northwest College of Art in Portland this year to continue their art education. Miina's advice to other young artists?

"Experiment with many things on your own. If you think something is going to look bad, you should always try it. Don't be afraid to give something a try."