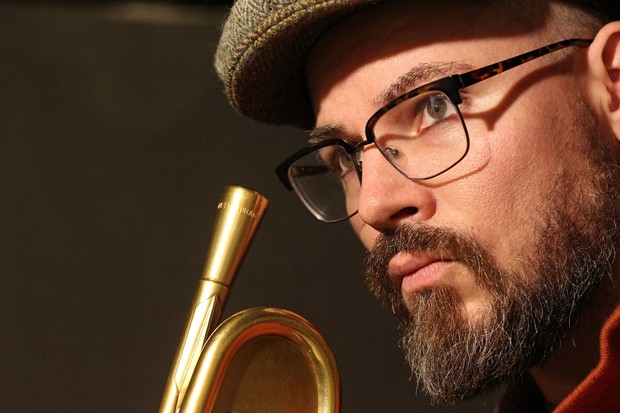 Charlie Porter has had a busy career, with no signs of slowing down. Passionate and talented, the Portland-based trumpet player found his groove on the New York jazz scene while studying classical trumpet at The Juilliard School. Over the course of his career, Porter has spent time playing in jazz and classical musical projects, incorporating Arabic, Indian, Australian Aboriginal and Korean influences.

We caught up with Porter while he was in an Uber on the way to the Portland International Airport, headed for solo performances with the Baltic Sea Philharmonic in Abu Dhabi and Dubai, the two largest cities in the United Arab Emirates. Porter recently released his debut album, bringing together a variety of Portland jazz musicians to round out the sound of his original compositions.

"I kind of had a failed attempt at making a recording when I was 26," Porter recalls. "I say failed because it only had a $500 budget; it was a glorified demo. I decided to wait until I had enough money to do it right. Having moved to the West Coast and restarting my life from the East Coast took a good seven years of readjusting. I figured that for the first album, I wanted to do some variety that features myself and my own compositions in a variety of styles and using a variety of instrumentation and, as it turns out, a variety of players."

Some of the songs are as old as seven or eight years, while others, such as "New Beginnings," Porter wrote a couple months before recording the album.

"I had some older tunes and some newer tunes and I wanted to have some bookends to lock them into place, so that's where the 'Prologue' and the 'Epilogue' come in. If you listen to the 'Prologue' after listening to the whole album, it comprises all of the themes from the middle nine pieces." Put together, the over-arching theme sounds both cinematic and innovative.

On the album, nearly 20 Portland jazz musicians joined Porter to create a snapshot of the current scene. You won't hear the same band or the same exact lineup of musicians on more than one song on the album.

"All of the pianists on this album, the same piano sounds different in their hands, which is really cool to me," Porter says. "It's nice to have one band that you develop and hone, and I'm going to be doing that for the next album. I couldn't decide who to use, so I used everyone — it turned into a really Portland thing. It's kind of a time capsule of the current scene."

Porter financed most of the album through Kickstarter, offering personal trumpet lessons and master classes for those willing to donate.

"I know that it's going to serve its purpose, which is to be listened to," Porter says. "Kickstarter incentivizes people to listen to the music because they've supported the creation of it, they know they were a part of it."