Putting Porcupines on a Pedestal

A surprise pup, found at the High Desert Museum

In our part of the country, where trees were once thought of as a cash crop, porcupines were not thought of as heroes, or worthy of a pedestal. I can recall back in the '50s, when signs nailed to trees and poles all over the forest around Bend read, "Please Kill Porcupines!" Porcupine poison stations were common.

Fortunately, as far as I know, no one pays anyone to kill the poor beasts today. In fact, some porcupines have been elevated to a creature to be admired. 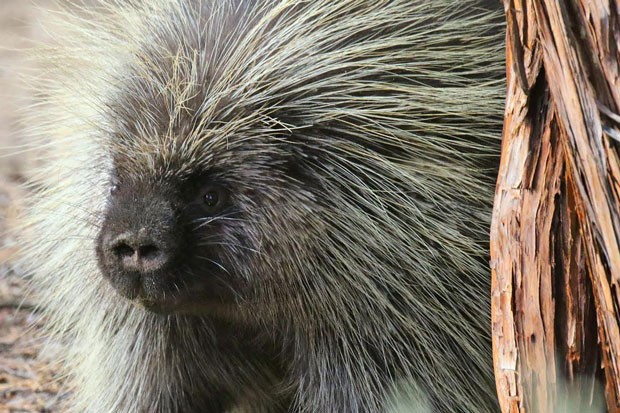 According to an old press release from the High Desert Museum, a baby porcupine born at the museum in summer several years back made her first public appearance shortly thereafter at an elementary school in Virginia—even featured in The Washington Post.

The young porkie (not to be confused with Porky Pig) was named "Magnolia" through a contest won by third grader Leo Higbie, age 9, of Purcellville, Virginia. (I can just hear my crusty old pal, Bob Couch, who I logged with in the '50s, exclaiming, "What?! Name a stupid porcupine!?")

About a year later, Wildlife Ambassadors in Paeonian Springs, Virginia, sent a female porkie named "Honeysuckle" (apparently a rehabbed "education" animal) to the High Desert Museum because she was too shy to leave her cage during school programs. (Considering how we humans treat porcupines in the wild, that was probably good thinking.) Becky Shore, executive director of Wildlife Ambassadors, sent her to the museum with the understanding that any of "Honeysuckle's" offspring would go back to Wildlife Ambassadors.

Honeysuckle shared an outdoor, natural habitat exhibit with the museum's male porcupine, "Thistle," but they didn't seem to like each other, which isn't unusual for porcupines. Because of a physiology that makes porcupines look pregnant most of the time, no one knew she was already expecting. On July 30, an intern discovered a softball-size porcupine pup in Honeysuckle's habitat. Surprise! Surprise!

Cathy Carroll, spokeswoman for the High Desert Museum, said, "I don't want to anthropomorphize too much, but it's like that couple you never think is going to work out but... it certainly did. For there to be any kind of successful breeding, the animals have to be well cared for and feel comfortable and secure in their surroundings." 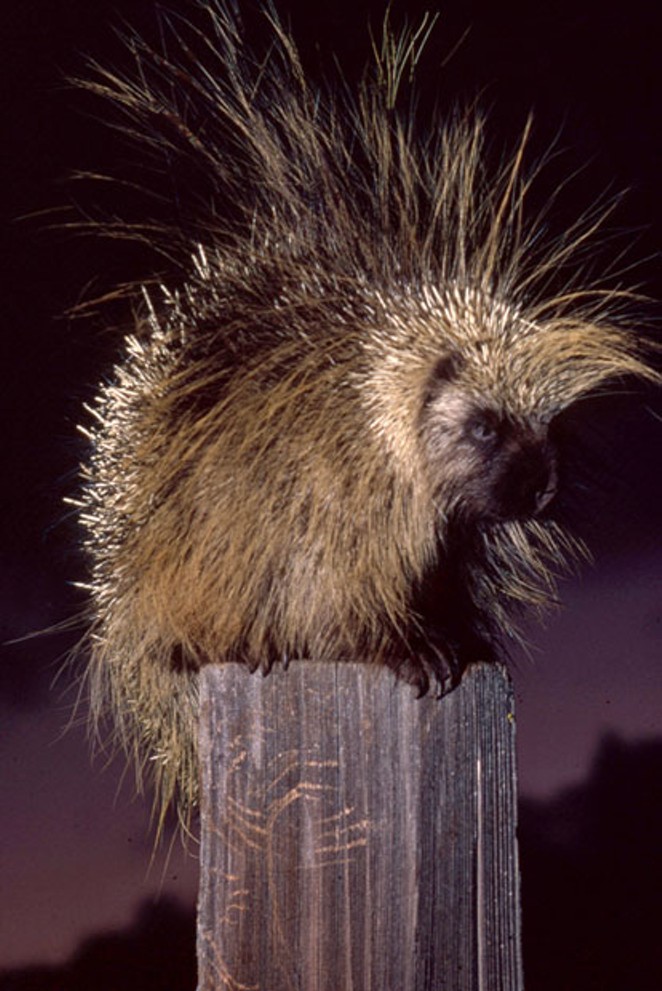 All this reminds me of my first real introduction to porcupines, which took place one winter day in the mid '50s. My brother, Don, and I were in the string of caves by the Knott Landfill, exploring for pack rat middens. (Earlier, I had helped state epidemiologists look for rabid bats in the caves, and fleas in pack rat nests that carry the bubonic plague. We didn't find any rabid bats, but did discover plague fleas in pack rat middens.)

Don and I came to a tight squeeze where ceiling and floor were so close, we had to remove our hard hats and lights and squirm along on our backs with our faces turned sideways. As we wiggled along in that position I said, "Boy, Don, I'm sure happy you don't suffer from claustrophobia." Then I thought I could hear soft rustling and grunting noises ahead of us in the darkness.

"Shhhh, listen..." I said to Don. As we quietly laid there, I could hear the strange noises coming closer, and with supreme effort turned my neck to see what was coming. When my flashlight jabbed into the darkness, red globes came reflecting back, going on and off like traffic lights.

Then it hit me me. I knew what was coming. "Don..." I whispered, "that's a whole herd of porcupines headed our way. Turn your head toward the wall of the cave and — if you can — hold your hands in front of your face."

We both were wearing gloves, so if the porkies came too close and were frightened enough to swish their tails, we could protect our faces from quills with our gloved hands. Thankfully they all went grunting by without any damage to either of us.

Note: Porcupines do not "throw" their quills, which are modified hairs with one-way barbs on the end. When a porkie slaps you with its tail, the quills are quickly embedded in clothing and flesh, released from the porkie's skin.

Normally, porcupines are solitary animals. Females go their way and males go theirs. Except, as we all know, it takes "two to tango" for mammals to reproduce the species.

My theory is that porcupines use sheltered places such as lava caves to get out of the elements on those really cold winter days—also using the time for the boys and girls to get together.

Biodiversity is the key to a healthy Planet Earth, and we don't want to lose any part of it. And while we're on the subject, when was the last time you saw a wild porcupine?