When it comes to sled dog racing, winning a prestigious Humanitarian Award is the marker of world-class canine care

Snow blasts our faces as we race down the Trail of Dreams behind Sunrise Lodge with Mt. Bachelor Sled Dog Rides. Owner Rachael Scdoris can be heard from behind, naming each of the 10 dogs pulling our sled. She knows their likes and dislikes and marshals a list of the adoptive homes ready to pluck each one up when they retire. She encourages them to take breaks and gives positive affirmations when they relieve themselves mid-stride. The love this musher shows for her dogs is undeniable. 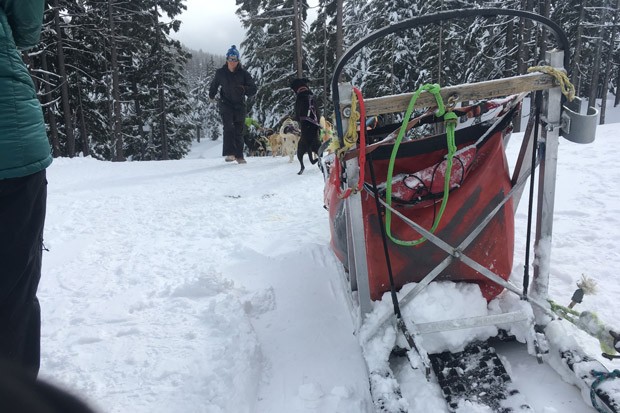 It isn't hard to see that the MBSDR staff provides top-notch care for their dogs.

That's why MBSDR Founder Jerry Scdoris was proud to hear that three staffers—one current and two former—had earned Humanitarian Awards during their respective races, held throughout the Pacific Northwest starting in late January.

Race organizers present a Humanitarian Award to one team in each of the distance and mid-distance races, starting at lengths of 150 to 200 miles. To win, racers have to do something extra in the interest of the dogs, clearly demonstrating the dogs always come first. This may even mean giving up the race.

Veterinarians endorsed by the International Sled Dog Veterinary Medical Association determine the winners at each race, with an aim of actively promoting the well-being, welfare and safety of sled dogs.

"They know exactly what to look for. This is a highly specialized role integral to the culture of sled dog racing," explains Scdoris.

Nick Lehr, who competed in the Tustumena 200, a race over Alaska's Kenai Peninsula, was the first to win the Humanitarian award this year, Scdoris said.

"Him winning blew my mind a little bit. Nick was way back in the standings, it's such a competitive race. He surprised me so much! This was his rookie race in the big time with elite racers—and he won the Humanitarian. I was so proud of him."

Next to win a "Humanitarian" was Gabe Dunham, racing 200 miles in the Eagle Cap Extreme outside Joseph, Ore. Dunham has a team of her own dogs, which she brought to Scdoris' business as an experienced musher. "I felt the same about Gabe's win. She was in the middle back. The Eagle Cap Extreme is really a tough race. It didn't surprise me at all that she won."

Next up came Justin Harris, a five-year veteran of the MBSDR team, who won the award during the Idaho Challenge 150 near McCall, Idaho. Scdoris said he loaned Harris his dogs, something he'd never done before. 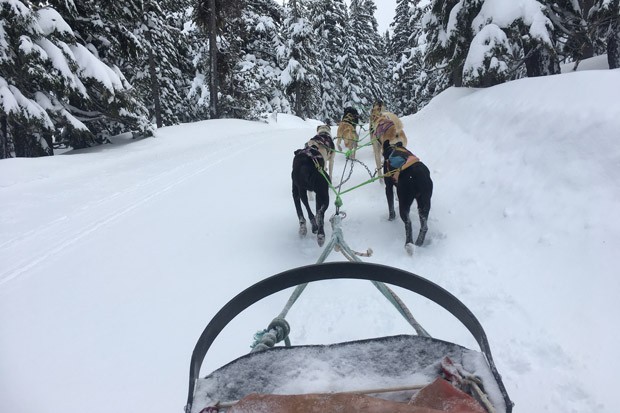 "It's the most rugged mountains, lots of up and down at 7,000 feet. But I knew he would take good care of the dogs. We trained them together since they were pups and it was to fulfill Harris's dream."

Scdoris says there's one rule in his business and in racing: Always take care of the dogs first.

So what sort of animal stewardship does it take to earn a Humanitarian?

"If it's super cool, Harris is constantly putting bag balm between the dog's paws, so the snow won't ball up in between their toes. At rest stops he's constantly checking and massaging—he knows which dogs have a propensity to be hurt... thigh issue, muscle tightness.," Scdoris said. "Harris works on dogs as a preventative thing. He gives the dogs lots of attention—he won't even rest himself. This is a good way to draw the attention of the ISDVM, rather than warming yourself first in the rest huts."

Scdoris is celebrating 42 years of sled dog tours, taking over 50,000 visitors on tours in Bend and Sunriver since 1979. He and his daughter, Rachael, have won the annual 25-mile race, happening the first weekend in March at Wanoga Sno-Park, for many years. (This year's race was rescheduled for March 15-17, due to an overabundance of snow.)


Since retiring four years ago and passing the business to his daughter, Scdoris has raced in the International Rocky Mountain State Stop Race, always finishing in the top 10.

Rachael, meanwhile, is a four-time racer in the Iditarod, which earned her a Woman of the Year award from Glamour magazine in 2006. Since she's legally blind, she also earned Nike's Disabled Athlete of the Year award that same year.

And while the Scdoris family has earned many accolades, ironically, they have not yet received their own Humanitarian award.