Quibi with Your Best Shot | The Source Weekly - Bend, Oregon

Quibi with Your Best Shot

Quibi is disposable streaming in a non-disposable era, and makes me miss movie theaters even more.

April 21, 2020
comment
What do you miss the most during this crisis?

Something stupid and embarrassing that you don’t want to share with anyone? I know right now haircuts are the thing the media believes we miss most, but I guarantee there’s something even smaller that you wish you hadn't taken for granted while it was a commonplace part of society. It can be anything.

Me? I miss sitting in a coffee shop reading comic books or writing before picking a showtime to go to the movies. I absolutely took it for granted, just as I take for granted the fact that there are so many different things to stream that the quarantine could last another five years and I’d never run out of things to watch.

But it’s not the same. I miss reacting to art (or trash) with strangers across a massive screen.

There’s even a new streaming service that just popped up a few days ago called Quibi (short for Quick Bites) and it makes me miss movie theaters even more. 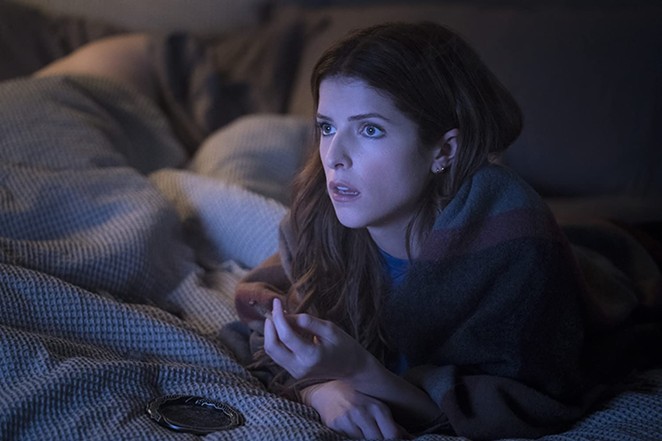 Everything on the platform is under 10 minutes and can only be streamed on your phone or tablet—as long as it’s Apple or Android. My Amazon Fire was summarily rejected.

The three highly original concepts the platform has going for it are pretty novel:

2) Everything is shot to be viewed in either portrait or landscape mode (portrait mode is for monsters tho).

3) They’re focusing on creator driven content and picking some great talents to steer into that idea. I spent a few days doing a deep dive into Quibi’s content and, just like any network or streaming service, there’s a ton of trash and a few diamonds among the detritus.

There’s a new version of “Punk’d” starring Chance the Rapper that made me lose brain cells while watching and Chrissy Teigen hosts “Chrissy’s Court,” an arbitration show like Judge Judy except in this one John Legend pops out and sings every few episodes. These are the kind of shows you can kind of imagine a service like Quibi offering. Diet television. Hollow calories for people wanting to watch something while they’re in line at the bank or waiting for take-out. “Murder House Flip” is just as profoundly upsetting and offensive as you would imagine, where a couple helps homeowners flip their homes no one wants to live in because hella people were murdered there. Just…lowest common denominator trash.
Sam Raimi is leading the anthology charge with “50 States of Fright,” where each episode tells a horrific folktale set in a different state. The Oregon episode is about a creepy taxidermist who gets hired to stuff a Bigfoot, and it’s hilarious. tweet this

But so is “Dishmantled,” a cooking show hosted by the delightful Titus Burgess where the food is launched in a cannon at chefs who have to eat it off of their clothes and the floor, guess the ingredients from taste and then cook the dish. It’s the hokiest thing ever, but Burgess knows it and makes every second of the show guilty fun to watch.

The only truly guilt-free stuff is the scripted content. “The Stranger” is a bats**t insane psychological thriller created by Veena “The Killing” Sud and focuses on a young woman newly moved to L.A. who picks up a psychopathic Uber customer. It’s genuinely horrifying.

Sam Raimi is leading the anthology charge with “50 States of Fright,” where each episode tells a horrific folktale set in a different state. The Oregon episode is about a creepy taxidermist who gets hired to stuff a Bigfoot, and it’s hilarious.

So far though, the only truly unmissable piece of content is “Dummy,” starring Anna Kendrick and created by the brilliant Cody Heller and based on her real life insecurities about her real-life boyfriend, Dan, “Rick and Morty” Harmon’s sex doll. It’s jaw-droppingly profane and honest, with gorgeous writing that Heller deserves the biggest audience possible to discover.

That’s the biggest issue with Quibi that I’ve noticed so far: you can tell they want their shows to be edgy and talked about, but since the shows can’t even be played on a laptop or television, they’re designed to be disposable and, aside from “Dummy” they are.

Quibi is anti-cinema. Of the dozen or so shows I watched for this article, all of them would benefit from a bigger screen and a longer running time. Even more so than Netflix, Quibi is halfway begging their audience to just go ahead and play the next thing, regardless of what it is because, hey, it’s 7 minutes long and what do you have to lose?


Quibi won’t survive the year by treating their audience like Pavlov’s dogs and shoveling another treat into our salivating mouths. It’s almost the perfect creation for Corona Days as something to make noise and flash colors so you don’t have to think or be scared for a few minutes, but that’s too cynical to exist for much longer. tweet this
Even as Quibi quickly poops out daily content hoping just the idea of “original content” is enough to get people interested, it’s the other streaming services that are launching new shows with cinematic gravitas.

Amazon’s “Tales From the Loop” is a visually breathtaking speculative fiction masterpiece based on the paintings of futurist Simon Simon Stålenhag.

Hulu consistently takes huge chances with their original content, whether it’s shows like the post-feminist retro thriller “Reprisal” or the comedic heartbreak of “Ramy.” Even the movies Hulu has exclusively like the masterpiece, “Portrait of a Lady on Fire,” or the overlooked “Booksmart,” shows that they care about quality more than the amount of content.

Quibi won’t survive the year by treating their audience like Pavlov’s dogs and shoveling another treat into our salivating mouths. It’s almost the perfect creation for Corona Days as something to make noise and flash colors so you don’t have to think or be scared for a few minutes, but that’s too cynical to exist for much longer.

Should short attention spans be rewarded or should creators be bucking the trend of fast and disposable at every chance they get? Quibi hopes you forget what you were watching the moment you set your phone down.

So if the best of cinema is designed to effect change in its viewer, then Quibi is its polar opposite: existing as an ephemeral artifact to hold viewers in a form of mental stasis. Don’t worry, everything’s fine, watch these chefs eat spaghetti off the floor.