Racing on the Deschutes | Outside Features | Bend | The Source Weekly - Bend, Oregon

Racing on the Deschutes

Slalom kayaking can sometimes seem a bit backward (literally) if you aren't familiar with the sport. Instead of taking the path of least resistance downriver, racers maneuver both up and downriver to get through specific gates.

If you want a chance to see slalom kayakers battle up and down the Deschutes River, the 10th annual Riverhouse Rendezvous is the event to learn more. The Rendezvous takes place Saturday and Sunday. 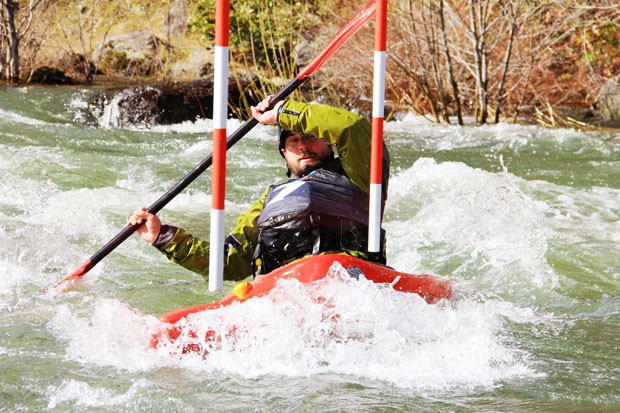 "Slalom kayaking is the same idea as slalom skiing, but unlike skiing, where you are only going downhill, kayakers go through downriver and upriver gates," explained Topher Robertson, programs director at Tumalo Creek Kayak & Canoe and race chief this year. To get through the upriver gates, racers use features of the river, like eddies, to their advantage, while using maneuvers including pivot turns, in which paddlers put one end of the paddle in the water and rotate the entire boat around the paddle.

Gates are made of two tubes hanging slightly above the river, color coordinated based on whether kayakers have to go through them upriver or downriver. Upriver gates are red; downriver, green. To successfully pass through a gate, paddlers must have their head go through the gate without their boat, paddle or body touching the gate.

If racers touch a gate, two seconds are added to their race time. If they miss a gate completely or go through it the wrong direction, 50 seconds are added. Because the entire course is just under 1000 feet, competitive racers can finish in one and a half to two minutes, and recreational races can finish in two to three minutes. This means it's often worth it for racers to backtrack if they miss a gate.

People of all skill levels compete in the race.

"Some people will take this race very seriously, while other people will do it just for fun," Robertson said. "Some people might qualify for Junior Nationals, and for others this might be the only race they do all year."

There are several categories for the race, some based on experience, some on boat type. Some people use sleek, lightweight slalom-specific kayaks, but people also compete in open canoes. Picture someone trying to do a pivot turn in a canoe!

River sports in Bend are not as limited in when you can do them, but more so in where you can do them—something the Riverhouse Rendezvous takes advantage of.

"Due to the flow regime in Bend, and because water in the Deschutes isn't diverting water for irrigation, everything below Bend has enough water to kayak. The race weekend is the last weekend to paddle below Bend, because the irrigation canals start getting water April 1," Robertson said. (Because the Deschutes River flows northward, "downriver," or water "past Bend" is actually north of Bend.)

The section of the Deschutes starting at the Riverhouse on the Deschutes is a popular spot for whitewater kayakers to put in during the winter and early spring months, before the water gets too low in that section. This run is referred to as the Riverhouse Run by kayakers, Robertson said.

The Riverhouse has partnered with Tumalo Creek as well as League of Northwest Whitewater Racers to put on the race. Past race organizer Bert Hinkley has been a major player in putting the event on—though this year he's handing the reins over, since he will be competing in a ski race the same weekend.

Part of the race entry fees will go to Bend Paddle Trail Alliance, a local organization that "enhances river and lake recreation and appreciation for a wide variety of recreational water enthusiasts while promoting water safety, education, and stewardship," according to its website.

Racers will do double duty at the race; when they're not competing, they'll volunteer as gate judges and timers. This is pretty common at kayak races, Robertson said, since the entire race is put on by volunteers.