Racism with a Smile ▶ (with video)

Q & A with Riccardo Waites, founder of the Central Oregon Black Leaders Assembly

Riccardo Waites is the head of the newly formed Central Oregon Black Leaders Assembly, which already has 220 members as of June 9. He formed the group in response to his experiences of racial discrimination while living in Bend for the last 20 years, as well as the desire to create a cohesive political movement in response to police brutality against Black people and structural racism. He's spoken at length at a number of recent Black Lives Matter events in Bend including the protest Sunday in Drake Park. Waites sat down with the Source on Monday to discuss his plans for the assembly and what he'd like to see changed in the local community.

Source Weekly: Tell our readers a little bit about yourself and why you moved to Bend?

Riccardo Waites: I'm 52 years old; I moved here in 2000 from Las Vegas and I'm a naval submarine veteran. I needed to get out of Las Vegas because it's a great place to gamble, but a terrible place to raise children. My brother used to play for the Bend Elks here and he told me about this place. We took a trip out here so I could see it and I fell in love. I wanted to bring my kids to a place that was more community oriented. What really got me is when I drove through downtown and saw Drake Park and everyone riding their bicycles and on their paddleboards.

SW: What is the Central Oregon Black Assembly and why did you start it?

RW: I want to put a protection net around Black people in Central Oregon; I want to put Black people on notice that we're here for them. I want to produce Black leaders. If you're not a Black leader when you get here, we will teach you to be a Black leader. I called it an assembly because we're assembling people together on one common issue. (See COBLA's platform at mycobla.com) I started it the day after I watched the video of George (Floyd) and I cried like most Black people did. My daughters saw it and looked at me like "Daddy, can't you help him?" How can I be respectable to them if I'm sitting there upset but not doing anything?

When my kids go to school and they see people that look like them in their school books and they’re in chains, and they’re picking cotton and they’re beaten and they can’t vote and they have no rights… How’s that going to make them feel in school?—Riccardo Waites tweet this

SW: What has been your experience of racism here in Bend?

RW: When I first got here the thing that grabbed me... I could look at white people in the eye and they would smile. That sealed the deal for me; it's that big of a deal. A lot of the people here are good. As I lived here longer I found out otherwise for some people. I found the police department here is just as corrupt and racist as any other police department. So I had to weigh my options. Do I want to go back to a big city and risk my children growing up that way, or do I stick it out and risk them getting called racial epithets and [experiencing] hard times in school. And I'm still processing that.

SW: Was racism different here than in other cities you've lived in?

RW: I heard a really good phrase for it today. Racism with a smile. It's not heartfelt... Black people can feel when you're not being level with us... just to let you all know we have a sixth sense about that (laughing). 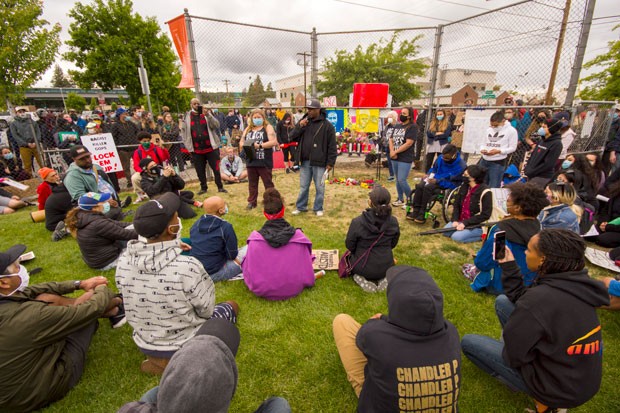 SW: How do you feel like the response has been here in Bend over the last few weeks to your assembly, and what are your plans for the future?

RW: I'll speak for the assembly... as far as response it's been incredible. My inbox is full of nothing but supporters, people offering us things.

I'm going to make sure the assembly handles [racist incidents in Bend from now on]. We have good white people on our team. We will not have another suicide from racist bullying like what happened with Deshaun Adderley. This is not going to happen in Deschutes County.

SW: You have strong opinions about public education and what children are learning in schools about Black people.

RW: I don't want to hear about Martin Luther King anymore. When my kids go to school and they see people that look like them in their school books in and they're in chains, and they're picking cotton and they're beaten and they can't vote and they have no rights... How's that going to make them feel in school? We have a better history than that. They should be learning about the many Black people that invented things we use every day. Why aren't we talking about Malcolm X in school, why aren't we talking about Geronimo Pratt?