Ragnarock You Like a Hurricane | Film | Bend | The Source Weekly - Bend, Oregon 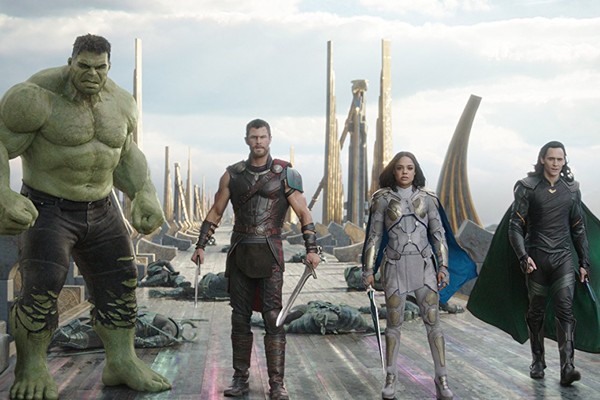 t this point, Marvel Studios can do no wrong. Even if they were barely selling any comic books, the filmmaking side of the corporate mega-giant would keep them chugging away for decades to come. It bears repeating that a huge reason why these movies continue to be successful, not only critically, but commercially, is that the focus has always been on character first, with the plot coming second.

Since 2008's "Iron Man," we've had 17 films in the interconnected Marvel Cinematic Universe, and eight television shows, with several more on the way. While not everything has been golden (I'm looking at you "Thor: The Dark World" and "Iron Fist"), the quality shows a company more focused on creating a massively entertaining sandbox populated with iconic characters than some cynical corporate synergy built around exploiting existing intellectual property.

The movies have a sense of humor and tend to follow a similar template—but watching some of the brilliant filmmakers who have been brought on to shepherd those projects proves that sometimes coloring within the lines can be even more exciting. All the Marvel movies could have just felt like "Comic Book Films" without any variation on the genre, but instead we've got "The Winter Soldier" as a 70's political thriller, "Ant-Man" as a heist movie, "Spider-Man: Homecoming" as a John Hughes-esque teen comedy and now, "Thor: Ragnarok" as a buddy comedy space opera, silk-screened on the back of a denim jacket.

irector Taika Waititi (of the brilliant "What We Do in the Shadows") has crafted something so deeply weird and hilarious that the genre will be trying to emulate it for years. "Ragnarok" is one part "Willy Wonka," one part "Midnight Run" and three parts "Tron" after too many bong rips. Thor sat out the "Civil War" because he came across a prophecy saying that his home, Asgard, would be destroyed in a fiery conflagration known as Ragnarok, so he's spent the last few months searching for answers. After fighting Hela, the Goddess of Death (Cate Blanchett, having the time of her life), Thor is sent to the planet Sakaar, run by the ridiculously strange Grandmaster (a perfect Jeff Goldblum). Thor must fight for his freedom and then put together a team to head back to Asgard to try and save the city.

That's it. The story is simple yet easily the most fun I've had in a theater all year. From the 8-bit, laser light show score by DEVO's Mark Mothersbaugh, the addition of Tessa Thompson as the Valkyrie and Chris Hemsworth's sly comedic timing as Thor (the best use of his talent yet), "Ragnarok" is an instant classic. It's lightweight, but that doesn't have to be a bad thing. The rewatch value is endless and it's so effortlessly entertaining that it's hard not to be amazed that Marvel has once again struck gold. With only "The Black Panther" left before we get to "Avengers: Infinity War" (the movie the entire MCU has been building toward), it's hard not to feel the pang of missing these characters. Congratulations Marvel, you've made me a kid again.

Just for the hell of it:

4: Guardians of the Galaxy