During a July 2017 multi-day river trip on the Lower Deschutes River, around the Olive Grove Camp, a thick haze started rolling in. That was day two. By the time we reached the takeout on day three, the crew was choking on particulate matter. This was pre-COVID and we opted to wear then-rare masks. On the evening drive back home, wildfires were raging Mad-Max style along the highway. Although it made for a pretty sunset, the cost is not reflective of the beauty. Among the casualties: Thousands of acres of forests, weeks of no play for outdoor recreationalists and no revenues for any guiding or outdoor-based businesses.

Rolling into spring, many locals (river rafters included) are wondering how the predicted La Niña winter panned out, and how it would affect wildfire potential for their prized summer outdoor recreation season. 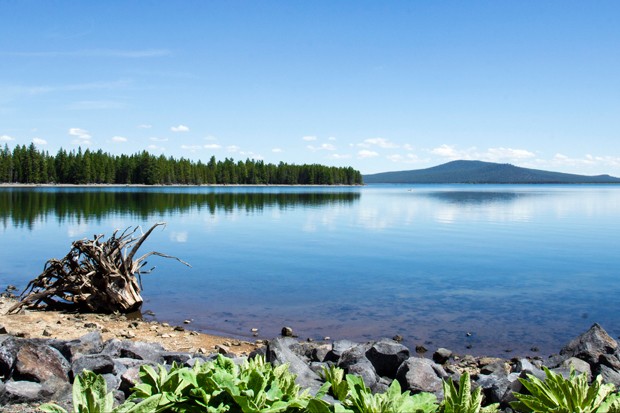 In late November 2020, the National Oceanic and Atmospheric Administration asserted that La Nina would reign (and rain) queen over the U.S. Predictive maps showed swaths of regions that could expect increased cooling and precipitation. Bend seemed to float on the cusp of an interval of a 40% chance of cooler temps and more precip, or no increase in either.

Central Oregon did not see the cumulative precipitation increase we banked on, according to Kyle Gorman, regional manager of the Oregon Water Resources Department. He points to Central Oregon reservoirs' fill lines as evidence. Although Haystack (near Prineville) and Crane Prairie reservoirs were both over 85% full as of April, Wickiup Reservoir, which directly feeds the Deschutes River, held just 52% capacity at that time. As of May 2—with irrigation already underway—Wickiup held 49% capacity; Crescent Lake and Ochoco Reservoir held 26% capacity as of May 2. Gorman's data is obtained from the Bureau of Reclamation's monthly Oregon Basin Outlook Report, put out on the first of each month. It's a joint effort by the United States Department of Agriculture and National Resources Conservation Service.

In comparison to the March 1 report, April 1 fill line forecasts dropped. The May 1 report dropped again.

Snowpack accrual through March is the straw that broke the camel's back in forecasts for northern California and southern Oregon.

"April 1st snowpack conditions are near or above normal for much of the state," observed the Oregon Basin Outlook Report, "with persistent below-normal snowpack in southwest and southeast Oregon. Changes to statewide snowpack in March varied. Snowpack %-normal increased for most basins in northern Oregon. In contrast, snowpack decreased for several basins in central and southern parts of the state." The streamflow input forecast is just as bleak for central and Southern Oregon.

Though outdoor recreationalist (and river rafters) might do well to start preparing themselves for smoky mountain bike rides and low flows in the river, benefactors of irrigation and river wildlife will be the truly disenfranchised locals. Trout, Oregon spotted frogs and many other species, including the Central Oregon farmer will be left high and dry if drought predictions manifest.

"The low flows in Wickiup translate to lower flows in the Upper Deschutes, which will reduce the recreation opportunity in the Upper Deschutes. Also, the biggest impact is related to the North Unit Irrigation District patrons who have to try to make ends meet with about 50% of their normal water supply. This is the third or fourth year in a row where their supply has been limited," Gorman added.

According to the National Wildland Fire Potential Outlook, put out monthly by an interagency collective: "In June and July, the risk of significant fires will rise above average in central Oregon... Precipitation was below average for nearly the entire geographic area in March... Elsewhere there was a deficit of rainfall, particularly on the east side of the Cascades, where many reporting stations tabulated less than a quarter of the normal monthly total."

The report also reminded that, "A strong windstorm in late March resulted in a 200+ acre fire from power transmission lines near Bend, OR that consumed light fuels and some timber." If it's a windy summer, we may be seeing more of this kind of combustion. At least we're all already stocked up on masks.