Serving drinks to thirsty customers is fraught with concerns for bartenders—but customers have a role to play, too. Read what happened during a recent Friday morning at a local greasy spoon.

Some bar owners are throwing caution to the wind, letting people pack their locales. Meanwhile, other downtown Bend staples are removing barstools and hiring bouncers dedicated to enforcing guidelines in every way they can. It's an interesting time for the bar scene, no question about that. Venturing out for a nightcap could be considered brave or brainless, depending on who you ask. 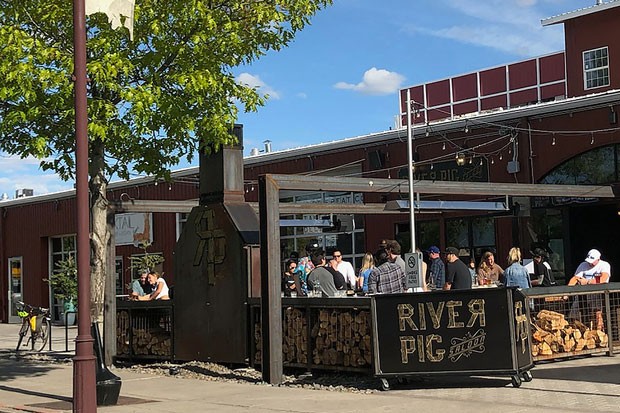 On Friday morning, I ventured out to a downtown bar/breakfast joint for some greasy spoon grub and a little morbid curiosity-inspired observation. The barstools had been removed, the tables were placed 6 feet apart, and all of the employees were fully masked and ready for business. Tables were barren of condiments and place settings, and thoroughly disinfected in between diners.

Would-be customers kept rushing in, despite signage at the front door that clearly read, "Please wait to be seated." These same patrons crowded the register, bringing their dirty glasses up to the bar and candidly speaking with the chefs through the open-concept kitchen window.

I watched in horror as a young woman leaned directly over a fresh tray of biscuits and laughed wetly.

I realized then that regardless of how effectively a bar is attempting to keep up with protocol, it is up to the bar-goers to do their part. Maintaining social distancing guidelines is difficult enough; throwing alcohol into the mix could be a recipe for disaster if we—as customers—fail to graciously accept that things are not yet "back to normal."

This is not business as usual, regardless of the weather.

Davidson Small, a bartender at the ever-trendy Stihl Whiskey Bar in downtown Bend, explained how they anticipated that enforcing social distancing would be the most challenging part of reopening.

“One major precaution we took was waiting to open in hopes of avoiding the ‘cabin fever’ crowd, while simultaneously having staff meetings to ensure that we’re all on the same page as far as the safety protocols and operations that will be in place upon reopening.”—Davidson Small tweet this

"We'll have someone manning the door to ensure that we don't go over capacity," he said. "Of course, this will definitely affect business on nights that we would otherwise be at full capacity all night. Coupled with the newly implemented, mandatory 10 pm closing time, profitability will take a nosedive until more restrictions are lifted. We're prepared for this, and the safety and well-being of our customers is still our number one priority."

A recent Reddit post by an anonymous local bartender on the first day of reopening described the scene, saying, "Customers for the most part respected our rules and were patient... until right before shift change, around 3:30 pm, when it felt like the town sprung back to life. We have a policy in which you must be assigned to a table to be able to order beers and food, as this helps maintain distance between parties. There were enough people coming in later that some began to slip through the host checkpoint and crowd the bar. People demanded beers to take outside and were furious when we explained they took the wrong steps to receive service and our commitment to safety."

Small touched on what additional precautions Stihl was taking—and why the bar delayed reopening past May 15, the governor's allowed reopening date. The bar was set to open June 1.

"One major precaution we took was waiting to open in hopes of avoiding the 'cabin fever' crowd, while simultaneously having staff meetings to ensure that we're all on the same page as far as the safety protocols and operations that will be in place upon reopening. We're all going to be wearing masks, we'll be limiting capacity and seating to comply with state guidelines. There won't be any bar seating, and we'll be removing candles and silverware caddies from the tables so people aren't handling the same objects," Small said.

"Of course, we'll also be sanitizing all surfaces after they've been touched, and we'll have extra sanitation for dishes and glassware. Finally, we're providing a new to-go service for drinks and cocktails. The Oregon Liquor Control Commission is allowing to-go cocktails as long as they have an unbroken seal when they leave the building. We'll be using stickers and mason jars."