Something new came soaring into the Central Oregon skies last week, and it would be wonderful if you'd watch for it: an adult turkey vulture wearing a patagial (wing/auxiliary) tag. 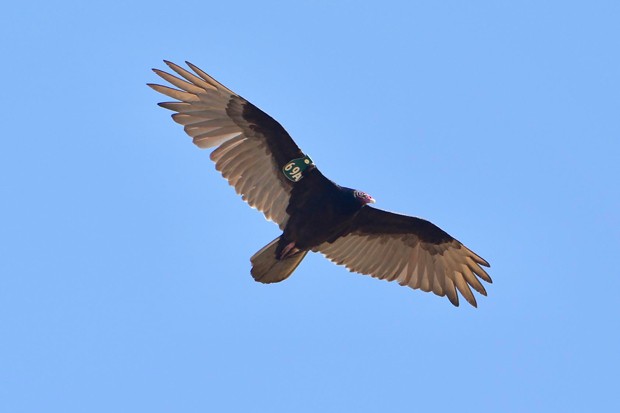 Bird research scientists use patagial wing tags as a tool to check on the movements of large birds. The best-known example are those scientists working with the recovery of the California Condor. Anyone attending the condor lecture at the Grand Canyon has seen condors soaring by, —waiting to be fed—flashing their colorful patagial wing tags used to keep track of individual birds.

Raptors that wander into the traffic patterns of airports are immediately live-trapped, equipped with patagial wing tags and released several miles from the place they were captured. These birds are carefully monitored to see if one or more return. Through such research more is being learned about the movements of several species of raptors, and now it's the TV's turn.

Jaime Desmarais of Bend sent me an email just the other day about a wing-tagged TV that was spotted flying over one of the trails in the Riley Ranch Nature Reserve. While under observation, it came to roost in the top of a Ponderosa Pine.

Seeing the bird at that location at this time of year could mean it's here for the breeding season and could be spotted again by some sharp-eyed person. If you're one of the lucky ones who happens to come across it — or vice-versa — please take special note of the color of the tag and the identifying numbers and/or letters.

Sea and Sage Audubon Society of Orange County, Calif., has placed an announcement on the internet, describing a research project being carried out by the University of California-Davis Wildlife Health Center. It's a study begun in 2008, looking at heavy metal exposure in scavenging birds. The turkey vulture was one of the species that has been live trapped, tagged and monitored. If that study is still ongoing, the tagged bird here could be from that work, or it may be as old as I am.

The UC-Davis turkey vultures have been fitted with tags that are large and white with black numbers—easily visible in flight and when perched. If you're patient, you can easily read the numbers with binoculars and/or spotting scopes.

Now here's where YOU come in! Please report any sightings with exact location, observer's name, date, and tag number to the Bird Banding Lab. The BBL (usgs.gov/centers/pwrc/science/bird-banding-laboratory) has instructions on its website on how to report the sighting of an auxiliary marked bird.) If the tag is white with black numerals and letters, also send an email to chief researcher, (Master Bander) Pete Bloom petebloom@bloombiological.com, and Terra Kelly trkelly@ucdavis.edu.

Another color and numbering pattern could be from Canada, which can also be reported through the BBL website. I'd also appreciate hearing from you: jimnaturalist@gmail.com.

Who knows, one of these days—if shooters stop using lead-based ammunition—researchers in the condor recovery project may consider it safe to release condors raised in the Portland Zoo into the Oregon Outback, or along the Columbia River, where Lewis and Clark saw them when they were exploring the West. Think of the thrill we'll get when we see a majestic California Condor go soaring overhead, emblazoned with a tag saying it is the first California Condor raised in the wilds of Oregon's Outback.