If you get around the music scene in Central Oregon, you're probably familiar with Eric Leadbetter—or at least have heard his name. His very first show in Bend was back in 2008. Since then, Leadbetter couldn't have felt more welcome, stating how he's "fallen in love with the people and the scene" here. Times change, and now the former founder/frontman of Jive Coulis is working in a different space with the Leadbetter Band. 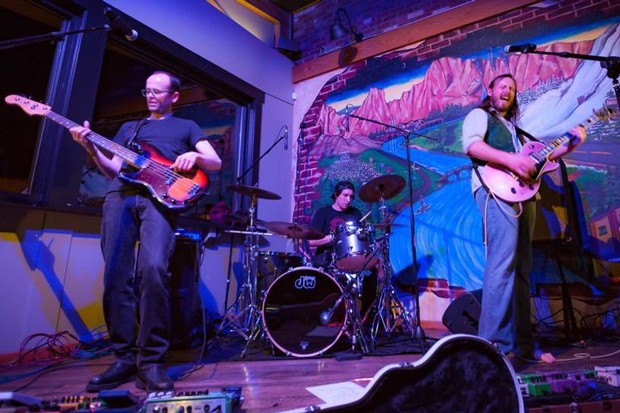 Made up of Patrick Pearsal on bass/backup vocals and Dylan Burnall on drums, the Leadbetter Band will release its self-titled debut album on May 25 with a performance at Silver Moon Brewing. Leadbetter was kind enough to let me get a sneak peek at the album and share a few words as the band ushers in a new era.

"The release feels just like it sounds—a major release!," said Leadbetter. "Over the last year the band has put in so much love, dedication and hard work into these tunes. Albums are snapshots of where the band is when it's recorded. We're feeling so ready to share our hard work with the people!"

For starters, this is a rock and blues record through and through. Track number 8, "Rust," immediately gives you that good feeling from the days of classic rock. Later, on "Heart is the Flower," the band gets a little groovier with its slowed tempo and guitar riffs, as Leadbetter croons about taking time to smell the flowers and be in the moment with his "sweet little woman." It's this strong stylistic mix throughout the album that makes it easy listening.

"We wanted the album to have a consistent sound song to song, as far as having a huge drum sound," Leadbetter says of the band's goals with the album. "Every album has its own defining quality, and this one does, too. There are some great cross-fades between songs that help it flow like a story. That has always been a goal with this album."

If you're looking to get down to some old-fashioned rock, you won't want to miss the release party. The band will perform and also have CDs for sale – and in truth, they might be just as excited as we are for the party.

"We are extremely excited for the CD release show at Silver Moon. The last Jive Coulis album release party was there as well," says Leadbetter. "Obviously there's a lot of history with my journey and that venue so it's extra special to share our debut album with band at one of the oldest breweries in town! I really think people will enjoy this album – it is us."