Rebel With a Cause | Source Spotlight | Bend | The Source Weekly - Bend, Oregon

Rebel With a Cause 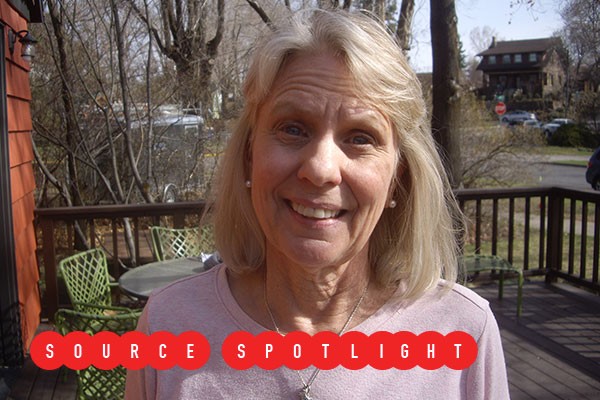 Over by 15th Street and Wilson Avenue on the east side of Bend, there's an old juniper tree that Louise Palmer says sometimes speaks to her. She says it tells her to watch out for all the other urban trees around town. That might be a tall order for the demure volunteer who calls herself a "tree nut," but she's taken on the caretaker role with gusto.

"Ever since I was a kid I've been drawing trees and insipid little weeds," she says. "I've always been a real tree nut. I was always a nature nut."

Palmer helped form the Bend4Trees Coalition about a year ago. The group's first success was getting Bend reinstated this month as a Tree City, USA, by the Arbor Day Foundation. Bend had enjoyed that status for a total of 14 years before losing it a few years ago.

One of the advantages of this status, according to a Bend4Trees handout, is that it shows the community "understands the worth of a sustainable healthy urban forest to their city's overall health." Bend4Trees will have a booth at the Environmental Center's Earth Day activities on Saturday, April 21.

Palmer points out how studies have shown that having more trees in cities even helps lower crime rates. In the sciencedirect.com's 2012 article on Landscape and Urban planning, a study claimed a 10 percent increase in tree canopy equated to roughly a 12 percent decrease in crime in Greater Baltimore. In addition, urban tree programs can help keep water and air clean, improve the appearance and livability of neighborhoods, spur economic growth, and enhance property values. According to a United States Department of Agriculture Forest Service study in 2013, urban trees can remove very small particulates in the air—less than 2.5 microns—leading to the saving of 8 lives per year in New York City alone.

"It is so important that we really retain some of our character," Palmer says, regarding Bend's trees. "We've been cutting down so many trees, the east side is losing any original character. If we start planning and preserving, we can bring it back." Palmer says that Bend Parks and Recreation District and the City of Bend have been "wonderful" about getting involved through forestry programs and establishing a forestry advisory board. She sees the need for more smart growth in Bend. "If we look at it we can come up with good, creative solutions," she adds.

"We need more preservation to keep our urban forests," Palmer says. "We want to work together as a team to come up with what will be best for the future and to have a healthy urban forest."

Palmer says she has been an off and on volunteer at the Environmental Center over the past 20 years, "fighting on different issues as they come along."

Her soft blue eyes light up as she adds, "But I will show up to every party they have!"


"I've always been a hellraiser, and I think I have a lot of rebel spirit in me. The more I work on environmental issues, the happier I am." —Louise Palmer tweet this

Her activism began when she was 19, growing up in her native South Carolina, when she started working against a nuclear power plant. She and her family moved to Bend 21 years ago after living about 17 years in Alaska.

It was the "dry climate and skiing" that attracted them to Bend, Palmer says. "It was like a little, miniature Alaska, except with a dry climate." She is no longer married but has a grown son and daughter living in San Francisco and Portland, respectively.

While speaking with Palmer, one can detect just a wispy slice of a southern accent. It is pretty much gone now, but every time she returns to South Carolina to visit family, it comes sashaying back. She says it takes "about a minute—I can hear my voice changing as I'm getting off the airplane."

What about the curse of the junipers, which have a bad reputation for sucking up so much groundwater? "This is the right place for them, but there's too many of them," she says. "There are not enough ponderosas."

Palmer says she is optimistic that "our actions will provide a healthy, vital community for generations to come."

She says she pretty much gave up her art for 25 years while she worked in the efficient building industry. "I'm a wannabe artist. I'm actually a potter," Palmer says.

Due to health issues, she doesn't ski so much anymore, but walks and swims laps at the Juniper Swim & Fitness Center.

Another one of her passions is working on a film that she wants to write and produce. "Your Home, Your Air," its working title, will focus on more of her interests—indoor air quality, sustainability and energy efficiency.

"This is what really gives me joy," she says about working on the film. "The chances of me pulling it off are one in twenty thousand, but I'm that one."