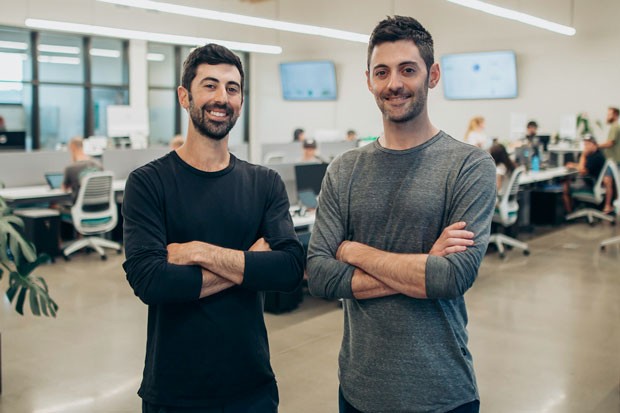 As whispers of the next economic downturn grow to a roar in the national news, two regional economic experts believe Central Oregon will not be "bulldozed" this time around. A host of insulating factors—like sustainable job creation in the professional sector, and an unmet demand for affordable housing—may combine to shield the region from a full-blown recession in the years to come.

Ross and Zach Lipson founded Dutchie—an ecommerce cannabis dispensary platform—two years ago in Bend, and they've already hired 36 employees and won $18 million in venture capital, according to a Sept. 10 article in TechCrunch. The Lipsons are part of a growing sector of tech employers in Central Oregon that may help mitigate the effects of an inevitable economic slowdown in the coming years. Other Bend-based companies like Amplion (pharmacological discovery research) and Apricity (custom design electronics) may not be household names, but start-up by start-up, they are providing well-paying jobs and selling their goods and services outside of Bend, supporting a solid flow of revenue into the City.

"This kind of growth is not particularly sexy," said Damon Runberg, a regional economist for the Oregon Employment Department. "It's not like a new Telsa plant coming in with hundreds of jobs. This is four jobs here, five jobs there, a five-person company turning into a 10-person company."

During the last recession, Central Oregon's workforce was particularly vulnerable because employment in construction and tourism dominated the economy. But while tourism continues to make up the largest share of total private employment, at around 17%, Runberg believes the region's transition from "timber to tourism" is largely a myth. The leisure and hospitality sector of the employment pie has stayed the same since 1990, he wrote in a study for OED, published Sept. 19. While it's true that employment from wood products in Deschutes County has drastically declined, it's professional and business services—not tourism—that have seen the largest gains, he wrote. This includes companies like the tech firms above, as well as everything from engineering to marketing to law firms. 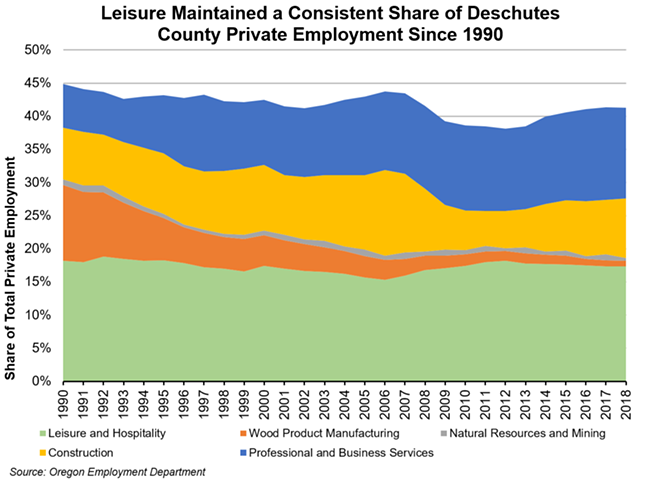 Roger Lee, CEO of Economic Development for Central Oregon, said this trend is a sign that the nonprofit's endeavors are paying off.

"When we were founded nearly 40 years ago, it was in our charter to add diversification like tech and manufacturing to the local economy," Lee said. "We've been speaking around the country about Bend's 40-year 'overnight' success. But it's an effort that's been in place a long time, with one industry and one company at a time."

Just last month, WalletHub ranked Bend the third fastest-growing city in the U.S., and Central Oregon continues to attract highly qualified workers with diverse skill sets from across the country. But one major headwind for newcomers is finding a place to live. — Roger Lee tweet this

Central Oregonians have experienced the longest period of job expansion and wage gains since the 1970s when the Oregon Employment Department began collecting data, according to Runberg.

When the economy is "hot" like it has been over the past few years, it's difficult for companies to find workers. But Lee argues that employment challenges in the region may have more to do with a company's culture than market forces.

"A local insurance company, for example, has been searching to fill positions for months," Lee explained. "But then you look like a company like Laird Superfood out in Sisters [that manufactures coconut sugars and instant coffee inspired by the diet of surfer Laird Hamilton] and they employ 100 people and want to get to 500 someday. They've reported great satisfaction with the kind of talent they've been able to attract."

Just last month, WalletHub ranked Bend the third fastest-growing city in the U.S., and Central Oregon continues to attract highly qualified workers with diverse skill sets from across the country, Lee said. But one major headwind for newcomers is finding a place to live.

Demand—especially for homes on the lower end of the market—is driving prices up, one factor that may protect the real estate market from the devastation that characterized the Great Recession, according to Runberg. In addition, the speculative investment buys of the mid-aughts has largely dissipated and further, mortgage structures have changed, with banks demanding higher down payments and stronger credit from potential homebuyers.

But the need for cheaper houses puts a whole slew of local millennials—in their prime years for home buying—in a holding pattern. Many are shouldered with 10s or even 100s of thousands of dollars in student loan debt, with their wages still lagging relative to their age because they came into the labor market right when the recession emerged.

"I try to push against generational research," Runberg said. "But for millennials, a lot of formational things have been pushed backwards like starting a family and buying a house. That is not to say they don't want these things. Locally, our young professional network is overachieved. They don't seem like they are struggling too much, but probably renting longer than they'd like to, or living with their parents."

Overall, both Runberg and Lee believe that the Central Oregon economy is in a better position to weather the next economic storm, largely because of the growing tech and manufacturing sectors as well as an unmet demand for housing both in Bend and across the country. Runberg presented his forecast to the public during the Bend Chamber of Commerce's "Economic Impact Breakfast" Oct. 31, where he also discussed the possible outcomes of slowing job growth on a tight local labor market.

For an isolated hub surrounded by millions of acres of National Forest and farm lands, Lee thinks the region's economy is stronger than ever.

"At EDCO, we find it interesting when we look at the big picture, because we're just a speck on the map; 5% of the State's population," Lee said. "We're off the beaten path, away from the resources of a large metropolitan area and international airports, but we continue to out-perform not just our peers, but larger places that have all of those resources next door."