Twist open a bottle of Riff Cold Brewed Coffee and you're welcomed to flavor-forward coffee with notes often found in wine—such as cherry, golden raisin and dark chocolate. Without the heat, the process is milder on the beans and creates a less-acidic cup. 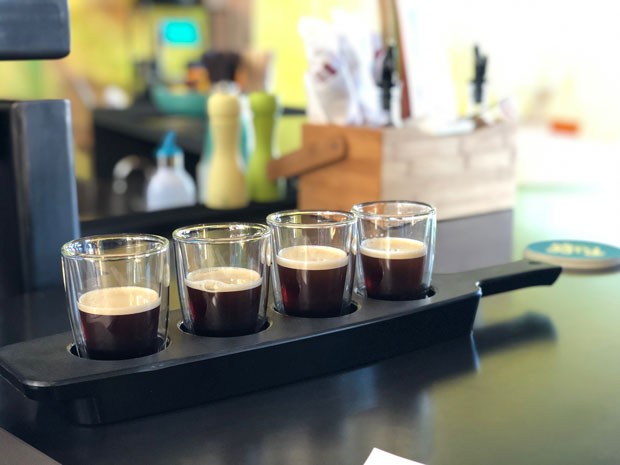 When I heard that Paul Evers—who's worked with craft beverage brands including Humm Kombucha and Crux Fermentation Project—was starting Riff and innovating in the coffee space, I thought he was crazy. That category is flooded with competition and honestly, I couldn't see where there was room for anything new. One visit to the Riff Taproom in The Box Factory and the innovation is clear.

Evers says Riff is "celebrating the flavor wheel of coffee." We've mostly been exposed to light (blonde) or dark coffee, and many people are familiar with roasted, spicy, nutty and chocolate flavors. Evers showed me the coffee taster's flavor wheel, with dozens of flavor profiles stemming from these main characteristics: fruity, floral, sweet, nutty/cocoa, spices, roasted, green/vegetative, sour/fermented and other. The wheel is deep and expands out into specific flavors, including whiskey, peapod, papery, malt, molasses and chamomile, to name a few.

With so much room for flavor exploration it's no wonder the taproom has 30 taps. To take your taste buds on a ride, order a flight, exploring regular cold brew, creamy, fizzy nitro cold brew and what Evers says is the world's first hot cold brewed coffee on nitro. Next, tour the beer collaborations with Crux, Deschutes Brewery, Pfriem Family Brewers and Upright Brewing. Evers says the "spirit of collaboration" is a Riff value. I tried Hold That Thought—a nitro blonde coffee stout created with Crux—a dreamy, perfectly balanced beer I'll remember for a while. In February, Riff will release its collaboration with Humm Kombucha.

Caffeine affects each person differently. I've had cups of cold brew on nitro that have left me buzzing so hard I can't concentrate. Enter the Riff Lift Index, a chart indicating the level of caffeine in a beverage ranging from 0 (1 milligram per ounce) to 8 (50 milligrams per ounce). Each cold brew on the menu shares where it falls on the index. How has this not existed before?

Forget the coffee shop experience at the Riff Taproom—no pastries, pre-packaged food or espresso machines. The space feels like a restaurant mixed with a brewery. You can see all 30 taps at the bar. An expressive mural done by local artist Megan Stumpfig, in collaboration with the community, brightens the focal wall. Plenty of tables and bar seating are spread throughout the space. During my visit, no one had headphones on in front of a laptop. People were chatting over food and drink.

The food menu includes shareable snacks, sandwiches, bowls, soups, salads and sweet coffee-inspired treats. The hummus trio, including carrot, beet and edamame, is an explosion of flavor and colors. Chef Jackson "Rooster" Higdon said he "was inspired by the brand," so the menu explores color through foods such as purple forbidden rice, watermelon and purple radishes and candy cane beets.

The pork brie sandwich includes layers of creamy, spicy and sweet. It's a stack of The Meat Locker pork loin, pepper jam, arugula and soft-ripened brie on a Sparrow Bakery hoagie. The perfect pear salad of coffee-poached pear, spicy coffee crusted pecans, Rogue smoked blue cheese, arugula and apple butter vinaigrette was light and peppery. The coffee notes are subtle and tend to bloom at the end of bites.

Contrasted with other coffee bars, Riff takes the bar part seriously, with five coffee-inspired cocktails, including two on draft. The Cold Fashioned is a play on the classic old fashioned with rye whiskey, bitters, bourbon maple syrup and decaf cold brew. El Jefe marries tequila with cold brew, cinnamon syrup and bitters. Both draft cocktails were boozy, and the coffee brightened the drink without overshadowing the featured spirit.

The Riff Taproom isn't the place to stop for your first cup of the day, since the space doesn't open until 10 am, except on weekends. The space opens at 8 am Saturdays and Sundays, with a breakfast menu including chia pudding parfait, forbidden rice cereal, pan quiche and a baked egg sandwich.