Redmond's adult beverage scene is rapidly expanding. Our staff enlisted the help of a local party bus to check out the range of new options

Redmond, Ore.—the city of roughly 30,000 people that sits 18 miles to the north of Bend—has had a small collection of breweries for at least the past several years. 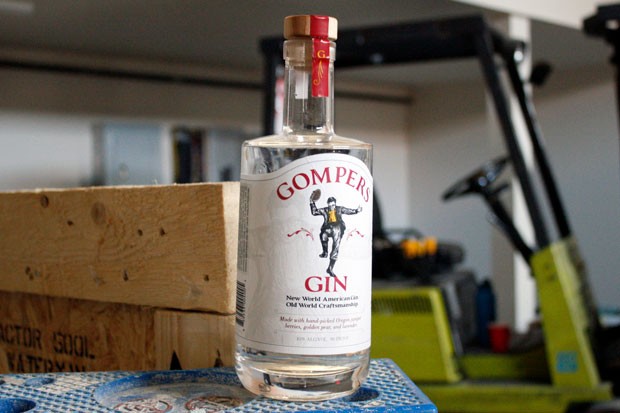 But if the explosion of new spots is any indication, people in Redmond have a bigger appetite for beer these days. A host of new breweries and drink spots have opened in the past year, and we wanted to experience them all—so we got Wanderlust Tours, which specializes in outdoor tours as well as brew tours, to help us out, driving us around on a custom Redmond booze cruise—the ideal way to drink responsibly while touring around yonder Central Oregon.

Here's (an edited version of) what happened while on our Redmond tour.

4 pm Friday: Fourteen Source staffers assemble at our office—quite possibly the largest Source drinking team ever. (Check out our Craft column in any issue of the Source for more of our exploits.)

Gompers Gin had its grand opening party at the end of April—but before that, co-owner Michael Hart gave us our own private tour of the Prohibition-style tasting room, located in the new Jackpine Court complex in northeast Redmond. The Gompers space is stunning, with gorgeous, 1920s-style arts and crafts-style wallpaper and finishings, and a giant wood bar.

The space even has a secret room, accessible only to Founders Club members. We sipped various versions of gin, made with the hand-picked juniper berries that grow in serious abundance in Central Oregon. The Estate Gin is smooth and easy to drink by itself; the Old Tom is barrel-aged and makes an ideal cocktail mixer. Hart says it's even delicious in a Manhattan—normally made with bourbon or rye. 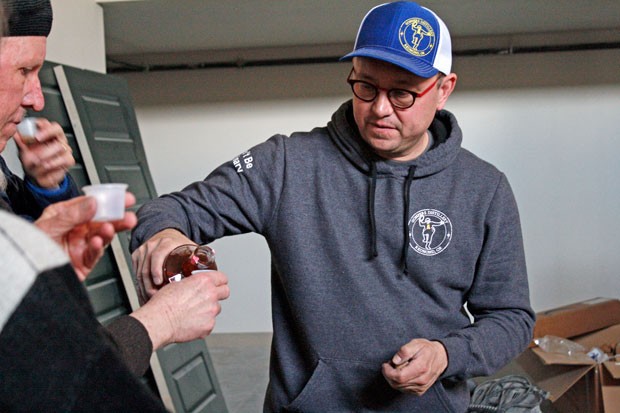 Never had a true cask ale? Have trouble finding places that serve it? Put Redmond on your list. With the addition of Porter Brewing, Oregon now has a total of two cask-only breweries in the state. (Brewers Union Local 180 in Oakridge is the other one.) Porter's owner and brewer Deven Roberts, a longtime home brewer, had such an affinity for British-style cask beers–which are unfiltered and unpasteurized, and pumped from a cask without CO2 or nitrogen—that he built his entire operation around them.

Our crew descended upon Porter's small tap room, ordering everything from the 1772 Porter to a series of Bitters, to the JUSTin Time Stout—named after the workman who helped the team get their refrigeration system up and running to help them finish a batch of beer before it spoiled. The vibe is homey and bright, the beers are delish. Porter Brewing is also the space that can take credit for bringing Bad Boys Barbecue to Jackpine Court. Located between Porter and Dry Fields Cider, the food cart, serving up a host of delicious barbecue items, plus nachos and other dishes, will deliver your food to where you're drinking.

The beauty of Jackpine Court's many beverage offerings: There's something for everyone, including a cidery with a long list of its own ciders, as well as ciders from around the region.

Owner Stephen Fields has created a family friendly atmosphere, with a kids' area, regional artists' work on the walls and long tables ideal for group gatherings. Fields isn't a big fan of overly sweet ciders—so many of his offerings are on the dry side, hence the name "Dry Fields." 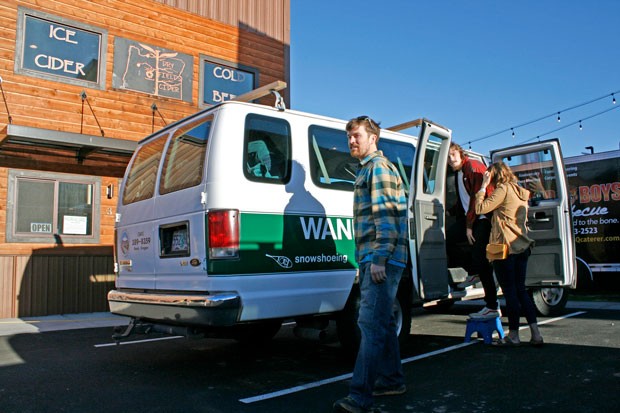 The menu includes cherry, raspberry, blueberry and even banana ciders—along with a few spicy options, such as the salsa and mangopeño varieties. Our crew really enjoyed the spicy ones, and had a fun time in the sunny spot, with the doors wide open to let in lots of fresh air. Life is good at Jackpine Court.

Smith Rock Brewing isn't a new brewery in Redmond—but no one in our crew had ever visited, so we made it a stop on the tour. While there's a large National-Forest type sign outside announcing the place, the building can be hard to miss, since it's a former house, surrounded by a tallish fence.

Inside, the vibe is equally homey. Danielle and Kevin Stewart own and operate the brewery, along with a dedicated crew, serving a full complement of beers that include its delightful Skull Hollow Black Ale—a Cascadian Dark Ale that melds dark beers with heavy hops, the Asterisk Pass Amber Ale—a smooth, easy drinking amber, and the Peregrine Porter—chocolatey and delicious. While we each ordered our own pints, Smith Rock also serves pitchers—the ultimate beer-sharing experience. 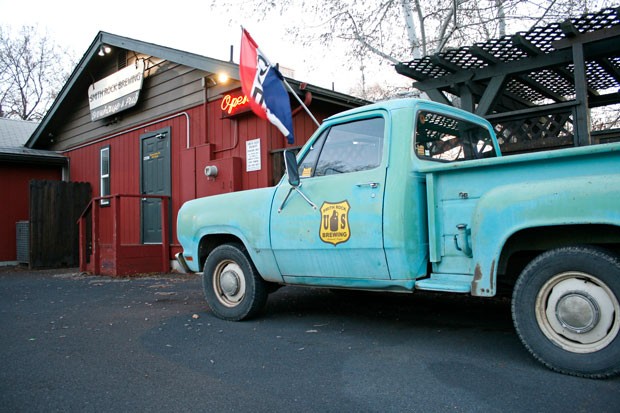 Smith Rock offers a Tex-Mex-style menu, and has an ample patio outside, with fire pits, lawn games and a little window where you can order, without having to go back inside.

Brand new to the scene in Redmond is Initiative Brewing, located in the heart of downtown Redmond. While not officially open during our grand tour of area drink spots, Initiative was hard at work getting ready. The spot features a gorgeous juniper wood bar, and the lineup of beers is right in line with what Northwesterners like: IPAs, IPAs, IPAs—with others including a Belgian and a stout thrown in.

With a pub menu featuring a banh mi sandwich, salads and gourmet burgers—including a Korean BBQ burger—they're on the right track with the food options. With an anticipated opening of May 2019, the Source drinking team will be first in line when they open their doors.

Imagine a cold, snowy evening—or a stiflingly hot afternoon—when being outside, playing lawn games, is precluded by the weather. Then enter Geist Beerworks' vast indoor space, where there's enough room for the brew system, but also for indoor cornhole, and even a food cart, set up in the industrial space.

With the BBQ food cart, Hoggy Style, outside, and more pub grub served inside, ending our evening here was a good move. The space, located just west of Roberts Field airport in an industrial-looking complex, isn't in a location where you'd expect to find a brewery, but since its opening in 2018, the somewhat off-the-beaten-path location hasn't stopped it from being a popular locals' spot quite quickly. 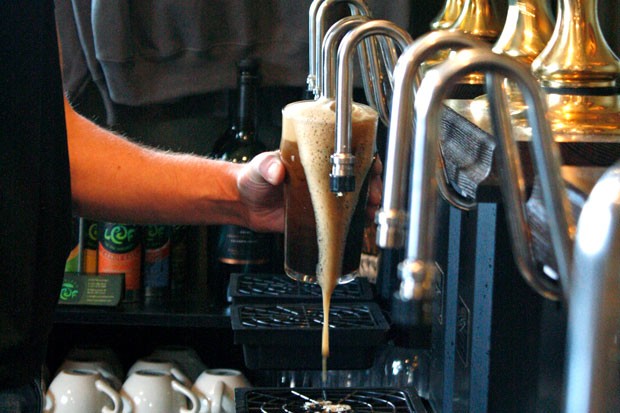 The beers offer something different, too. Co-owner Heather Wales is not shy about saying that many of her beers can fall into the "chick beer" category, with brews that include the Pineapple Express—touted as tasting like pineapple upside down cake—along with berry-infused creations using blackberries, blueberries and more. 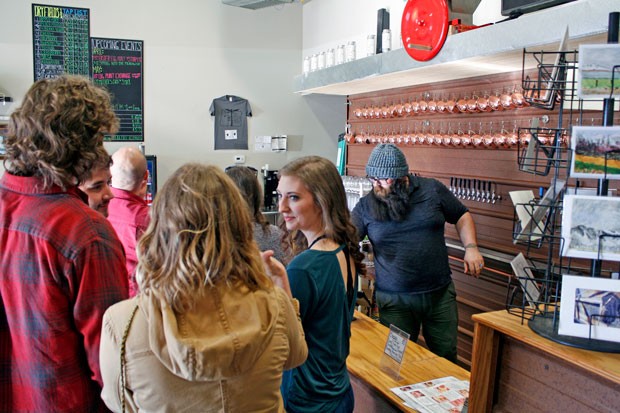