Law enforcement followed up on 24-hour eviction notices, but decided to give some of the larger camps a little more time to clear out 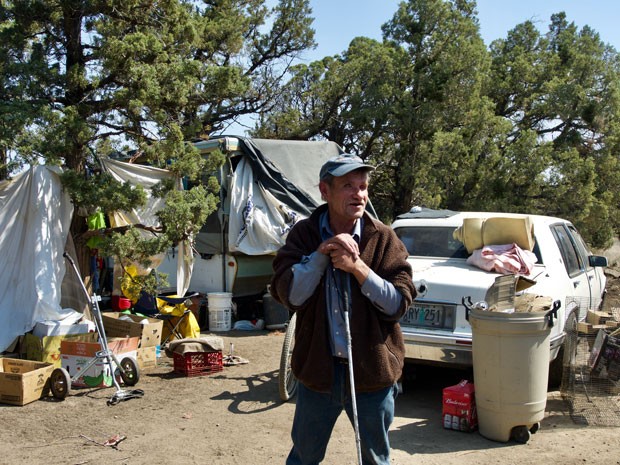 Driving east on Antler Avenue in Redmond across the rutted, potholed road, I stopped my truck near a gate on Central Oregon Irrigation District property. Walking roughly 100 yards south on another dirt road, I saw the first camp, marked by a black car with its front windshield smashed in. A dog barked from behind a Dodge RV. An older woman named Debbie came out.

She and her husband, Smitty, and their dog Little Joe have been living on the COID property for over a year, Debbie said. On May 29, the Homeless Leadership Coalition sent out a media release saying Deschutes County, COID and the Redmond School District planned to evict people on land in the area.

Between sobs, Debbie told me she didn't know where they were going to go, now that the Deschutes County Sheriff's Office had given them a 24-hour trespass notice, stating that "as of June 5th, 2018, at 9am anyone camping in this area is subject to arrest for Criminal Trespass II."

"We're hoping, we don't really know where else, but we're going to try and go over to the other side, over by the canal and up a ways seems to be all right," Debbie said. The area she's referring to is Bureau of Land Management property, where camping is allowed, for 14 consecutive days at a time.

Tuesday morning, five members of the DCSO and one member of the Redmond Police Department were driving around in white SUVs, speaking to people who remained. They weren't citing anyone for trespass.

"After discussion with the COID, which most of the people are trespassing on their property, they are comfortable with us monitoring that and giving them a little more time," Lt. Michael Biondi of the DSCO said. "Because again, a lot of these camps are very established and it's taking quite a while to get things removed."

Biondi estimated there were still 30 to 40 people inside the COID property. He said the biggest question he and his deputies were getting was, where can people go?

"Unfortunately, it's difficult to point them in a particular direction," Biondi said. "Some folks have opted to move to BLM temporarily until they can kind of get their bearings and need to get a more long term plan established."

Debbie and Smitty are lucky. They have a running vehicle with current registration. Others are not so fortunate. There's a man named Mark who's blind, has a broken down Cadillac and a pop-up tent with no way to remove it without help.

Biondi said assistance for people like Mark is limited.

"Some folks also have a trailer but they don't have a way to move it," he said. "They have reached out to some of the local churches and various civic groups for that assistance and that's taking a little bit to get the ball rolling."

This is the second time in the last year the camp has faced evictions. In 2017, an estimated 200 to 400 people were supposed to leave the area by Oct. 31, according to a story in the Source Weekly. Some left, some stayed and some returned to the area. During a meeting at the Redmond Library May 30, members of the Homeless Leadership Coalition estimated about 100 people still lived in the camp.

The Redmond School District owns 50 acres of property near the camp. Public Information Officer Rainer Butler said the district's property is mostly roads that lead to the camp, and the district is looking to sell its land.

"We don't have any plans—it's actually for sale—it's not designated as a school site, so we don't really have a use for it," Butler said. The school district received the acreage in a land swap, Butler said, and is supporting COID and the county in cleaning up the homeless camp. He also understands the human aspect, however.

"These are real people that live out there. Nobody wants to throw somebody out, but at the same time, COID is trying to sell their [land]," Butler said.

COID owns 200 acres in the area, which has been for sale for 12 years, according to ShanRae Hawkins, who works with COID. She says people have been camping on COID land for over 10 years.

"In recent years, the number has spiked with an increased transient population—and the numbers significantly increased after the City of Redmond moved the homeless camps off the old Juniper Golf Club property," Hawkins wrote in an email. "The homeless encampments are discouraging the sale because of illegal activity and public safety concerns."

Redmond's Chief of Police, Dave Tarbet, said at the May 30 meeting that his office gets a large volume of calls about problems in the camp, and that repeat offenders have caused trouble in town.

"We get called out [200] to 300 times a year," Tarbet said. "Some people that we deal with the most come into town and commit crimes. It's been a thorn in our side."

Another thorn, for them, is the eventual cleanup. Deschutes County Property Manager James Lewis said there is plenty of debris, including hazardous waste and human waste on the land.

"We expect this to take a few months over the summer as resources—hopefully volunteers—are available," Lewis said in an email. "There are direct costs to the County—taxpayers—to clean the land. Because of the combined efforts to clean the land and hopefully reduce costs, we do not know exactly what the cost will be—it will likely be in the thousands of dollars, though."


"These are real people that live out there. Nobody wants to throw somebody out, but at the same time, COID is trying to sell their [land]." —Rainer Butler tweet this

Hawkins' estimate of cleanup time and costs are higher than Lewis.'

"Clean up of this property will likely take a year or more," she said. "Going forward, COID anticipates approximately $200,000 in cleanup expenses."

Officials from both COID and Deschutes County said they've been working for over a year with landowners and community partners to find a solution to the homeless camp. Last summer, some roads had 120-day notices posted on them before closure. Law enforcement took no action and some roads remained open for people to leave.

"We are hopeful that with the support of local social service agencies, we will find housing opportunities for these people," Hawkins said.

"The hope was that through the road closure and soft approach—including working with the social service agencies and organizations—that enough time and assistance would be provided to help those who remain on-site," Lewis said.

Organizers from Bend's Sagewood Sanctuary say they continue to work toward longer-term solutions for the area's homeless population. Created in 2017, Sagewood's warming shelter is a "low-barrier" shelter, where people are not required to be sober or required to participate in faith services in order to use the facility. Sagewood's goal is to have a year-round managed homeless camp with supervision, sanitary facilities and outreach services.

"We know what we need to do, we just need a piece of property," Sagewood Sanctuary Director Sally Pfeifer said.